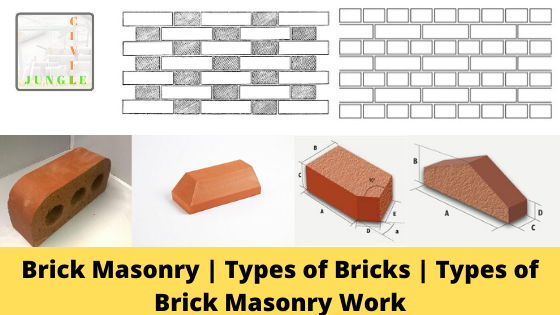 What Is Brick Masonry?

It is constructed by placing the bricks in the mortar in an orderly manner to produce solid loads, which withstand excessive loads.

There are a number of types of bricks and mortars that can be used to manufacture brick masonry. 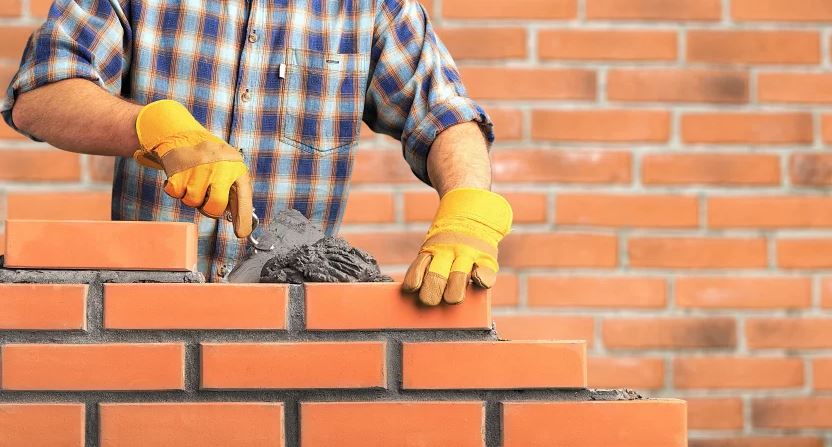 Bonding in brick masonry, which adheres to bricks simultaneously, is constructed by filling the joints between the bricks with suitable mortar.

Special precautions must be practiced since the mortar is mixed and placed as it greatly affects the performance and durability of the masonry structure.

Classification of Bricks Based on Size Modification.

In construction, there are places where a right rectangular shaped brick would not be suitable. It has to be modified.

Such bricks are required in plinths, corners of walls, and coping.

There is a long list of bricks of such a special size. We will discuss the important ones here. 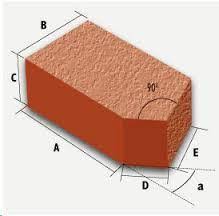 They are cut at a corner at an angle of more than 90 degrees. They are required to shape the outer or inner corner in a wall. 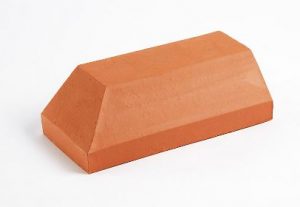 They have a level or part, width-wise, length, or in both directions. The individual shapes are grouped under gleaming bricks, which are also made for use indoors and windows, vents, and plinths. 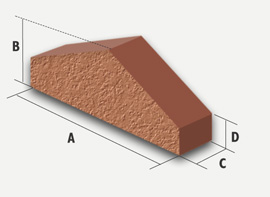 They are used for coping on the walls to give them a good appearance and can also be used for easy drainage of water.

When a coping is to be provided to a wall, a particular shape may be desired. Chuffed, half-round, and saddleback bricks are some common imitating bricks. 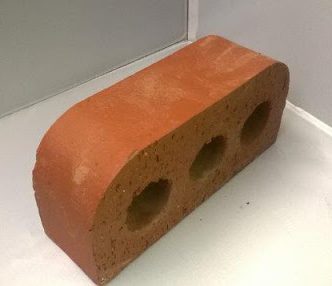 Bullnose bricks are used on the sides of the wall to obtain round corners. It is a standard brick with one edge rounded.

It is similar to the bullnose, but it has both sides rounded to one side. It can also be called double bullnose bricks. They have the same use as bullnose, but they only give additional roundness.

There are almost as many ways of classifying bricks as there are different types of bricks.

But if you classify them based on where they go, you need only remember two: facing bricks and backing bricks.

If you are talking to someone about the types of bricks used in construction, there is a good chance they will classify the bricks they use based on raw materials. In that case, you should know five basic types.

Burnt-clay bricks have good resistance to moisture, insects and erosion and create a good room environment. They are medium in cost and have medium-to-high compressive strength.

Bricks can be made with sophisticated factory methods, simple labor-intensive methods or a range of mechanized technologies in between. Burnt clay bricks are made by placing molded clay into a kiln and firing it up.

These bricks are kind of like white bread: They are versatile and can be used in a lot of different ways, even if they’re not the most exciting bricks in the world.

Because they’re so popular and widely used, talking about types of brick masonry without mentioning burnt clay can be a challenge.

There are four classes of burnt clay brick, with first-class offering the best quality and most strength.

It is made of concrete. It is the least used bricks. It has low compression strength and is of low quality.

Concrete brick is a mixture of cement and aggregate, usually, sand, formed in moulds and cured.

Concrete pipe is made of cement, aggregate and cured as above. These bricks are used above and below the damp proof course.

These bricks are used can be used for facades, fences, and internal brick-works because of their sound reductions and heat resistance qualities. It is also called mortar brick.

These are a mix of sand, lime, and fly ash. The materials are bonded through a chemical reaction that takes place in the middle of wet mixing.

If you are looking for a brick that can carry its own weight, try these. They are famous for their stellar load-bearing capacity.

Fly ash clay bricks are manufactured with clay and fly ash, at about 1,000 degrees C.

Some studies have shown that these bricks tend to fail poor produce pop-outs, when bricks come into contact with moisture and water, causing the bricks to expand.

Ordinary building bricks are generally rectangular in shape, solid in structure and made of suitable types of brick-clay.

In building construction, however, modified shapes, bricks of porous or hollow structures, and materials other than clay are also sometimes used.

A familiarity with this particular classification of bricks is quite important for a construction engineer and an architect. We will discuss them below.

Types of Brick Mortar There are two types of Material. It is as follows.

There are various Types of Bonds Commonly used in Brick Masonry. 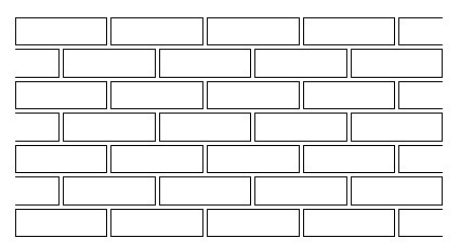 Stretcher bonds are typically used as a facade for the main structural building. It may look very plain, but very effective with the introduction of other patterns.

Often this bond is used in garden walls, but when considering landscaping you should look for other attractive bonds such as English bonds or Flemish bonds. 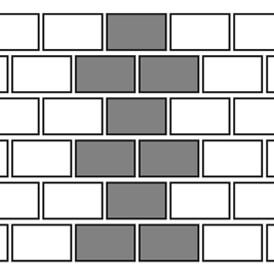 The header is the short face of the brick as seen in height. In a standard brick, it has a 90 mm × 90 mm face.

In header bond brick masonry all bricks are arranged in header courses as shown in the above fig This type of bond is useful for building a brick thick walls. 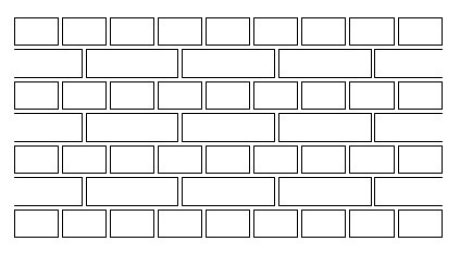 English bond brickwork is where bricks are placed in alternating layers of headers and stretchers.

The traditional way of laying the course is often replaced by 1 course of headers, then 3–5–7 courses between stretch courses, referred to as garden wall bonds.

Like the Flemish bond, it can be a very difficult bond to get right and will take a lot of practice. 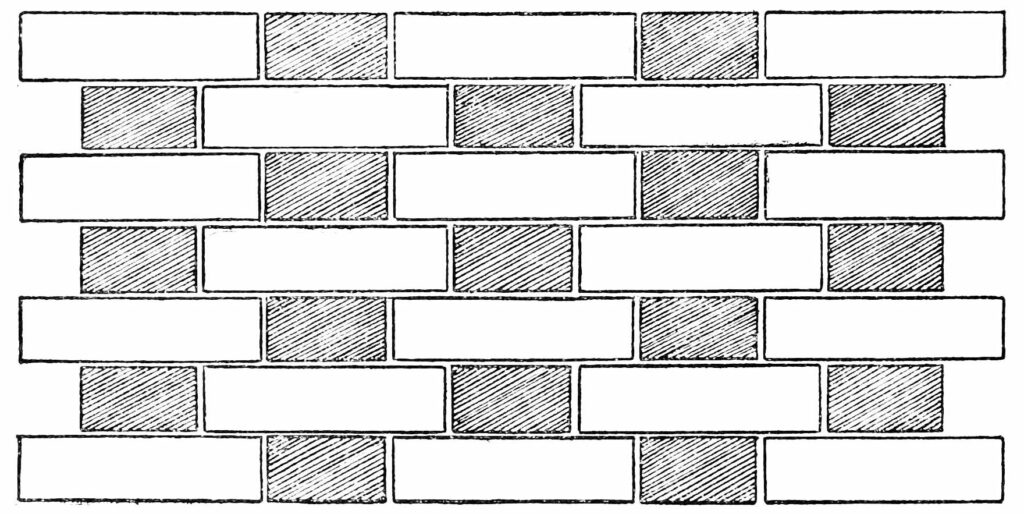 These are alternative bricks that have been placed as headers and stretchers in every course. Each header is placed up and down immediately in the middle of the stretcher to maintain it evenly.

Flemish bonds, like others Bond, are rarely used on new modern buildings and are more suited to garden walls and feature structures. This can be a very difficult bond to get hold of because it requires great attention to detail.

Brick masonry is defined as the placement of bricks in a systematic manner using mortar to bind the bricks together and create a solid mass that can withstand a great deal of pressure. There are different types of bricks and mortars that are used to construct brick masonry.

What Is Brick Masonry?

Brick masonry is a highly durable form of construction. It is built by placing bricks in mortar in a systematic manner to construct solid mass that withstand exerted loads. The bond in brick masonry, which adheres bricks together, is produced by filling joints between bricks with suitable mortar.

Brick masonry is a highly durable form of construction. It is built by placing bricks in mortar in a systematic manner to construct solid mass that withstand exerted loads. The bond in brick masonry, which adheres bricks together, is produced by filling joints between bricks with suitable mortar.

Types of Bricks for Homes

Depending on your needs, each type of brick offers its own aesthetic and structural integrity. There are four basic types of bricks to learn about before you begin your project: structural bricks, fire bricks, veneers and pavers.

What Is Masonry Work?

Masonry is a construction method that uses individual units, like brick and stone, bound together with mortar. It is one of the most durable construction techniques in the world, and it has been popular for centuries.