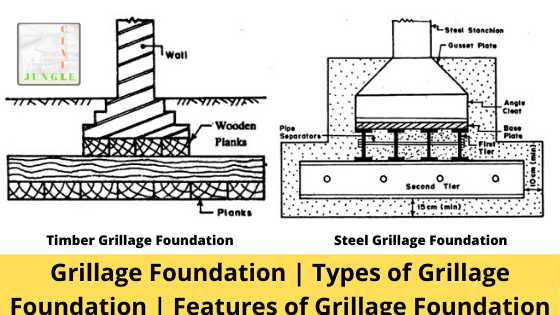 A foundation consisting of one, two or more layers of beams (typically steel) superimposed on a concrete layer to disperse the load over a large area is a foundation for grilling.

It is used at the base of the columns. These layers are wrapped in concrete and are at right angles to each other. This type of foundation is generally used for pillars and column scaffolds with a heavy structure.

Although the foundation and the grid look the same, they are different. Where the foundation transfers the load from the structure to the ground, the grid disperses heavy loads over large areas.

Here, two different types of grillage foundations are as follows.

The Steel Grillage foundation consists of joints or steel beams supplied in single or double layers. Its name defines its function and structure, as it is composed of steel beams, structurally known as rolled steel beams.

A minimum coverage of 10 cm is maintained on the outer sides of the outer beams, as well as above the upper flanges of the upper layer.

The depth of the concrete must be at least 15 cm. After leveling the base and pouring the concrete, we must check that the compaction is done properly and that an impermeable layer of a thickness of not less than 15 cm is formed.

It protects steel beams from groundwater, which can lead to corrosion. Then, we place the first layer of beams on the concrete bed at a distance of 100 to 300 mm, with the help of tube separators.

Then, we pour concrete between and around the beams of the first layer. After that, we place the second beam level at right angles to the first levels with the help of the separator.

Then again, we pour concrete between and around the steel beams. In doing so, we connect the steel supports to the top layer with the help of a base plate, side angles, and a reinforcement plate.

These connecting elements are also embedded in the concrete to make the joint rigid.

The timber-type foundation is provided for masonry walls heavily loaded with Timber columns.

This foundation is especially useful in flooded areas, where the carrying capacity of the soil is very low and where the load on the soil is limited to 50-60 KN/M2.

Timber planks and Timber beams are used instead of steel beams. there is no concrete enclosed between the Timber joints.

However, the lower concrete supplied in the steel grid is replaced by a Timber platform built with Timber planks.

The excavation of the base is level. The bottom layer of Timber boards of size 20 to 30 cm and width of 5 to 7.5 cm thick is placed side by side, with no space between them.

Above this layer, a Timber beam of the same section as that of the Timber post is placed at a right angle.

Then, another layer of planks is placed again at right angles to the direction of the beams. The top layer of boards maybe 7.5-10 cm. Thick, extending the entire width of the base of the wall, on which the masonry wall is built.

For the grating foundation project, it is necessary to calculate the loads and moments of the superstructure.

From this, we need to determine the base area required for an adequate allowable ground bearing pressure of the condition.

Dividing this area, we will find the numbers and the size of each grid layer. Next, we have to design the layer so that it slopes from the edge of the layer above.

It will determine the beam sizes needed to withstand bending moments and shear forces.

The grid cannot be enclosed in concrete and in order, as the composite action of the beam and concrete will be demoralized. The method of construction and loading must be compatible with the needs of the project

Installation of the Grillage Foundation

The steps for installing the foundation for grilling are shown below:

A Grillage Foundation is a type of foundation often used at the base of a column. It consists of one, two or more tiers of steel beams superimposed on a layer of concrete, adjacent tiers being placed at right angles to each other, while all tiers are encased in concrete.

What is a Grillage foundation?

A foundation which consists of one, two or more tiers of beams (typically steel) superimposed on a layer of concrete to disperse load over an extensive area is grillage foundation . It is used at the base of columns. These tiers are encased in concrete and are at right angles to each other.

Is Grillage Foundation a deep foundation?

Is Grillage a code for foundation?

Grillage foundation is the most economical foundation in case of transferring heavy loads from columns to soil of low bearing capacity. A type of foundation often used at the base of a column.

What is timber Grillage foundation?

The foundation uses timber planks and timber beams in the place of steel joists. This foundation is specially useful in water logged areas where the bearing power of the soil is very low, and where the steel beams may get corroded due to subsoil water.

How do you make a Grillage foundation?

Construction Procedure of Grillage Foundation are as follows.

What is a Grillage beam?

Grillage foundations consist of a number of layers of beams usually laid at right angles to each other and used to disperse heavy point loads from the superstructure to an acceptable ground bearing pressure.

What is a steel Grillage?

Steel Grillage foundation consists of steel joints or beams which are provided in single or double tiers. Its name defines its function and structure as it is made up of steel beams, structurally known as rolled steel joist.

What is Grillage in engineering?

A footing that consists of two or more tiers of closely spaced structural steel beams resting on a concrete block, each tier being at right angles to the one below.