What Is Inverted Beam?

So, the height of the Inverted beam is the same as the normal height of a beam, as may be noticed in as per below fig. Lastly, strict and rigid architectural considerations led to the provision of inverted beams. In this manner, the load which could be brick wall will be dealt with, and the height of the floor won’t be compromised.

In this article, different aspects of reinforced concrete Inverted beams will be discussed.

Inverted beams are the same as upstanding beams. As already mentioned in some answers, it is used for headroom clearance.

Bottom line is, wherever there is a restriction on maintaining a certain level of beams due to reasons like aesthetics/maintenance purpose, we increase the level of beams.

Technically speaking it is not the same as putting higher reinforcement on top of having a flexural tension at the top and so I personally don’t prefer to call it an inverted beam, and rather calling it an upstanding beam should be better.

Why Is Inverted Beam Used?

The concept of an Inverted beam originated from a flat slab concept. Inverted Beams only means to spread the concentrated load of the beam on the slab area.

Where Did It Use in Buildings?

Inverted beams are usually inserted over the slab where the slab flat is considerable.

The inverted beam is provided slab bottom level to an above slab. It provided as the main beam. This gives a neat and level ceiling surface that’s good for the look.

How to Design an Inverted Beam?

The design of a hidden beam is the same as a conventional beam, but its depth is restricted and shouldn’t be greater slab thickness.

Therefore, it might be required to increase the reinforcement ration and width of the beam to overcome this restriction to a certain degree. Also, read: IS 516:1959 Most Important Point (Method of Tests For Strength of Concrete) 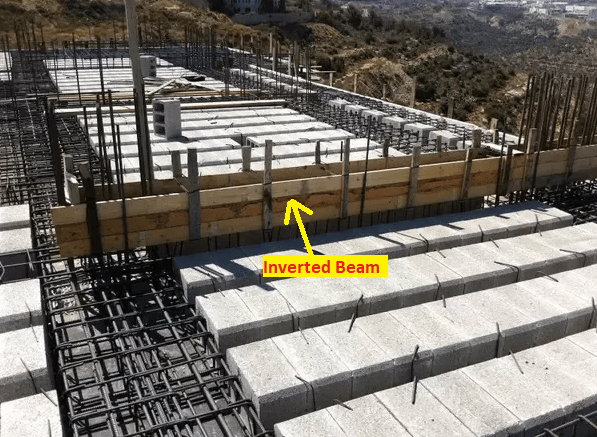 The inverted beam is desired structural element because of several advantages which include:

By providing inverted beam floor height can be achieved, clears the way for electromechanical duct-work, and also the aesthetic appearance of the building.

This is more applicable to industrial, commercial buildings.

Inverted T–Beams are prestressed concrete elements that have a constant cross section. They are manufactured using high tensile strength prestressed wires or single wire which are embedded within the element. Prestressed beams have many uses in floor construction.