Also, read: What is Consistency of Cement

What Is Linear Measurement Surveying?

Surveyors are concerned with the measurement of vertical and horizontal distances and angles and, even more recently, with direct positioning.

These, then, are used in a variety of combinations in traversing, triangulation, trilateration, mixed-mode operations, mapping, layout staking, leveling, etc.

In the case direct measurements, distances are measured on the ground with the help of a chain or tape or any other instrument.

In the optical methods, observations are taken through a telescope, and calculations are done for the distances, such as in tachometer or triangulation. In the electro-magnetic methods, distances are measured with instruments that rely on propagation, reflection, and subsequent reception of either radio waves. Light waves or infrared waves.

Also, read: Difference Between One Way Slab and Two Way Slab | What is Slab

Measuring the distance directly as below

Measurements of distances by pacing are chiefly confined to the preliminary surveys and explorations where a surveyor is called upon to do a rough survey as quickly as possible.

It may also be used to roughly check the distances measured by other means. The method consists of counting the number of paces between the two points of a line.

One can soon learn to pace distances along with level, unobstructed ground with a degree of accuracy equivalent approximately to 1 in 100. However, pacing over rough ground or on slopes may be difficult. Passometer is an instrument shaped like a watch that is carried either in the pocket or is attached to one leg.

When the person wearing the Passometer walks, it counts the number of paces the person has moved.

Then by multiplying the number of paces with the average pace length, the distance between the two end stations can be determined. A pedometer is a device similar to the passometer except that, adjusted to the length of the pace of the person carrying it. It registers the total distance covered by any number of paces.

Also, read: What Is Traversing in Surveying | Types | Method | Definition

1.4. Measurement by Odometer and Speedometer

The odometer is an instrument for registering the number of revolutions of a wheel. The well-known speedometer works on this principle.

The odometer is fitted to a wheel that is rolled along the line whose length is required. The number of revolutions registered by the odometer can then be multiplied by the circumference of the wheel to get the distance.

Since the instrument registers the length of the surface actually passed over, its readings obtained on the undulating ground are inaccurate. If the route is smooth, the speedometer of an automobile can be used to measure the distance approximately.

Chaining is a term that is used to denote measuring distance either with the help of a chain or a tape and is the most accurate method of making direct measurements.

For work of ordinary precision, a chain can be used, but for higher precision, a tape or special bar can be used. The distances determined by chaining form the basis of all surveying.

No matter how accurately angles may be measured, the survey can be no more precise than the chaining.

In this method, observations are taken through a telescope, and calculations are done for distances such as in tachometer (stadia) or in triangulation.

Tachometer (stadia is the common term in the USA ) is a surveying method utilized to quickly determine the horizontal distance to, and elevation of, a point.

The apparent intercepted length between the bottom and top wires is read onto a graduated rod held vertically in the desired stage.

The space from the telescope to a rod is seen by proportional relationships in similar triangles. Accuracy of 1/500 of this distance is achieved with reasonable care

3. Instruments used in the tachometer

For short distances, ordinary leveling staves are used. The leveling staff is normally 4 m long and can be folded into three parts.

The graduations are so marked a minimum reading of 0.005 or 0.001 m, could be taken. For long sights, as specially designed graduated rod is utilized, which is called a stadia rod.

It’s also 4 m long, and could possibly be telescopic or brushed. The graduations are comparatively clear and daring, and the minimum reading Which Can Be taken is 0.001 m.

In the case of electronic methods, the distances are measured with instruments that are based on propagation, reflection, and subsequent reception of either radio or light waves.

The instruments used under the electronic methods are Geodimeter, Tellurometer, and Decca Navigator, etc.

The main instrument for surveyors on site today is the ‘total station.’ It is an instrument that combines the angle measurements that could be obtained with a traditional theodolite with electronic distance measurements.

Taping distance, with its associated problems, has been rendered obsolete for all base-line measurement.

The distance can now be measured easily, quickly, and with great accuracy, regardless of terrain conditions. 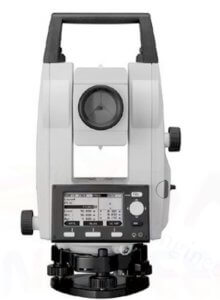 A typical measurement of distance takes between 1.5 and 3 s. Automatic repeated measurements may be utilized to improve reliability in tough atmospheric conditions.

Tracking modes, for the setting from distance, repeat the measurement several times a second. Total stations with their inbuilt EDM enable: