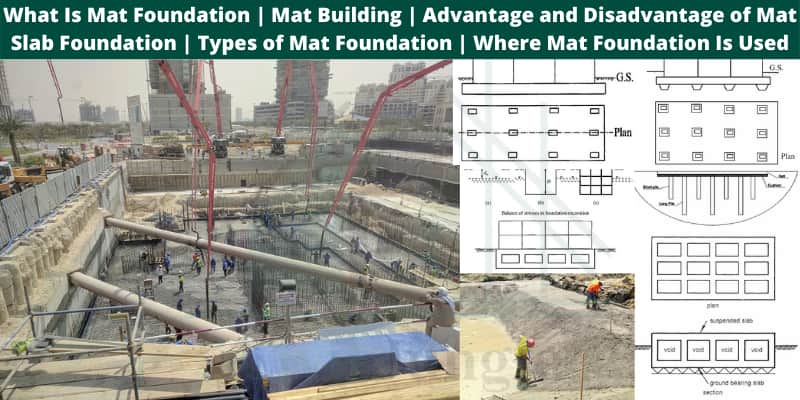 What Is Mat Foundation? 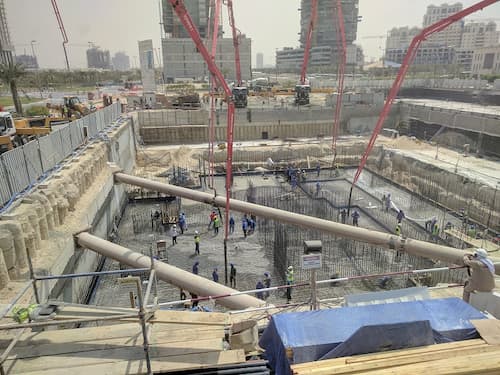 Mat foundation is also called a raft foundation. Generally, it is a continuous slab laying on the soil on which all the columns and beam of the structure are constructed.

It is distributed all the load simultaneously to the soil that’s coming from the superstructure. For this, the particular zone of the soil area under the mat foundation is not collapsing.

Because the stress under the soil area for all zone is equal. For the basement, a mat foundation is very good. Where one column is overlapping another column there we used a mat foundation. 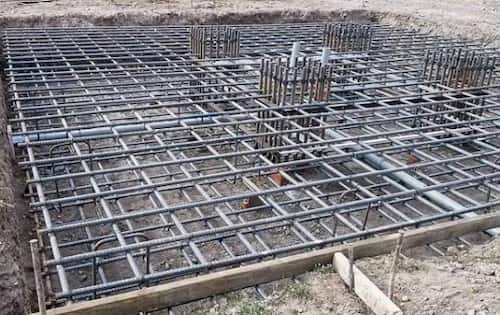 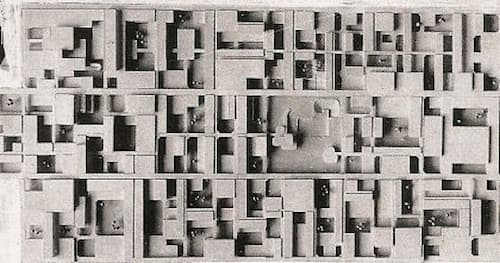 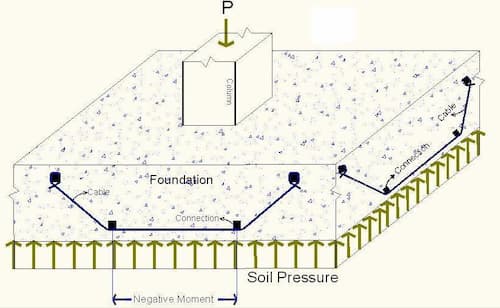 It has some disadvantages are as follows.

There have two types of mat foundation design one is a conventional design that uses charts and manual calculation and another is a finite element analysis method that design solved by a computer program.

The total applied load is calculated into the conventional design method. The shear force and bending moment are determined. The reinforcement area per unit width is calculated.

The eccentricity of loading for the calculated pressure under each column. To determine the effect depth of the footing.

#2. Finite Analysis of the Method:

In the structural analysis, the finite analysis method is a consideration. Into the analysis and design, the soil is model and its behaviour is incorporated.

There are six types of mat foundation that are- 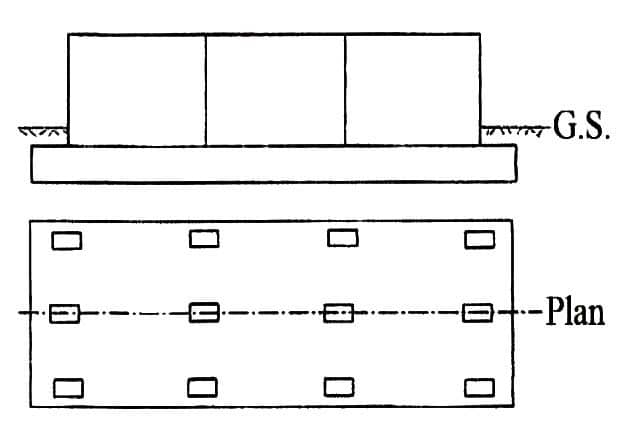 A flat plate mat is used where the structure is lightweight and small. When the soil is not compressible where this type is suitable.

In the form of the cage, the reinforcement bar is provided on both the top and bottom sides. At least 6 inches of RCC thick slab is provided in this type of foundation. 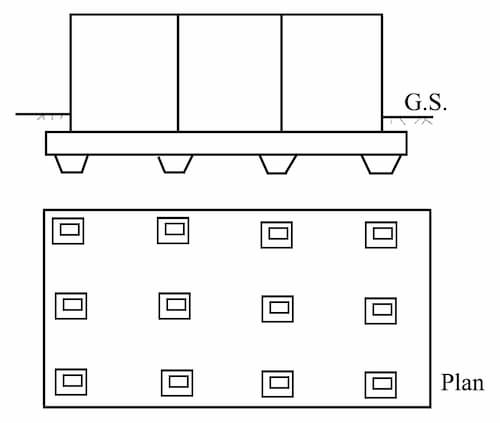 When the upcoming column load is very heavy the slab thickness should be increased. Where the flat plate mat foundation is not enough to carry the heavy load that comes from the superstructure then the thickened plate foundation is connected.

The heavy load creates a negative bending moment on the column and diagonal shear in the slab. So the thickness of the RCC slab under the column should be thickened. 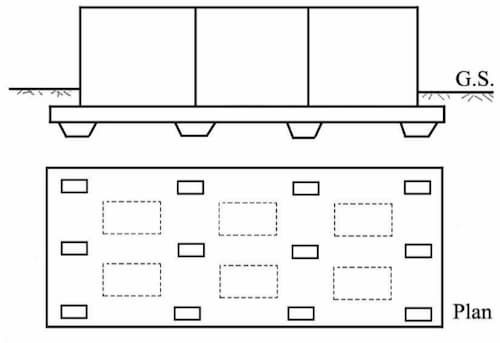 And the intersection of the beam all columns are placed. This type of foundation suitable when the column is carrying an unequal load and between the column, the spacing is more. 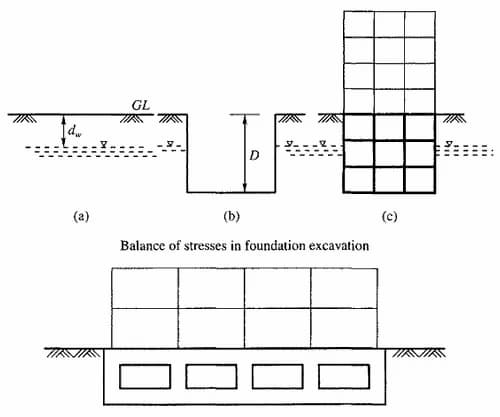 When the column has a heavy load then the mat foundation is used. In this type of foundation design, the basement RCC wall acts as a deep beam.

When the foundation depth is required more than 90 cm then the rigid frame mat foundation is used.

This type of foundation constructs in the soil by piles. Where the water table is near the ground level and the soil compressibility is high the piled mat foundation is suitable for those places. 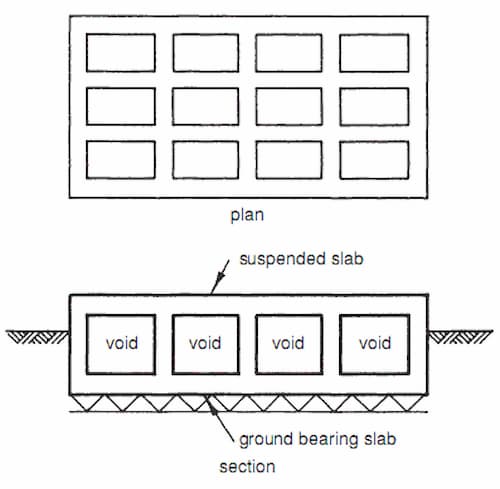 The walls are both sides top and bottom are connected by the slabs. At loose soil this type of foundation is suitable. 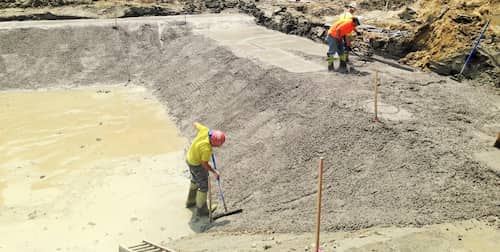 The mat construction process is very important in which extra care should be needed.

The few processes of mat foundation are described below: 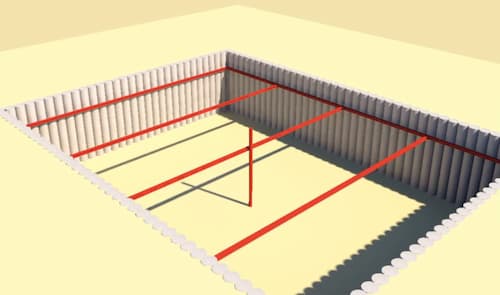 All the mat foundation are generally waterproofed. When it is construed at the ground level waterproof, the membrane is added. That makes it waterproofed. For this, the foundation is always protected from wetness or dampness. 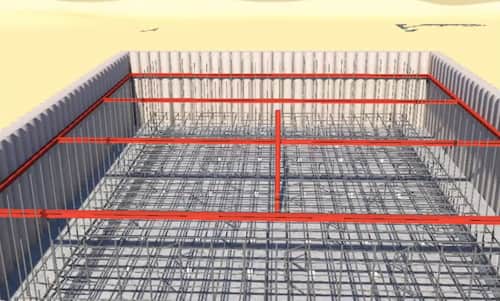 Where Mat Foundation Is Used?

The uses of mat foundation –

What Is Mat Foundation?

A mat foundation, sometimes called a raft foundation, looks like it sounds. It is a “mat” of concrete that sits on or just below the ground; in other words, a shallow foundation. You may have heard it referred to as a slab foundation, a common choice for steel buildings.

A raft or mat foundation is a large continuous rectangular or circular concrete slab that carries the entire load of the superstructure and spreads it over the whole area beneath the building. It is considered as one type of shallow foundation and is useful in controlling the differential settlement.

Mat–slab foundations distribute heavy column and wall loads across the entire building area, to lower the contact pressure compared to conventional spread footings. Mat–slab foundations can be constructed near the ground surface, or at the bottom of basements.

A raft foundation, also called a mat foundation, is essentially a continuous slab resting on the soil that extends over the entire footprint of the building, thereby supporting the building and transferring its weight to the ground. This reduces the stress on the soil.

A mat building is a building that has access, layout, daylighting and ventilation solved for a plan unit that’s repeated as often as needed. Variations are allowed. A quick search on the term usually returns the same examples. The Free University of Berlin, Candilis, Josic, Woods and Scheidhelm, 1963.

Mat footing is the foundation made of concrete that is laid on the ground surface to provide the stability to structure, when the large number of floors exist in the structure supported by it.

Where Mat Foundation Is Used?

Mat foundations are popular in areas where basements are common. Mat foundations are cost effective choices for individual column footing areas totaling an area covering more than half the total footprint of the completed building.