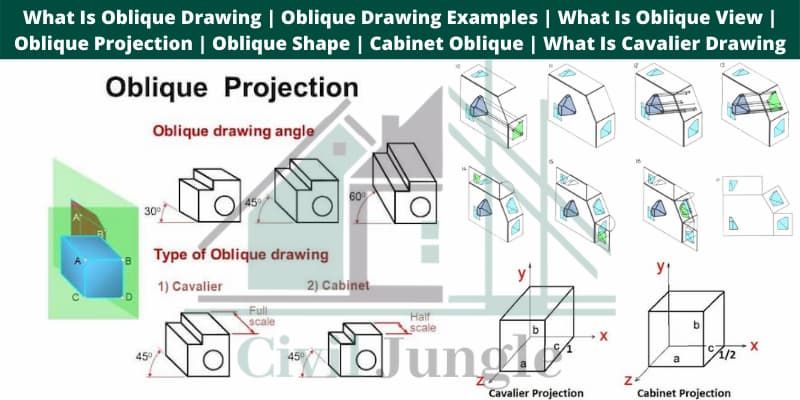 What Is Oblique Drawing?

Oblique Drawing is a type of projective drawing in which the frontal lines are given in true proportions and relations and all others at suitable angles other than 90 degree without thinking about the rules of linear perspective.

Oblique Drawing is a pictorial representation of an object, in which the diagram is intended to depict the perspective of objects in three dimensions.

Oblique Drawing can be done either in a normal, cabinet, or cavalier style. In marketing departments while doing their business process to illustrate the product and its features, Oblique Drawing is generally used by them.

Now a days in our daily lives, we come across different three-dimensional objects such as football, cricket bats, etc.

With the help of Oblique Drawing we can easily draw any three-dimensional object in a two-dimensional plane like paper.

A cube is a three-dimensional object but when we draw the image of the cube on paper, it gives us a clear picture as to how a cube looks like.

The paper is in a two-dimensional plane but a three-dimensional solid like cube can be drawn on it. This way of drawing is known as Oblique Drawing. 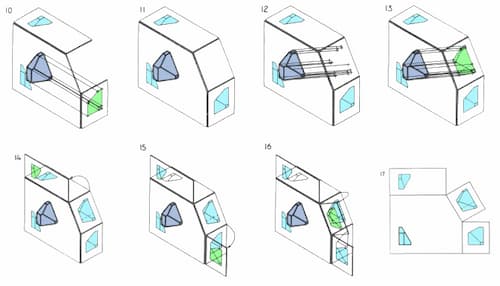 Step 3. Then draw the back face of the cube measuring 4 x 4 a little further from the first cube, which will offset with respect to the front face.

Step 4. Then join the corresponding corners of the front face and back face of the cube.

Step 6. While drawing the whole process we must keep in mind that the size of the front and back end of the oblique drawing are the same and all the edges of a cube are equal in reality but the measurement is different in the drawing.

What Is Oblique View?

An oblique view is a pictorial view of an object that shows its elevation, plan, or a section which can be used to scale with parallel lines projected from the corners, that is at 45 degrees or any other angle, which indicates the other sides. 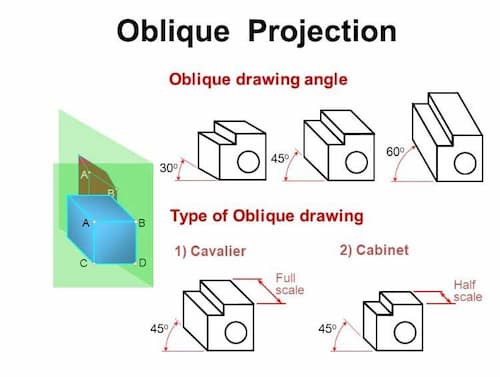 From the first or second century to 18th-century Oblique Projection was used almost universally by Chinese artists for depicting rectilinear objects such as houses.

Also, Read: Difference Between Sketching and Drawing | What Are Conceptual Sketches | Architecture Concept Drawing | Types of Drawings for Building Design 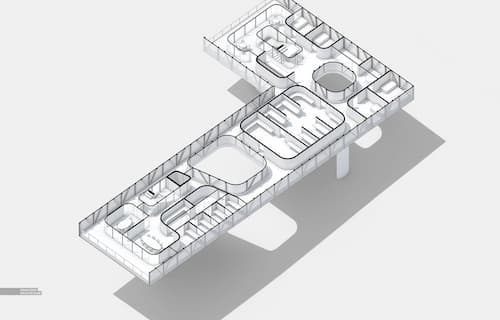 When an object in geometry is distorted so that it seems to lean over at an angle or as opposed to being exactly upright is said to have an oblique shape.

Oblique Shape is referred to a shape, either plane or space, that has either an acute angle or an obtuse angle.

In an Oblique Shape the side that forms the angles are never perpendicular, if told in simple terms these sides will never meet. 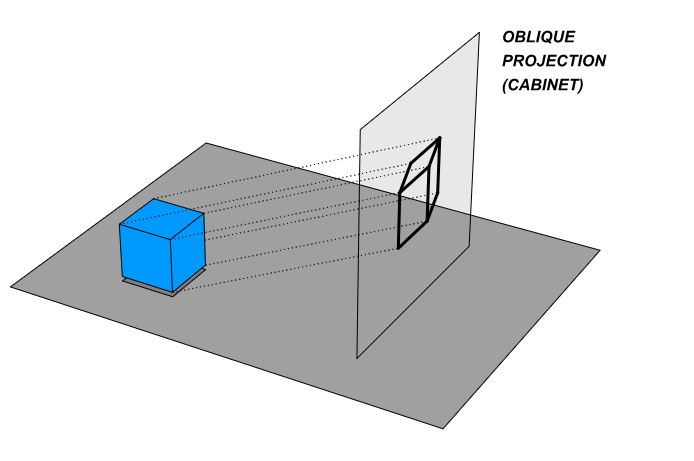 What Is Cavalier Drawing?

In cavalier drawing all lines including receding lines and the three-axis lines are made to their true length which means that if an object is shown is 4 cm deep then while drawing that object with a cavalier method we have to draw the object 4 cm deep.

When we are using Cavalier Projection for flat drawing, the two main axes ‘x‘ and ‘z’ on the figures that we draw are perpendicular to each other and the length on this two-axis are drawn in a 1:1 scale.

This step is quite similar to the diametric projections, although it is not similar to axonometric projection, as the third axis, that is ‘y’ axis is drawn in diagonal making an arbitrary angle of 30 degree or 45 degree with the ‘x’ axis.

The drawn length of the third axis, which is ‘y’ axis, is not scaled.

When a figure must be drawn by hand like with pen and paper or on a blackboard, Cavalier Projection is used as it is very easy to draw and the drawing is very similar to the actual image.

Cavalier View or cavalier perspective is the way we see an object when that object is seen from a high point.

A projective drawing of which the frontal lines are given in true proportions and relations and all others at suitable angles other than 90 degrees without regard to the rules of linear perspective.

One way to draw using an oblique view is to draw the side of the object you are looking at in two dimensions, i.e. flat, and then draw the other sides at an angle of 45°, but instead of drawing the sides full size they are only drawn with half the depth creating ‘forced depth‘-adding an element of realism to the object.

Oblique projection is a type of parallel projection: it projects an image by intersecting parallel rays (projectors) from the three-dimensional source object with the drawing surface (projection plan).

In geometry, an oblique object is one that is distorted so that is seems to ‘lean over’ at an angle, as opposed to being exactly upright. One that is not oblique and is upright is called a ‘right’ object.

An oblique projection in mechanical drawing in which dimensions parallel to the third axis of the object are shortened one half to overcome apparent distortion.

Cavalier Oblique: The cavalier perspective, also called cavalier projection or high view point, is a way to represent a three-dimensional object on a flat drawing, and more specifically, a type of oblique projection.