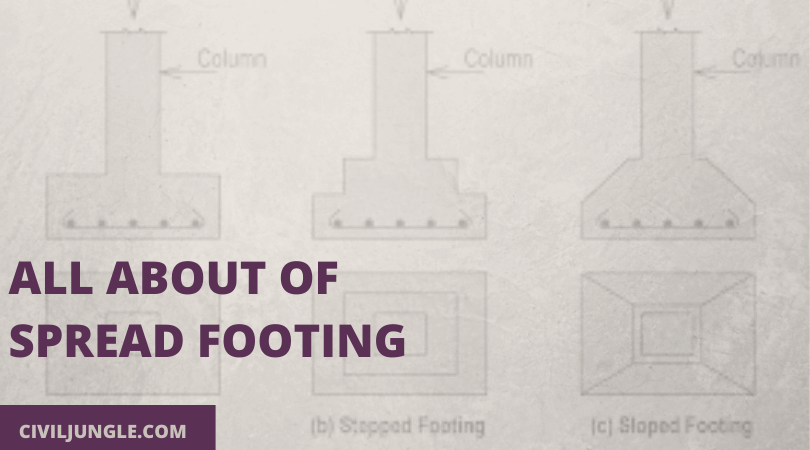 What Is Spread Footing? 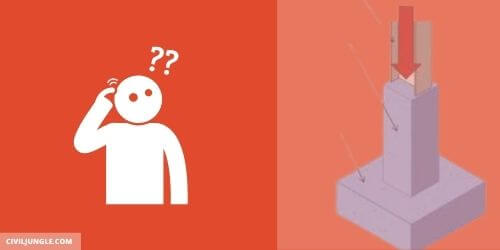 The spread footing is utilized to support the column & walls and additionally to convey & disseminate the load coming to the structure to the soil below it.

With loads provided within the upward direction, this footing actually acts like an inverted cantilever, and this sort of footing is typically a rigid element & they’re orthogonal just in case of symmetric footing.

This type of footing may be a circular, square, or rectangular slab of uniform thickness and to spread the load over a sizeable area sometimes it’s stepped.

The base of spread footing is slightly wider than load-bearing foundation base. This is also called a stepped spread foundation.

During this sort of footing, a base foundation is made which is an RCC member. This wider bottom disseminates the burden over a good area, adding stability to the building.

The spread footings are constructed with concrete & steel and, because of their design, they’re less likely to fail than other spot footers.

The Spread foundations are common to use within the building industry. The bottom of the structure enlarges or spread to produce individual support. 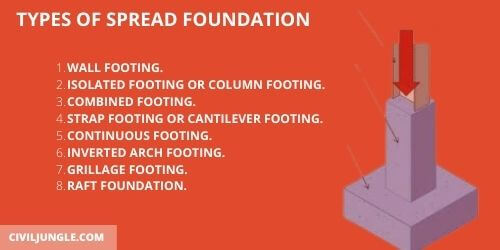 A wall footing or strip footing is a continuous strip of concrete that serves to spread the weight of a load-bearing wall across an area of soil. It is the component of a shallow foundation. Wall footings carrying direct vertical loads might be designed either in plain concrete or in reinforced concrete.

Wall footing are often either simple or steeped. Wall footing may be further categorized into two types:

Isolated footing is the single or individual footing which transfers load to the underground soil. It is provided when a single column is to be provided. A foundation is the part of the substructure which makes a direct contact or rested inside the ground.

This type of footing is employed for a single column. This isolated footing is further classified into 3 types:-

When individual footing has to accommodate two or in exceptional case more than Two columns is known as the combined footing or When two or three columns are located very near to each other, we provide a single substructure for them and the footing is known as a combined footing.

When two or more columns are available in a row then this kind of footing is made. In this, there are two kinds of footing:-

A strap footing is a component of a building’s foundation. It is a type of combined footing, consisting of two or more column footings connected by a concrete beam. This type of beam is called a strap beam

A continuous footing is the one which supports more than two columns. The footing is analogous to the strip footing for wall. The loads from the individual columns are transferred either directly to the footing slab, or through a longitudinal beam running longitudinally when the loads are heavy.

This sort of foundation is suitable within the earthquake area and also prevents differential settlement.

This sort of foundation employed in places where the bearing capacity of the soil is extremely poor and also the load of the structure is concentrated over the walls & deep excavations aren’t possible.

A foundation consisting of one, two or more layers of beams (typically steel) superimposed on a concrete layer to disperse the load over a large area is a foundation for grilling. This type of foundation is generally used for pillars and column scaffolds with a heavy structure.

A grillage footing utilizes to transmit ponderous loads from the steel column to the soils having low bearing power.

A raft foundation, also called a mat foundation, is essentially a continuous slab resting on the soil that extends over the entire footprint of the building, thereby supporting the building and transferring its weight to the ground.

Raft foundation is actually a merged footing that covers the whole area just underneath a structure & holds all the walls & columns.

In this foundation, an R.C.C. slab is provided with a beam or without the beam of suitable thickness.

The footing depth should be deep enough to resisting punching shear and direct shear transferred from column load. The reinforcement within the footing should be designed to resist bending moments.

The dowels at the column-footing interface should be sufficient to transfer column loads. To feature additional support, spread footings are developed with concrete & reinforced with steel. Since spread footing transfers the load of the building over a sizeable area, there is a little risk of failure compare to spot footers.

Where moment framed structure is employed, spot footings will be reinforced to resist moment forces generated by wind load or earthquake load.

Using the subsequent formula, the bottom area of the spread footing is calculated:- 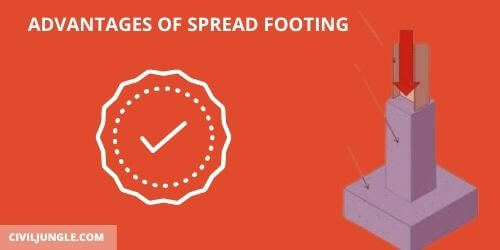 For providing the spread footing as a foundation within the building, there are the subsequent advantages such as:- 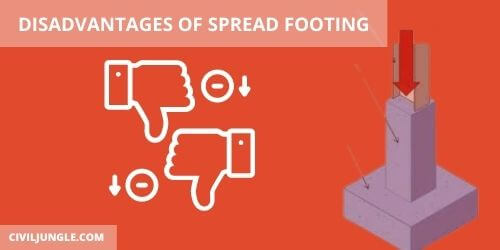 Shallow foundation is basically a form of building a foundation that conveys building loads to the earth very close to the surface, in lieu of a subsurface layer or a range of depths as in a deep foundation.

It may be used where the bearing capacity of soil on which the structure is required to be constructed is maximum. Minimum depth of this Foundation is 800 mm and a maximum depth is no greater than 4 meters.

A pier foundation is an assembly of sizeable diameter cylindrical columns to hold up the superstructure and convey sizeable super-imposed loads to the firm layer below. It stood several feet aloft the bottom. It is also referred to as “post foundation”.

Technology of Spread Footing with Pier

The most ordinary way is digging a square or rectangular borehole. Then formwork is made ready in the pit which settles the shape of the future foundation; then the reinforcement cage is settled, & concrete is slooshed. Then, the formwork is detached and canopied with a pillar.

Pier foundation is employed utilizing the below conditions:-

Pier foundations are generally built 1-1.5 feet aloft the bottom to resist the moisture because the moisture impair the wooden structures.

A spread footing foundation, which is common in residential buildings, has a wider bottom portion than the load-bearing foundation walls it supports. This wider part “spreads” the weight of the structure over more area for greater stability.

Spread footings are usually designed to use 3 ksi < f’c < 4 ksi, whereas modern structural members frequently use concrete between the range of 4 ksi < f’c < 8 ksi. A higher concrete strength helps reduction the member’s size. However, the footing’s design is govern by the bearing capacity and settlement.

What Is a Spread Footing?

A spread footing (or isolated or pad) footing is provided to support an individual column. A spread footing is circular, square or rectangular slab of uniform thickness. A mat or raft foundation is a large slab supporting a number of columns and walls under the entire structure or a large part of the structure.

Spread footings are types of shallow foundation which transmit and distribute the point load from the structure (column, support) to the soil. The spread footings have been performed as masonry structures of complex rock blocks, bricks, and unreinforced concrete.