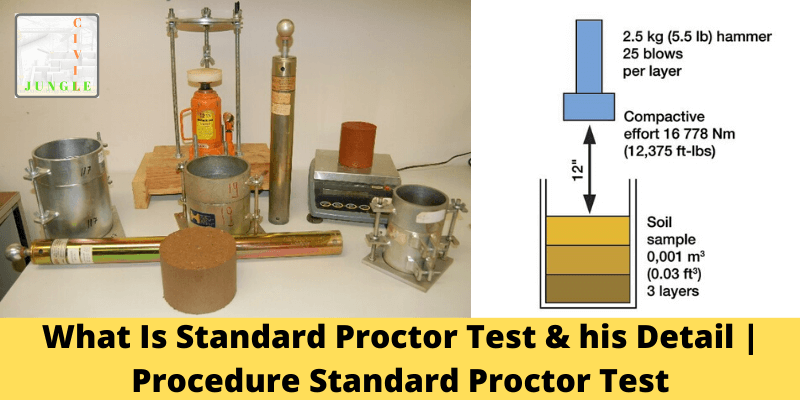 What Is Standard Proctor Test & his Detail?

Probably the single most important soil trait is its density or compaction. Soil is made up of many particles of different sizes.

The closer together these particles are, the more stable the soil. After the engineers have classified the type of soil and the load-bearing needs of specific areas within a project, they can calculate the required density of the soil for each area.

The required density is the degree to which a soil needs to be tamped down to make it as solid as it was in its original state.

This requirement is usually expressed as a percentage, with 100 percent representing the maximum possible compaction.

The compaction test, called the Standard Proctor Test, determines how much soil can be compacted. That figure will be used as a guideline throughout the project. The in-place material must be compacted to a certain percent of the “Proctor”.

Testers fill a cylindrical steel mold, 6 inches in diameter and 7 inches deep, with the material in three separate layers, or lifts.

Each lift is compacted by 25 blows from a 5.5 pound, 2-inch-diameter hammer falling from a distance of 12 inches.

The Standard Proctor Test was developed by R.R. Proctor (1933) for the construction of earth-fill dams in the state of California.

The test equipment consists of

The test consists of compacting soil at various water contents in the mould, in three equal layers, each layer being given 25 blows of the 5.5 lb rammer dropped from a height of 12 in.

The dry density obtained in each test is determined by knowing the mass of the compacted soil and its water content.

The rammer has a mass of 2.6 kg with a drop of 310 mm. The below figure shows the dimensions of the IS version of the Proctor test mould and the rammer. 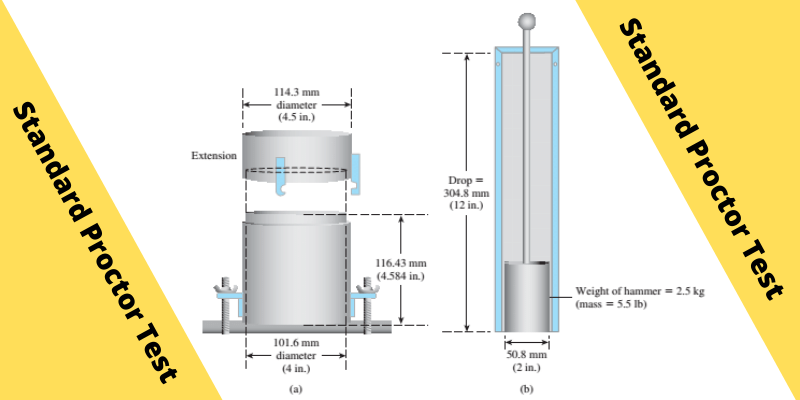 About 3 kg of air-dried and pulverized soil, passing a 4.75 mm sieve, is mixed thoroughly with a small quantity of water.

The mixture is covered with a wet cloth and left for a maturing time of about 5 to 30 minutes (or more for clay soils) to permit the proper absorption of water.

The quantity of water to be added for the first test depends upon the probable optimum water content for the soil.

The initial water content may be taken 4 % for coarse-grained soils and 10% for fine-grained soils. The empty mould attached to the base plate is weighed without a collar.

The collar is then attached to the mould. The mixed and mature soil is placed in the mould and compacted by giving 25 blows of the rammer uniformly distributed over the surface, such that the compacted height of soil is about 1/3 the height of the mould.

Before putting the second installment of soil, the top of the first compacted layer is scratched with the help of any sharp edge.

The second and third layers are similarly compacted, each layer being given 25 blows. The last compacted layer should project not more than 6 mm into the collar.

The collar is removed and the excess soil is trimmed off to make it level with the top of mould. The weight of the mould, base plate, and the compacted soil is taken.

A representative sample is taken from the center of the compacted specimen and kept for water content determination.

The hulk density ρ and the corresponding dry density ρd for the compacted soil are calculated from the following relation:

The compacted soil is taken out of the mould, broken with hand, and remixed with raised water content (by 2 or 4 percent).

After allowing for the maturing time, the soil is compacted in the mould in three equal layers, as described above, and the corresponding dry density ρd and water con-tent w are thus determined.

The test is repeated on soil samples with increasing water contents, and the corresponding dry density ρd obtained is thus determined.

A companion curve is plotted between the water contents as abscissae and the cor-responding dry densities as ordinates (Show below fig). 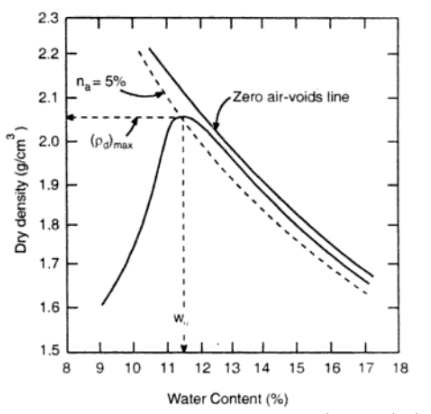 The theoretical maximum compaction for any given water content corresponds to zero air voids condition (na = 0).

The line showing the dry density as a function of water content for soil counting no air voids is called the zero air voids line or the saturation line and is established by the equation :

Alternatively, a line showing the relation between water content and dry density for a constant degree of saturation S is established from Equation:

The Proctor compaction test consists of compacting soil samples at a given water content in a standard mould with standard compaction energy. The standard Proctor test uses a 4-inch-diameter mould with the compaction of three separate layers of soil using 25 blows by a 5.5 lb hammer falling 12 inches.

Why Standard Proctor Test Is Done?

Standard Proctor Test is carried out to study or understand the soil’s compaction characteristics with variable moisture content. The test is performed to estimate the maximum load the soil could bear hence ultimately reducing the voids present in the soil.

What Is the Difference Between Standard and Modified Proctor Tests?