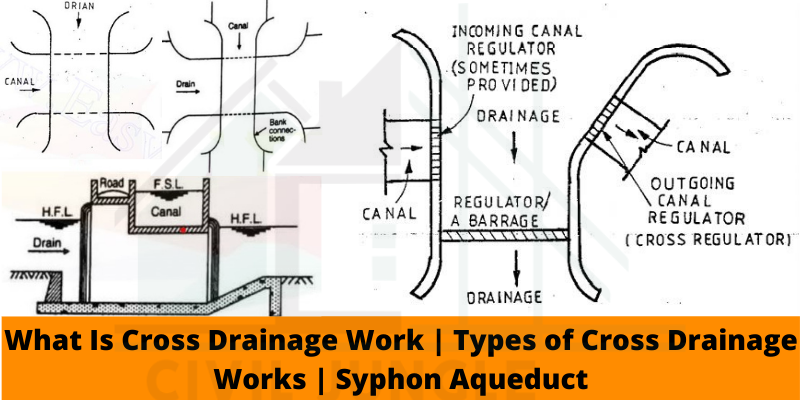 What Is Cross Drainage Work?

A cross drainage work is a structure carrying the discharge of a natural stream across a canal intercepting the stream.

Once the canal is taken to the watershed, no cross-drainage works are normally necessary except when the canal leaves the watershed for some distance forming a loop.

However, when the canal is aligned as a contour canal, a number of crass-drainage works are necessary.

Depending upon the relative levels and discharges, cross-drainage works may be of the following types:

1. C.D. Works Carrying the Canal Over the Drainage

3. C.D. Works Admitting the Drainage Water into the Canal

C.D. Works Carrying the Canal Over the Drainage 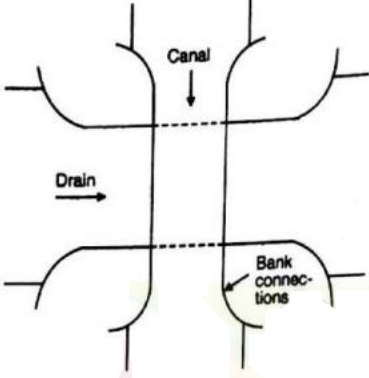 In this type of C.D.work, the canal is carried over the natural drain (See above Figure).

The advantage of such an arrangement is that the canal, running perennially, is above the ground and is open to inspection.

Also, the damage done by floods is rare. However, sometimes during heavy floods, the foundation can be scoured, or the waterway of the drain may be chocked with trees, etc.

This is the usual type of wort constructed when the drain is very big in comparison to the section of the canal.

Types of C.D. Works Carrying the Canal Over the Drainage 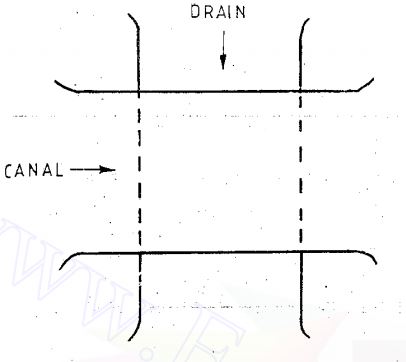 In these works, the canal is taken over the natural drain, such that the drainage water runs below the canal (see above Fig.) either freely or under syphoning pressure. 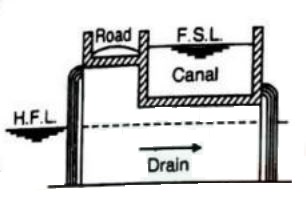 When the HFL of the drain is sufficiently below the bottom of the canal, so that the drainage water flows freely under gravity, the structure is known as an Aqueduct (See above Fig.)

However, if the HFL of the drain is higher than the canal bed and the water passes through the aqueduct barrels under syphonic action, the structure is known as Syphon Aqueduct (See above Fig.).

In this type of works, the canal water is taken across the drainage in a trough supported on piers.

An inspection road is generally provided along with the trough, as shown. An aqueduct is just like a bridge except that instead of carrying a road or a railway, it carries a canal on its top.

An aqueduct is provided when a sufficient level difference is available between the canal and the natural drainage, and canal bed level is sufficiently higher than the torrent level.

In Sirsa, a city near Roper in Punjab, an excellent aqueduct having 20 spans of about 13 m each has been constructed to carry a canal having a bed width of 28 meters and discharge of about 360 cumecs, with a torrent discharge of about 4300 cumecs.

A difference of 3.3 meters was available between the bed level of the canal and that of a torrent in this case.

In the case of a syphon aqueduct, the drain bed is generally depressed and provided with the pucca floor, as shown in the above fig.

On the upstream side, the drainage bed may be joined to the pucca floor either by a vertical drop (when a drop is of the order of 1 m) or by a glacis of 3: 1 (when a drop is more).

The downstream rising slope should not be steeper than 5: 1.

In this type of cross-drainage works (i.e., when the canal is taken over the drainage), the canal remains open to inspection throughout, and the damage caused by floods is rare.

However, during heavy floods, the foundations of the work may be susceptible to scour; or the waterway of the drain may get choked with debris, trees, etc. 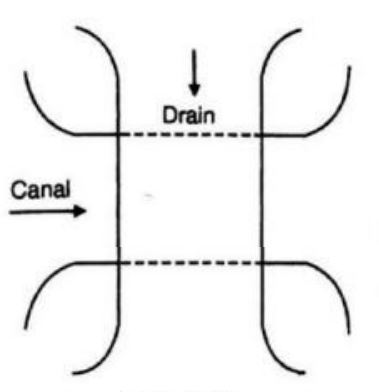 In this type of C.D. work, drainage is carried over the canal (See above Figure).

The advantage of this type is that the C.D. works themselves are less liable to damage than the earth-work of the canal.

The major disadvantage of this work is that the perennial canal is not open to inspection. Also, if the silt is deposited in the barrels of the work, it is difficult to clear it out.

The structures that fall under this type are

Types of C.D. Works Carrying Drainage Over the Canal 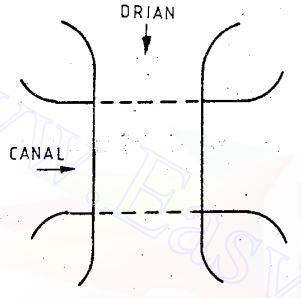 In the case of works, the drain is taken over the canal such that the canal water runs below the drain (See above Figure) either freely or under syphoning pressure. 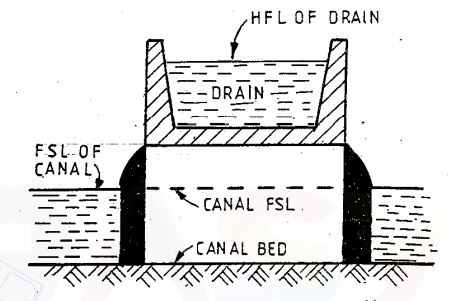 When the FSL of the canal is sufficiently below the bottom of the drain trough so that the canal water flows freely under gravity, the structure is known as a super passage (See above Figure Super Passage).

However,  if the FSL of the canal is sufficiently above the bed level of the drainage trough so that the canal flows under syphonic action under the trough, the structure is known as a canal syphon or a Syphon (See above Figure Canal Syphon).

However, in this type of cross-drainage works, the inspection road cannot be provided along the canal, and a separate bridge is required for the road-way.

For affecting the economy, the canal may be a flume, but the drainage trough is never a flume.

In the case of a syphon, the canal bed is depressed, and a ramp is provided at the exit so that the trouble of silting is minimized.

Also, read: Grades of Cement | Types of Cement Grades | Which Grade Cement Is Used for Slab

C.D. Works Admitting the Drainage Water into the Canal 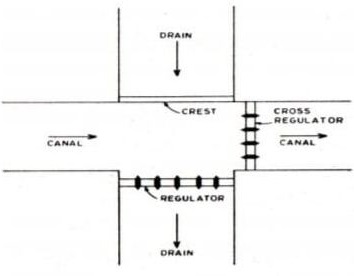 Such type of works have the following disadvantages :

Disadvantages of C.D. Works Admitting the Drainage Water into the Canal

(i) Regulation of such a work is difficult and requires additional staff.

(ii) The canal has to be designed to carry the increased flood discharge of the drain.

(iii) The faulty regulation of gates may damage the canal.

(iv) There is an additional expenditure of silt clearance.

The following are the structures under this type of C.D. works :

Types of C.D. Works Admitting the Drainage Water into the Canal 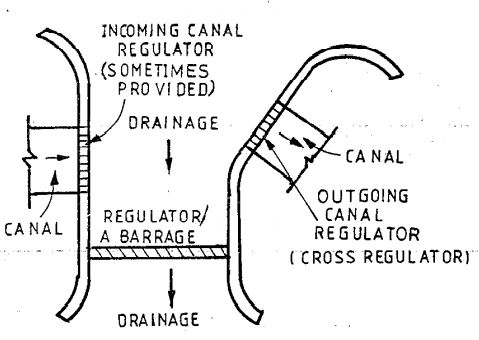 Typical Layout of a Level Crossing

In this type of cross-drainage work, the canal water and drain water are allowed to intermingle with each other.

A level crossing is generally provided when a large canal and huge drainage (such as a stream or a river) approach each other practically at the same level. A typical layout of a level crossing is shown above fig.

A regulator is provided across the torrent (drainage) just on the downstream side of the crossing so as to control the discharge passing into the torrent.

At the outgoing canal, a regulator is also provided so as to control the discharge into the canal. A regulator at the end of the incoming canal is also sometimes required.

The arrangement is practically the same as is provided on a canal headworks. This arrangement is generally provided when a huge sized canal crosses, a large torrent carrying a very high but short-lived flood discharge.

In this arrangement, the perennial drainage discharge is sometimes advantageously used, so as to augment the canal supplies.

During the dry season, when there are no floods, the torrent regulator is generally kept closed, and the outgoing canal regulator is kept fully open so that the canal flows without any interruption.

During floods, however, the torrent regulator is opened so as to pass the flood discharge.

A beautiful level crossing has been provided in Eastern U.P. under Sarda Sahayak Pariyojna, where a canal carrying 370 cumecs crosses the Sarda river carrying a high flood discharge of the order of 10,000 cumecs. 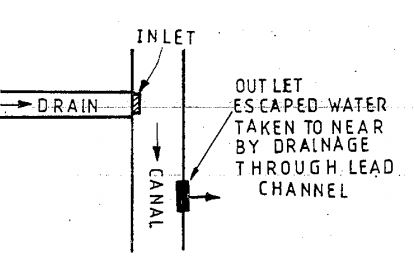 An inlet is a structure constructed in order to allow the drainage water to enter the canal and get mixed with the canal water and thus to help in augmenting canal supplies.

Such a structure is generally adopted when the drainage discharge is small, and the drain crosses the canal with its bed level equal to or slightly higher than the canal F.S.L.

Moreover, for the canal to remain in the regime, the drain water must not admit a heavy load of silt into the canal.

Thus, in an inlet, the drainage water is simply added to the canal.

But, when the drainage discharge is high or if the canal is small so that the canal section cannot take the entire drainage water, an outlet may sometimes be constructed to escape out the additional discharge at a suitable site, a little downstream along the canal.

It is not necessary that the escaped discharge should be equal to the admitted discharge.

This type of cross-drainage work (i.e., those requiring intermingle of canal water with drainage water) is inferior to aqueduct or super passage type of works, but they are cheaper.

Hence, the aqueduct or super passage type of works are generally used when high flood drainage discharge is large and continues for a sufficient time.

In a syphon aqueduct, canal water is carrier above the drainage but the high flood level (HFL) of drainage is above the canal trough.The drainage water flows under syphonic action and there is no presence of atmospheric pressure in the natural drain.