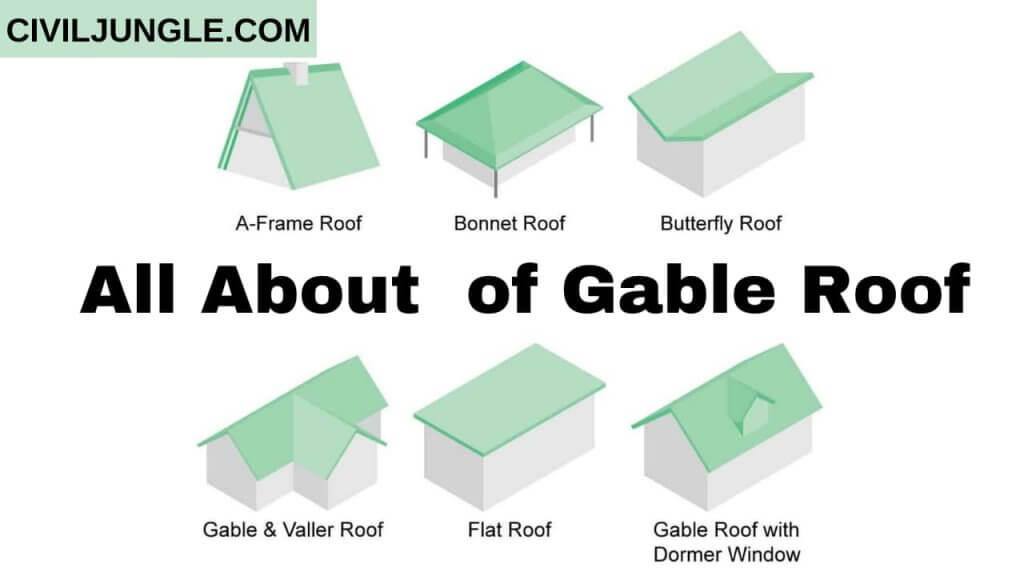 Here, the different types of gable roof are as follows 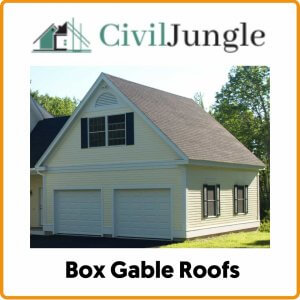 The roof section of a box gable roof is boxed at the end, with a triangular extension at either end of the house. This form is very similar to a regular gable roof, however the triangle element of the design is more distinct. 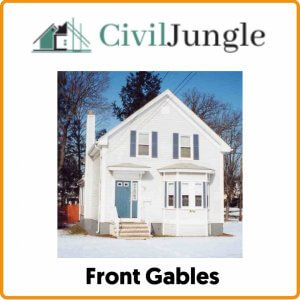 The entrance door is usually located under the gable of a front gable roof. This is a frequent element in Colonial-style homes, but it is growing in popularity as a design.

The cross gable roof is typically composed of two or even more gable rooflines which meet at an angle, usually with all the two ridges aligned perpendicularly.

Because a cross gable roof changes the form of the building’s structure, buildings with that kind of style frequently get a more complicated plan.

Homes with such a cross gable roof addition, for instance, could have distinct wings, a larger porch, or even a garage connected. 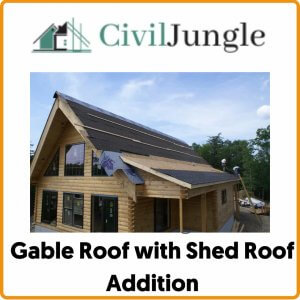 The addition of a shed roof to the gable roof ridge is a common modification for an extension to an existing roofing system.

This hybrid style is a popular choice for property owners wishing to expand because it allows for greater headroom and space without entirely changing the roof’s structure or looks. 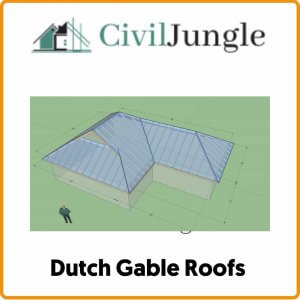 The Dutch gable roof is a cross between a gable and a hip roof. The gable is placed on the hip roof in most types of roofs, offering greater space within the loft.

Most building owners favour this style because it enhances the aesthetic appeal of a home while also giving the practical benefit of additional room.

What Is Gable Roof? 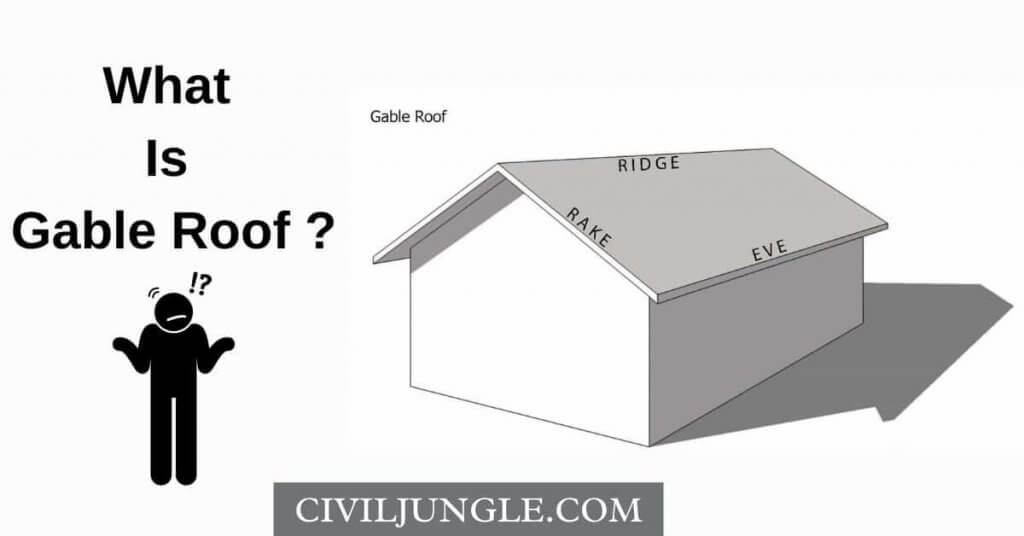 A gable roof is a typical roof style that can be found on a variety of structures. This will have 2 sloping sides which eventually forms a ridge, as well as the triangle shape generated on both side will be the easiest way to identify it.

Gable roofs are great for cold-weather places since they can readily drain water as well as snow, but they can be troublesome in high-wind places if indeed the frames were not properly supported.

Gable roofs are another good choice for individuals who want more headroom in their loft conversion and greater ventilation in the attic. It’s also known as the A-shaped part of the wall that connects the two intersecting sloping sides.

It’s worth noting that all these sides can vary in size depending on the property, and bigger residential structures may have two or more gables to offer structure and depth.

How to Build Roof? 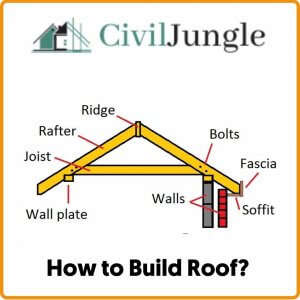 A gable roof is made up of two parts that slope in opposing directions from the roof ridge. These are arranged so that the highest, horizontal edges meet to form the roof ridge’s top point.

Depending on the size of the land, the pitch and height of the gutters may differ. A ridge board runs parallel to the exterior walls as well as extends all along roof’s maximum height or peak.

The tops of the typical rafters are tacked to the ridge board. Those rafters slope downwards and thus are nailed to the ceiling joists as well as the outer walls.

To extend the life of the gable roof until it needs replacing, it will require regular roof maintenance. A skilled roofer must evaluate your roof at least twice a year.

Gutters must be cleansed double the a year, irrespective of roof type, and broken gutters must be fixed or replaced. Clear any debris that has accumulated on your roof. If moss or mold is forming on your roof, this should be removed before your roof deteriorates and leaks.

Nevertheless, one ought not walk on a slanted roof even without appropriate safety devices, but it’s always preferable to contact a roofing professional.

Experts get the knowledge and experience to examine your roof and identify problems before they worsen, as well as determine whether this is time to repair your roof while your home sustains major structural damage.

A front-gabled building is one that has a gable that faces the street. A side-gabled structure, on the other hand, has its ridge parallel to the street and faces it with its cullis or gutter.

Front-gabled buildings were the norm in German city streets during the mediaeval gothic period. Side-gabled buildings became prominent throughout the Renaissance period, during the 14th and 17th centuries, and were influenced by Italian architecture.

Front-gabled houses became common in America between the early 1800s and 1920. Solar panels can also be installed more easily on gable roofs. Your solar panels will need to be put on brackets on a level roof or one with a very low slope so that they may be tilted for optimal sun exposure.

A roofer can install solar panels on a gable roof without using brackets if the pitch isn’t too steep (greater than 40°). 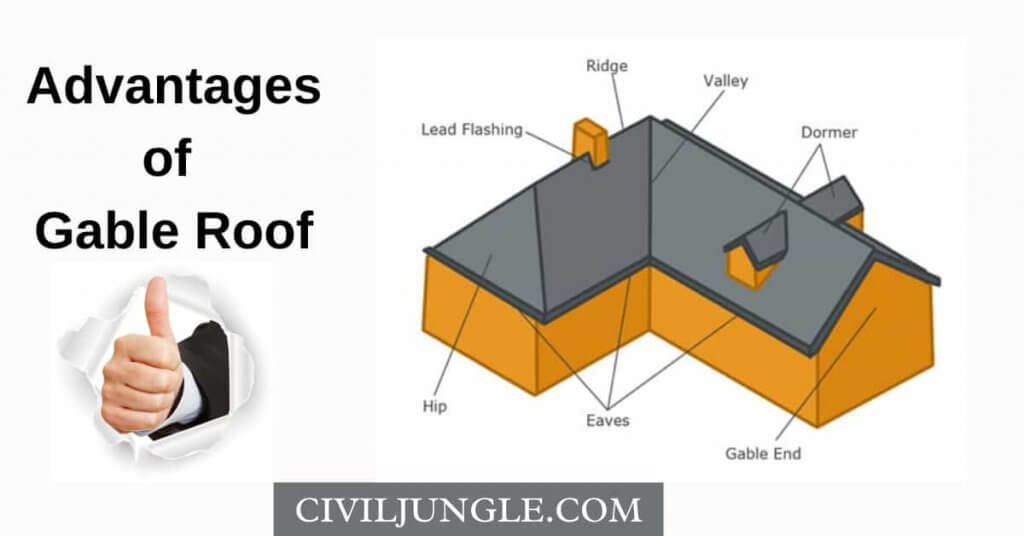 The shape and model of a gable roof are straightforward. As a result, this roof is simple to build and does not take a long time. This roof can also be customized to fit the style of your home. You can change the angle of the roof to suit your needs.

Aside from being simple to install, a gable roof also has a low cost of installation. The structure of this roofing material is quite simple, which makes it easy to install and reduces the costs associated with installing this roof.

Roofs that require a lightweight steel or wood frame are less expensive than other roof designs.

Inside the house, slanted roofs create extra outside air spaces. As a result, the house is difficult to heat and the owner is uncomfortable. Only the high roof surface will be exposed to the sun’s heat. The colder your home is, the higher the roof is.

4. Leaks Are Kept to a Minimum

A major benefit of a gable roof is that it is difficult to leak. This is because the roof is shaped like a triangle, allowing water to flow directly downwards. This reduces the amount of leakage caused by stagnant water.

5. Make Use of the Ceiling’s Unused Space

The next benefit we’ll cover is the utilization of unused space within the ceiling. Users of this roof, in general, have an empty area inside the ceiling that can be used for many reasons. For example, you may use the space for storage or, if it’s large enough, as an extra bedroom. 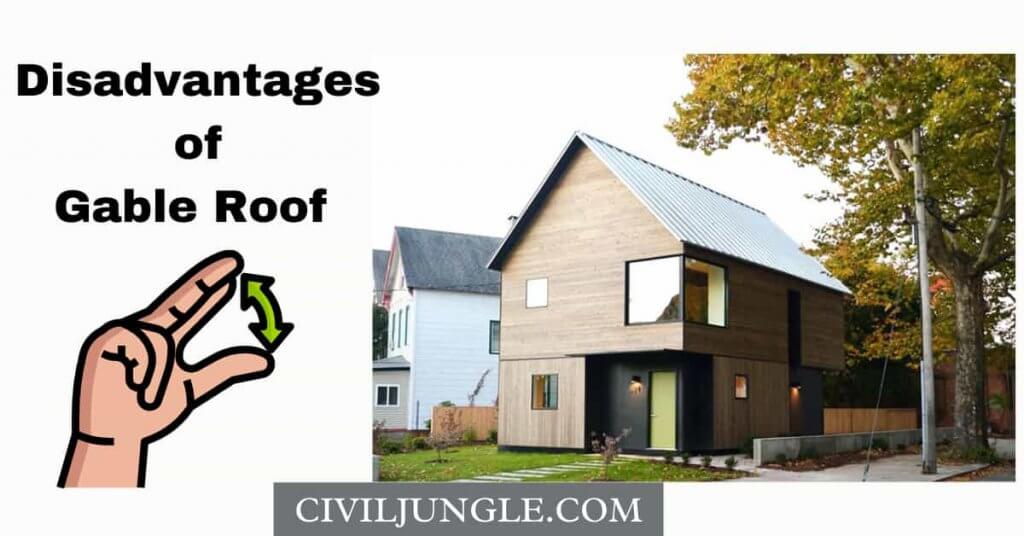 This roof is suited for use and will last for those of you who live in places with consistent weather. In contrast to your experience, if you live in an area with extreme weather, the roof construction is more likely to collapse if impacted by severe winds.

A gable roof is typically made out of a structure and tiles. It’s important to remember that the roof is always exposed to sunshine and rain.

As a result, the roof is prone to cracking over time and must be repaired. To make the roof more robust, use heat-resistant and waterproof coatings.

3. Water Loads Should Be Considered

Because of its sloping slope on two sides, the gable roof is difficult to leak. However, if the roof is installed too gently, it will be unable to survive the rain. The steeper the roof’s incline, the more vulnerable it is to collapse. To avoid this, make the roof slope at a steep angle.

To prevent the roof from collapsing, you must pay close attention to the roof’s installation. When putting up the roof, think about it carefully. For the roof angle, go with a 40-degree angle. This allows water to flow freely downward and prevents the tile from absorbing too much water. 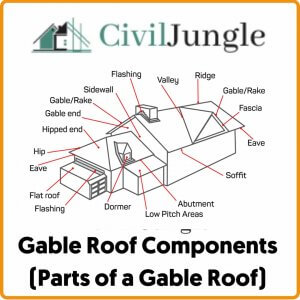 A gable roof is one that resembles the houses your children sketch. It features two sloping sides that meet at a point in the middle.

Also, read: What is CBR Test in Civil 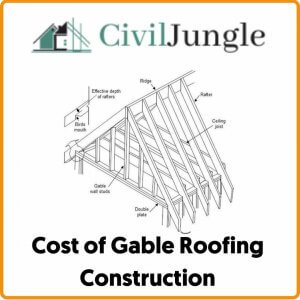 Gable roof shapes. Gabled roofs are the kind young children typically draw. They have two sloping sides that come together at a ridge, creating end walls with a triangular extension, called a gable, at the top.

Cut a support and line it up with the edge of the rafter. Use construction nails to secure it to the outside of the top plates. Place another vertical support 2 in (5.1 cm) apart from the first. Build supports on each gabled side of your roof.

With that done the next thing I’m gonna do is I’m going to use my jig saw to get it.

The main difference between a hip and gable roof are the slopes on its sides. On a hipped roof, all sides slope downward to the home’s walls. Gable roofs only have two triangle-shaped slopes that extend from the bottom of the roof’s eaves to the peak of its ridge.

Apply caulking one inch to the notch side of the gable. The caulking side of gable should under lap the second piece of gable as shown.

The gable barn is a classic design defined by a triangular end under a dual-pitched roof. Gable barns appeared during the nineteenth century; the style became popular because it could be easily expanded by adding to the gable end.

A roof composed of two parallel gables forming the shape of the letter m on the end wall.

How long does a gable roof last? Although there are a variety of factors that help determine how long the lifespan will be, one that’s properly installed can typically last about 40 years on average. They can sometimes last even longer if they have an adequate supporting framework.

Also known as rake trim, gable trim is a finishing piece of metal flashing used along the edges of a metal roof line where the edge of the metal roof panel meets the endwall panels.