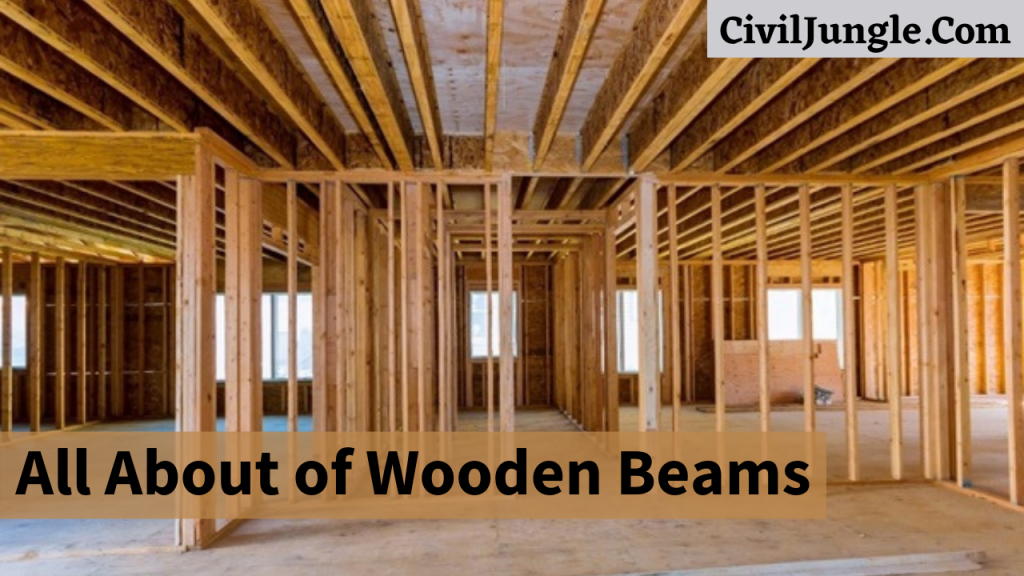 What is Wooden Beam?

A wood beam is structural support made from wood. They are most commonly used in wood frame structures like small houses, although they can be used in other types of construction as well. Beams are designed to resist bending when stressed by weight or forces like high winds.

Here, the types of wooden beams are as follows. 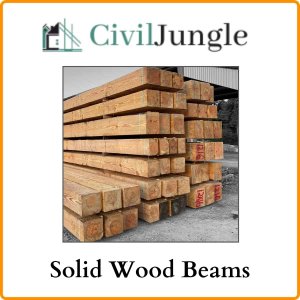 Solid wood beams are constructed from a single piece of wood. They are, as the name indicates, quite strong. They have been used for ages to construct many types of buildings and constructions.

These beams have an obvious appeal due to their rough look, but they may be rather costly. Their substantial weight might also make installation more difficult. 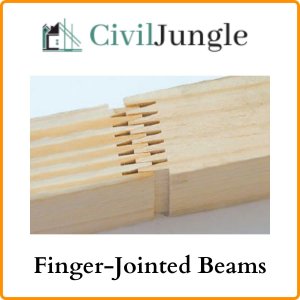 The finger-jointing technique is one method for making the most use of forest resources. It is a manufacturing technique that produces long beams by joining many short pieces of solid wood that have been purged of structural defects.

The wood pieces are constructed longitudinally and linked by finger joints to offer greater durability and mechanical strength.

Also Read:What Is Wood | 38 Types of Wood | Significance of Utilising Wood in Construction 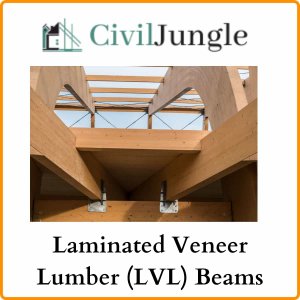 LVL is a composite made up of many layers of wood veneer and glue. LVL is not a new technology; the LVL process was used to make aero plane propellers during WWII. Since the 1970s, LVL has been utilized for beams and headers in building construction.

LVL referred to as Microlam, which is a proprietary term. LVL is also known as parallel-laminated veneer (PVL). Although the face-side look of LVL is similar to that of plywood, it is not plywood. The grain of each veneer layer in LVL is engineered to run in the same direction (long) for consistent edge-load strength (on-edge, like a beam) or face-load strength (flat, as a plank).

When compared to a material of the same diameter that is “cross laminated” (cross-banded), such as plywood, this “parallel lamination” gives more uniformity and predictability. LVL is a great alternative for long-span load-bearing applications up to 80 feet due to its parallel lamination.

LVL is built to withstand warping, shrinking, slitting, bending, twisting, and crowning, much like other structural composite timber products. In other words, LVL and its SCL cousins provide consistent dimensional stability.

Pound for pound, an LVL beam has a higher load-bearing capability than the best solid-sawn timber of the same dimension. 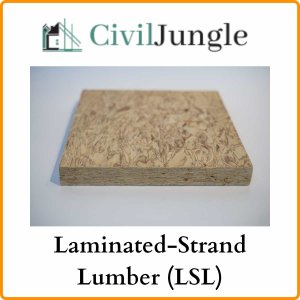 A laminated-strand timber beam is a factory-made, engineered composite beam. LSLs are commonly used as headers above windows and doors in wood frame walls. LSL is made from tiny strands (up to 12 inches long) of hardwood that would not typically be deemed appropriate for structural uses. LSL has a similar face-side look to aligned strand board (OSB).

As with other engineered composite wood products, LSL is an alternative to flitch beams and steel lintels. LSL is also used as rim boards, intermediate span beams and purlins. LSL offers the added benefit of good resistance to a lateral force such as the wind (winds up to 120 mph!). LSL can also be used as columns and wall studs. LSL wall studs can reach 30 feet. 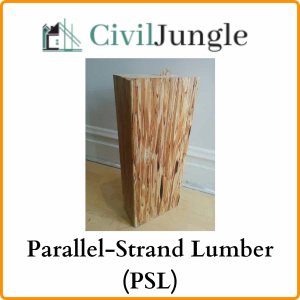 PSL, which is made from long, thin strands of wood fused together via a microwave technique, is dependably straight and robust, resisting shrinking, warping, and breaking. PSL’s strength is comparable to that of LVL. Natural wood growth flaws such as knots are removed throughout the PSL production process.

PSL beams are available in widths of up to seven inches and depths of up to 18 inches. According to the manufacturers, a PSL beam may reach over 70 feet. PSL beams may be built up on the construction site to enhance strength and stiffness without increasing depth 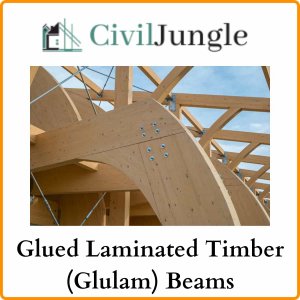 A typical Glulam girder is essentially a stack of bonded together two-by-four-inch dimensional lumber that is extremely strong, thus the full name: glue laminated lumber beam.

When nature and human engineering work together, tremendous strength and dependability are achieved. Pound for pound, a designed Glulam girder will always be stronger than nature’s most flawless, defect-free, sawn heavy timber.

A Glulam beam has the unusual property of being cambered; cambering is the upward pre-bending of a beam into a frown-shape so that the beam flattens when loaded rather than bending downward into a smile-shape when loaded. A Glulam hybrid with laminated veneer lumber (LVL) at the bottom of the beam is available for further tension resistance. 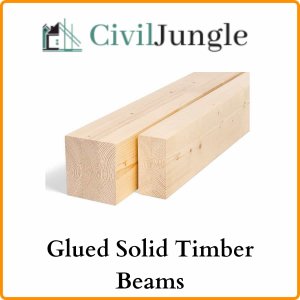 These beams outperform typical solid wood beams in terms of mechanical characteristics and durability. They are utilized in the construction of wood-frame homes and for exposed timber frames. 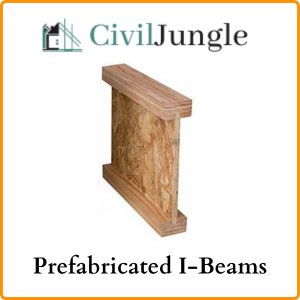 Prefabricated I-beams are load-bearing structural components that may be custom-built. The “I” design is made up of two horizontal components (the flanges) and a vertical segment (the web) between the flanges. The flanges are often constructed of laminated veneer or laminated wood, whereas the web is typically made of oriented strand board (OSB).

These prefabricated I-beams are useful because, due to their small weight, they can be readily handled on building sites, even when they are quite long, without the need for expensive handling equipment. The “I” design produces a high level of flexural strength and stiffness. 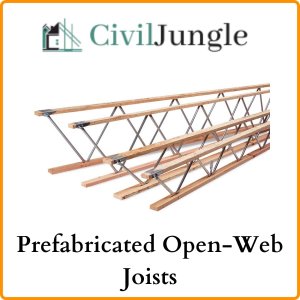 Furthermore, the framework allows for the installation of construction components like as plumbing lines and ventilation ducts. When used as floor joists, they are manufactured from sawn timber (23 or 24) laid flat, which offers structural sheathing support with a wide nailing surface. 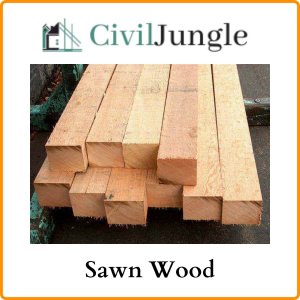 Sawn (or milled) wood beams come in a wide range of species and grades. There are two primary types of wood among these: hardwood and softwood. Hardwoods are generally utilized for furniture, wall paneling, and flooring.

Softwoods are employed for ordinary building construction. Natural sawn lumber’s quality varies from tree to tree and even inside each tree since it is “designed” by nature.

The softwood Douglas fir is the strongest of the tree species utilized for sawn lumber. Grain direction is the most important aspect in determining the structural use of sawn wood. Compressive and tensile loads should ideally be applied parallel to the grain. 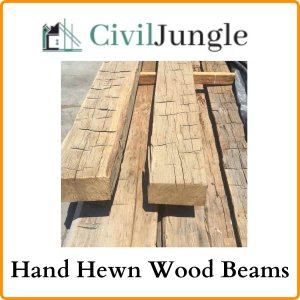 Hand Hewn Wood Beams are highly rustic, with obvious axe mark patterns. A broad axe, which has an angled blade on one side and a straight blade on the other, is commonly used on hand-hewn timbers.

These beams are frequently used to add character to an antique home, barn, or outdoor building. They are primarily utilized for nonstructural, ornamental reasons nowadays. Our experienced carpenters at Woodland Beam can recreate any appearance. 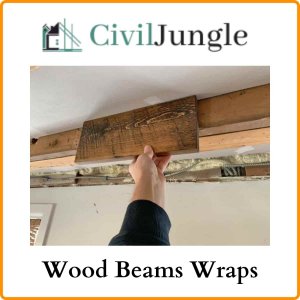 To give an unappealing wood beam a fresh appearance, wrap it within a box beam. Similarly, a Beam Wrap can be utilized to disguise an unsightly laminate or steel beam. Beam Wraps may be used to conceal virtually anything, including wiring, plumbing pipes (for more information on Whitton Plumbing), and duct work.

Because Wood Beam Wraps are indistinguishable from standard wood beams, they are essentially an appealing solution to conceal numerous unsightly structural components. 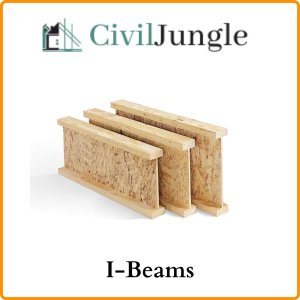 An I-beam is a type of light beam support that is made by gluing together hardwood flanges, fiberboard, and plywood webs. Building base floor-, intermediate floor-, and roof structures, as well as exterior wall frames, are examples of applications.

I-beams are ideally suited for constructions that require stiffness, heat insulation capacity, dimensional perfection, and cost effectiveness. The beams are simple to work with using standard carpentry equipment, and holes in the web plates may be drilled for electrical and HVAC installations.

When modifying the beams, however, the manufacturer’s or structural designer’s recommendations must be followed. Because a flanged beam may accomplish the same load-bearing capacity with less material than glued laminated timber or sawn timber, the price is likewise competitive. 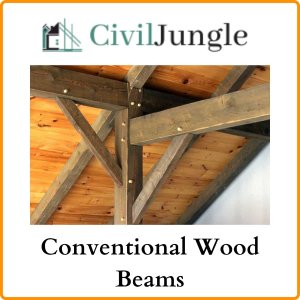 Traditional wood beams are quite heavy and hence difficult to deal with. A beam must be held in place at both ends by multiple people while a third person instals it. Some beams are heavy enough to need the use of lifting equipment.

Conventional beams, due to their great weight, may cause structural issues with the roof and ceiling. This frequently precludes the use of ordinary wood beams on existing dwellings without the assistance of a structural engineer to strengthen the roof.

Conventional wood beams are also prone to a variety of issues, including cracking, splitting, and twisting when the wood dries out. This can cause damage to the ceiling and walls. You may also have to deal with rotting or woodworms if you use these types of wood beams. 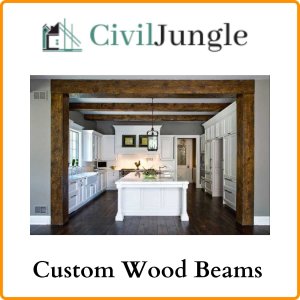 Custom Wood Beams are handcrafted from 1 inch stock, which means there is significantly less moisture in the wood, resulting in less twisting as it dries.

Furthermore, we may create Custom Wood Beams in whatever size we choose, whereas solid core beams are restricted to the size of the tree from which they are cut.

Furthermore, our expert carpenters have mastered a one-of-a-kind jointing method. We can exactly match the hewn and grain of existing beams, making our Custom Wood Beams indistinguishable from standard wood beams.

All right we’re gonna stain this mantle right here using this minmax espresso 273 we’re just going to move circles getting all that staining in the nail holes whatever scars are in the wood.

The best kind of lumber for these walls is Douglas fir pressure treated with preservatives to discourage rot. It will be green or brown in color and rated for earth-to-wood contact. For timber walls, large timbers for can be very expensive, which is why railroad ties are a common alternative.

On average, faux wood beams cost less upfront than real wood. This is because they are made of lightweight polyurethane, which is a far more cost-effective material than hardwood.

Customers often ask us to ‘sandblast’ their beams, floors, oak panels and brickwork, classic cars or antique furniture , however, we explain that sandblasting oak beams and these other delicate items would not only remove and damage the surface layer but potentially create untold and irreparable damage.

Rotting wood can be repaired by first removing any rot from the original board or beam of wood. Once that has been done, you can fill the area with a wood-patch or polyester filler. This material will fill the area and harden to provide strength and durability.

On average, faux wood beams cost less upfront than real wood. This is because they are made of lightweight polyurethane, which is a far more cost-effective material than hardwood.

Floor joists are horizontal structural members that span an open space, often between beams, which subsequently transfer the load to vertical structural members. These joists, part of the floor system, carry the weight of everything inside a room, including walls, furniture, appliances, and even people.