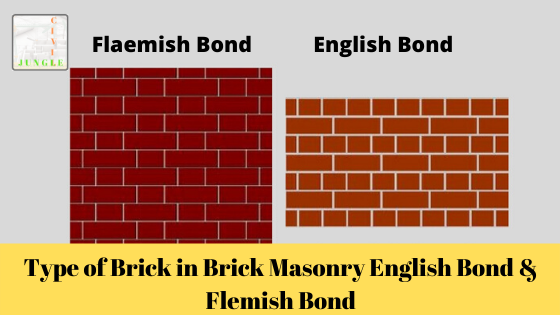 Various types of bonds in brick masonry used for wall construction are classified depends on bonding style and laying of bricks in walls.

The bond pattern used in brick masonry is developed by the mortar filling between two layers of bricks and in grooves when bricks are laid adjoining to each other on layers in walls.

What Is an English Bond? 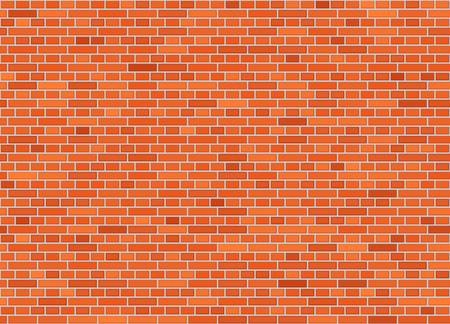 This English bond used in brick masonry, it has only one course of stretcher and course of header just above it, i.e., it has two alternating courses of headers and stretchers.

In this bond, Headers are laid in the middle on the stretchers in course under, and each alternate row is perpendicularly associated. To change the pattern or To break the link of vertical joints, quoin closer is used in the starting and end of a wall just after the first header.

The quoin close is a part of a brick cut down lengthwise into two similar halves and used in corners area in brick walls.

The basic concepts of English bond

Stretchers and Headers are laid in interchange courses. This is one of the Strongest types of bonds. It will Provide a rough appearance on the surface.

In its presentation, you will find the structure without vertical joints in brick masonry. During the construction of this bond, it does not require any individual attention.

Work done in between the given time is more compared to another bond. It is beat Costly in compare to others; brickbats are used in a rare case.

For the construction of this bond, no Skilled labor required. Less mortar is used for this bond.

What Is Flemish Bond? 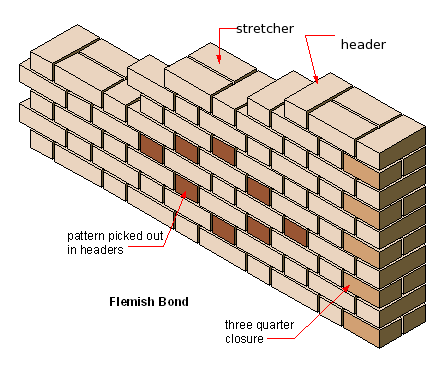 When it is necessary to divert patterns of connection or for the changing of vertical joints in the following courses in brick masonry, closers are inserted in interchange courses just next to the quoin header.

Some times in walls construction, walls having their thickness similar to the odd number of half bricks, bats are effectively used to complete the bond.

This Flemish bond, also well-known as Dutch bond, is created by laying alternating stretchers and headers in a single course.

The next course of brick is arranged in such a way that the header lies in the center of the stretcher in the course below, i.e., the alternate headers of each course are in the middle of the stretcher, of course, set below it.

In this types of bond, every alternative course of this Flemish bond starts with a header at the corner.

Only in one case, the thickness of the Flemish bond is lowest in full brick.

The demerits of using this Flemish bond are that construction of Flemish bond is complex and requires higher expertise to lay it on proper place as all vertical mortar joints need to be associated vertically for best bonding effects.

For the changing pattern or breaking of vertical joints in the successive courses, closers are inserted in alternating courses next to the quoin header.

In walls having their thickness similar to an odd number of half bricks, bats are acceptable for getting the best bonding.

The Flemish bonds have a better outward show. However, they are weaker than English bonds for load-bearing in wall construction.

Hence, if the pointing has to be done for brick masonry in wall construction, then the Flemish bond may be used for a better aesthetic outlook.

When the walls have to be plastered, English bond is the best choice for it.

Flemish bonds are classified as:

The smallest thickness essential for a single Flemish bond is one and a half brick thickness.

The major point of using a single Flemish bond is to offer higher aesthetic looks on the front side of the wall surface with required strength in the brickwork by using an English bond.

The Double Flemish Bond has a similar appearance from both sides of the face in the front and back elevations, i.e., in each course, it consists of alternating stretcher and header.

This type of bonding is somewhat weaker than the English bond.

In this bond, stretchers and Headers are laid alternately in each course. If the thickness of the wall more than 30cm, than this bond is Comparatively less strong.

It provides a good appearance. In this bond, Partly incessant vertical joints appear in the structure. It needs Special concentration is essential for this bond. It’s beat hard to build. Hence Progress of work is less.

Very acceptable due to it is Economical, as brickbats are used, on another hand More mortar is used due to the use of bats.due to a complex arrangement of pattern, Skilled labor required for the construction of this bond.

Flemish bond (plural Flemish bonds) (masonry) In bricklaying, an arrangement of bricks such that each course consists of alternate bricks having their short sides (headers) and long sides (stretchers) facing outwards, with alternate courses being offset.