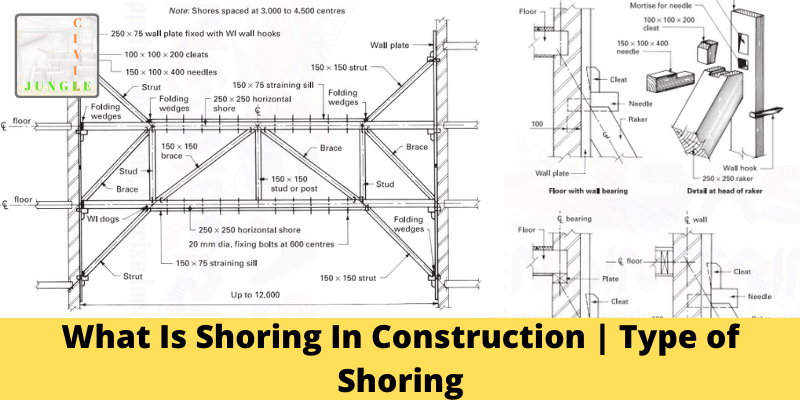 What Is Shoring In Construction?

Shoring is the process of temporarily supporting a building, vessel, structure, or trench with shores (props) when in danger of collapse or during repairs or alterations. Shoring comes from shore, a timber or metal prop.

Shoring can be utilized when walls bulge out when walls crack due to unequal settlement of foundation and repairs must be carried out to the cracked wall, when an adjacent structure needs pulling down when openings must be newly enlarged or made into a wall.

All forms of shoring are temporary supports applied to a building or structure. The assembly and dismantling of a shoring system must comply with the requirements of the Construction (Health, Safety, and Welfare) Regulations 1996, particularly Regulations 9 and 10.

These relate to work on structures where there is a perceived risk of accidental collapse and danger to any person on or adjacent to the site.

Relevant clauses relating to risk assessment also occur in the Work at Height Regulations 2005. Although shoring is an interim measure while a permanent support structure is built, it can remain in place for a considerable time.

Therefore it is no less important than other aspects of construction. Regardless of the time it is to remain in place, it must be subject to planned safety procedures and competent supervision during assembly, dismantling, and any associated demolition.

Also, read: What Is Concrete | 31 Different Types of Concrete

The Following Situations May Justify the Application of Shoring:

To give support to walls that are dangerous or are likely to become unstable because of subsidence, bulging, or leaning.

To avoid failure of sound walls caused by the removal of underlying support, such as where a basement is being constructed near a sound wall.

During demolition works to give support to an adjacent building or structure.

To support the upper part of a wall during the formation of a large opening in the lower section of the wall.

To give support to a floor or roof to enable a support wall to be removed and replaced by a beam.

Structural softwood is the usual material used for shoring members; its strength to weight ratio compares favorably with that of structural steel, and its adaptability is superior to that of steel.

Shoring arrangements can also be formed by coupling together groups of scaffold tubular.

Each shoring system has its own function to perform and is based upon the principles of a perfectly symmetrical situation.

The simplest example is shown in below single figure raker, and short wall plank or binding combine with a sole plate and needle and cleat at the top. 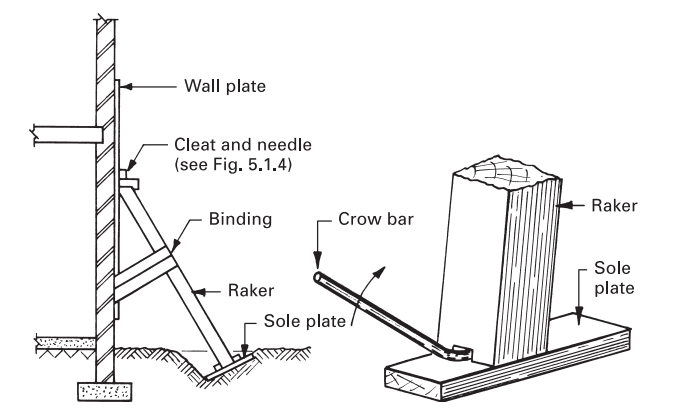 The sole-plate is set in the ground and inclined at a slightly acute angle to the raker. This allows the raker to be levered and tightened in place with a crowbar before securing with cleats and dogs.

Where flying shores are required, the disposition of buildings does not always lend itself to symmetrical arrangements.

Some asymmetrical examples are shown in the below figure for details of regularly disposed flying shore components. 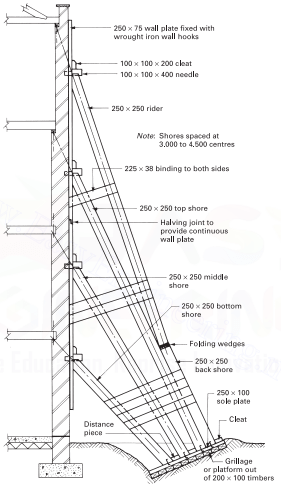 This type of shoring is used to support dead loads that act vertically downwards. In its simplest form, it consists of a vertical prop or shore leg with a head plate, sole-plate, and some means of adjustment for tightening and easing the shore.

The usual arrangement is to use two shore legs connected over their heads by a horizontal beam or needle. The loads are transferred by the needle to the shore legs and hence down to a solid bearing surface.

It may be necessary to remove pavings and cut holes in suspended timber floors to reach a suitable bearing surface; if a basement is encountered, a third horizontal member called a transom would be necessary because it is impracticable to manipulate a shore leg through two stories.

A typical example of this situation is shown in the below figure. 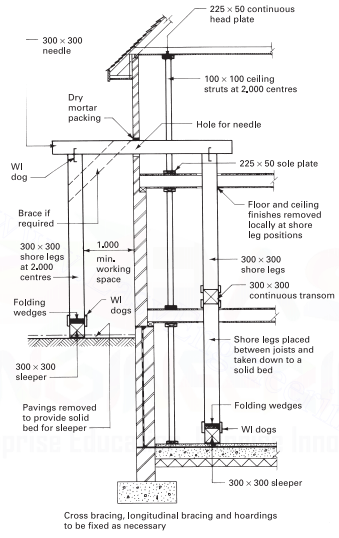 The sequence of operations necessary for a successful dead shoring arrangement is as follows:

1. Carry out a thorough site investigation to determine.

2. Fix ceiling struts between the suitable head and sole plates to relieve the wall of floor and roof loads. The struts should be positioned as close to the wall as practicable.

3. Strut all window openings within the vicinity of the shores to prevent movement or distortion of the opening.

The usual method is to place timber plates against the external reveals and strut between them; in some cases, it may be necessary to remove the window frame to provide sufficient bearing surface for the plates.

4. Cut holes through the wall slightly larger in size than the needles.

5. Cut holes through ceilings and floors for the shore legs.

6. Position and level sleepers on a firm base, removing pavings if necessary.

Upon completion of the builder’s work, it is advisable to leave the shoring in position for at least seven days before easing the supports, to ensure the new work has gained sufficient strength to be self-supporting.

This shoring arrangement transfers the floor and wall loads to the ground by means of sloping struts or rakers. It is very important that the rakers are positioned correctly so that they are capable of receiving maximum wall and floor loads.

The centreline of the raker should intersect with the centrelines of the wall or floor bearing; common situations are detailed in the below figure. 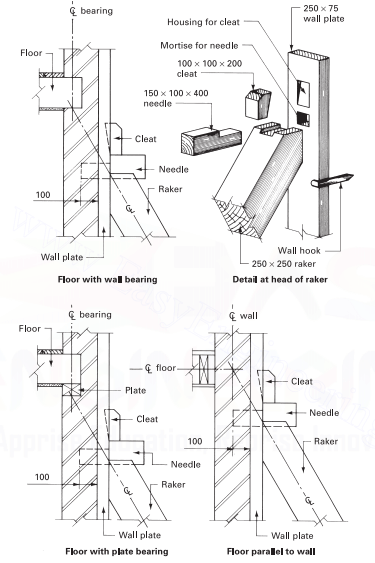 One raker for each floor is required and ideally should be at an angle of between 40° and 70° with the horizontal; therefore, the number of rakers that can be used is generally limited to three.

A four-story building can be shored by this method if an extra member, called a rider, is added (see below figure).

The operational sequence for erecting raking shoring is as follows:

These shores fulfill the same functions as a raking shore but have the advantage of providing a clear working space under the shoring.

They can be used between any parallel wall surfaces provided the span is not in excess of 12.000 m when the arrangement would become uneconomic.

Short spans up to 9.000 m usually have a single horizontal member, whereas the larger spans require two horizontal shores to keep the section sizes within the timber range commercially available (see below figure Typical Single Flying Shore and 5.1.7). 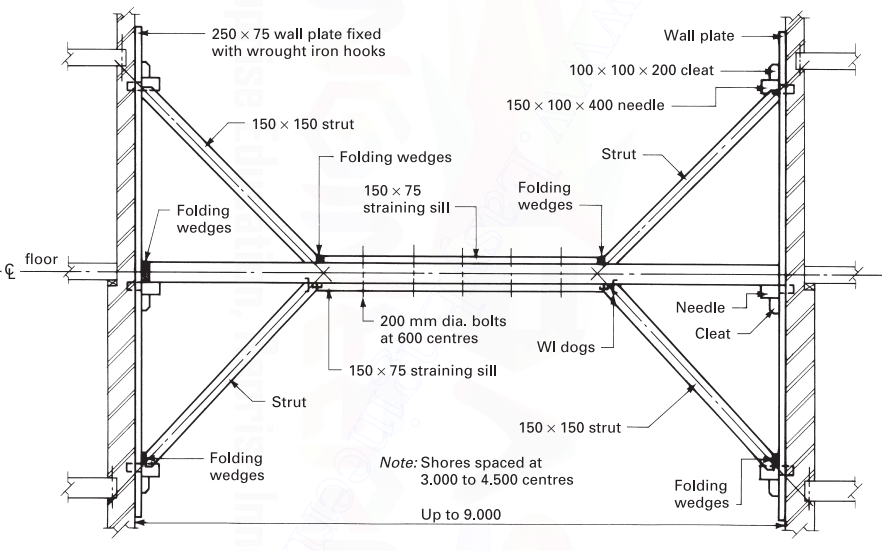 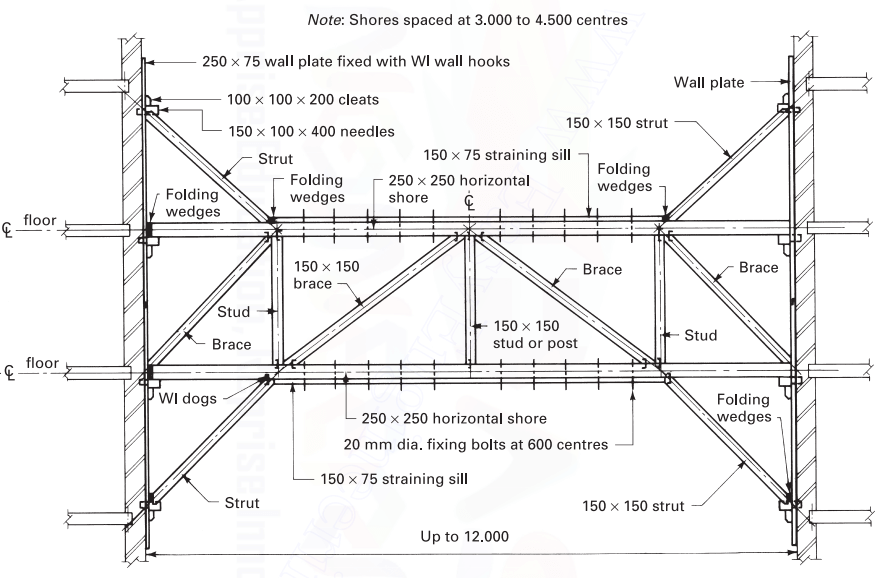 It is possible with all forms of shoring to build up the principal members from smaller sections by using bolts and timber connectors, ensuring all butt joints are well staggered to give adequate rigidity.

This is, in effect, a crude form of laminated timber construction. The site operations for the setting out and erection of a flying shoring system are similar to those listed for raking shoring.

Shoring is the process of temporarily supporting a building, vessel, structure, or trench with shores (props) when in danger of collapse or during repairs or alterations. Shoring comes from shore, a timber or metal prop. Shoring may be vertical, angled, or horizontal.

What Is Shoring in Construction?

Shoring, a form of prop or support, usually temporary, that is used during the repair or original construction of buildings and in excavations. Temporary support may be required, for example, to relieve the load on a masonry wall while it is repaired or reinforced.

Vertical Shores are the lightest and easiest way to protect your excavation. They are designed to be installed or removed (typically by one person) from the top of your trench. Vertical Shores apply hydraulic pressure to the trench walls for support and to prevent cave-ins.

What Is Shoring and Scaffolding?

Shoring walls are temporary retaining structures that prevent soil movement and cave-ins during a construction site excavation. These systems are used to minimize the excavation area, to keep the sides of deep excavations stable, and to ensure that movements will not cause damage to existing adjacent structures or to utilities in the surrounding ground.

Temporary shoring is an emergency band-aid that provides a shelter for structural integrity when a building has lost its stability. Not a “fix,” it is a way to hold the problem steady until a repair can be made and it helps to stop any further insult to the building in the interim.

Shoring is the process of temporarily supporting a building, vessel, structure, or trench with shores (props) when in danger of collapse or during repairs or alterations. Shoring comes from shore, a timber or metal prop. Shoring may be vertical, angled, or horizontal.

3 thoughts on “What Is Shoring In Construction | Type of Shoring”