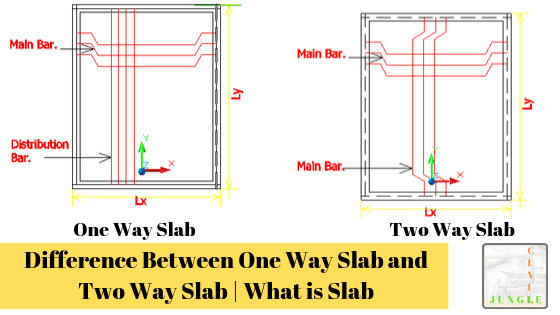 A slab is constructed to provide flat surfaces, typically horizontal, in building roofs, floors, bridges, and other types of structures. The slab could be supported by walls, by reinforced concrete beams normally cast monolithically with the slab, by structural steel beams, either by columns or from the ground.

A slab is a plate element having depth (D), very small as compared to its length and width. A slab is used as floor or roof in buildings, carry distribution load uniformly. 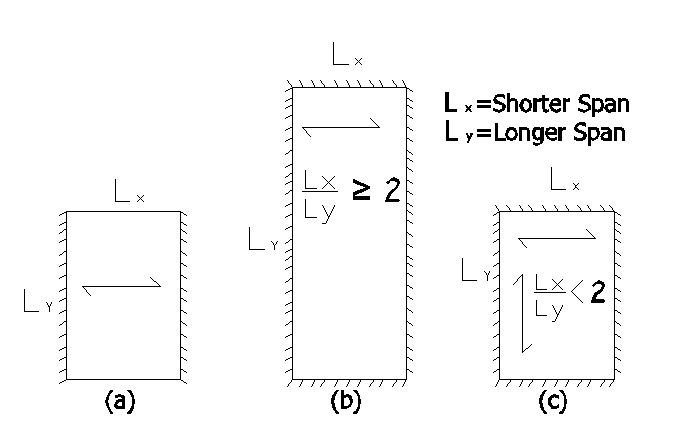 Type of Slab b

Type of slabs based on support conditions are:

What Is a One Way Slab?

According to IS 456:2000, The ratio of longer span(l) to shorter span(b) which is (L/B) greater than 2 is known as One way slab. In practical, One way slab is supported by only two parallel beams or walls. Normally we don’t use one way slabs often. 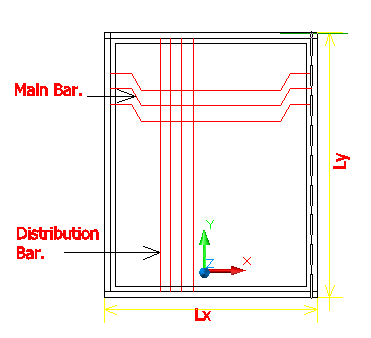 The most straightforward routine structural element for illustration of design provisions from the Code is that the one way slab.

A one way slab is defined for functions of the book as a flexural member with thickness small relative to other dimensions, supporting (gravity) loads applied normal to and directly above its surface, a span in one direction between parallel supports, and fortified for flexure in this direction only.

For purposes of analysis, one way slabs might be restrained to some degree in the supports or possibly unrestrained. A number of Code provisions reference to “flexural members,” including one and two way slabs, beams, girders, footings, as well as where bending is present together with the axial walls, load, and columns.

In general, when this code provision is intended to use to one way slabs, the term is going to be utilized in the sense of this definition herein.

If the slab is supported at four sides, and if Ly/Lx ≥ 2 one way spanning slab.

For any slab, if Ly = Lx, the slab has a tendency to bend in both directions. With an increase of Ly, the tendency of bending along Ly is reduced and that on Lx is increased.

When Ly/Lx ≥ 2, the slab bends only in X directions

When Ly/Lx ≥ 2, the slab is called a one way slab. In one way slab, the main reinforcement is provided along Lx ( Short Span)

What Is a Two Way Slab?

A two way street is a street that allows vehicles to travel in both directions. On most two way streets, especially main streets, a line is painted down the middle of the road to remind drivers to stay on their side of the road. Sometimes one portion of a street is two way and the other portion is one way. 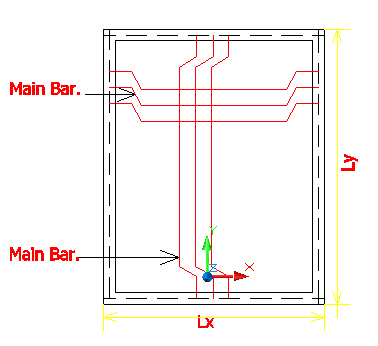 The design considerations of wall supported two way slabs are similar to those pertaining to one way slabs.

The thickness of the slab is generally based on deflection control criteria, and the reinforcements in the two orthogonal directions are designed to resist the calculated maximum bending moments in the respective directions at the critical sections. [Additional reinforcement may be required at the corners of two way slabs in some cases, as explained later].

The slab thickness should be sufficient against shear, although shear is usually not a problem in two way slabs subjected to uniformly distributed loads.

If the slab is supported at all four edges and if  Ly/Lx < 2,

The tendency of the slab is to bend in both directions. Such slab is called two way slab as per above figure  c

In two way slabs, main reinforcement is provided along Lx as  well as Ly direction

What Is the Flat Slab?

When the slab is directly supported on a column, without beams, it is known as a flat slab.

Flat slab is provided to increase the floor height and to permit a large amount of light which might be obstructed by the depth of beams.

What Is Grid Slab? 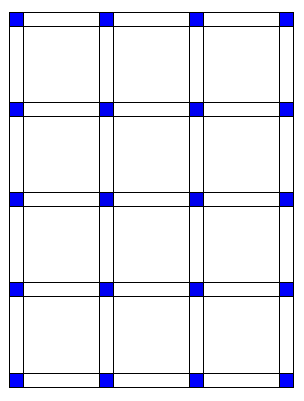 When the slab is supported on beams with column only on the periphery of the hall, the slab is called grid slab. Sometimes, in large halls, public places, marriage halls, auditoriums, etc. a large column free area is required.

In these cases, large deep beams may be permitted, but the columns are permitted only on the periphery.

Slabs are primarily flexural members as beam and are analyzed and designed in the same manner as the beams. The analysis may be carried out as follows:

A strip of 1 m width of the slab is considered, and loads are found on this strip. This strip id analyzed as a beam 1 m width.

This is a semi empirical method of analysis based on yield line theory. The coefficients give in code may be directly used to analyze the slabs.

However, the redistribution of moments is not permitted in this case.

This is a limit state design or collapse load method developed by Johanson.

Difference Between One Way Slab and Two Way Slab

A concrete slab is a common structural element of modern buildings, consisting of a flat, horizontal surface made of cast concrete. Steel-reinforced slabs, typically between 100 and 500 mm thick, are most often used to construct floors and ceilings, while thinner mud slabs may be used for exterior paving.

One–way slab is a type of concrete slab in which loads are transferred in one direction to the supporting beams and columns. Therefore, the bending occurs in only one direction. The design of one–way slab is simple and can be carried out easily. Slabs are used to provide flat, useful surfaces.

One Way Vs Two Way Slab

Difference Between One Way Slab and Two Way Slab