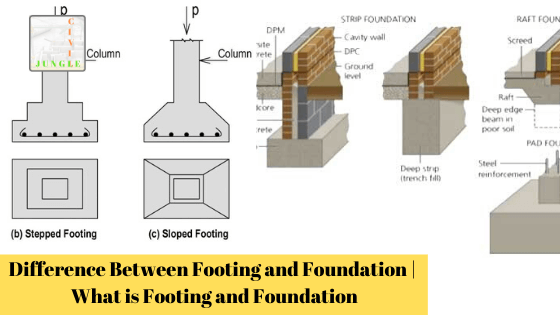 Foundation Definition: The footing is generally supporting columns and may be round, square, or rectangular at a plan and in section.

They may be of the slab — stepped or sloping type. Thia stepped footing results at a better distribution of load than a slab footing.

A sloped footing isn’t less economical, although constructional problems are associated with this sloping surface.

The isolated spread footing at plain concrete has the advantage that the column had is transferred to the soil through dispersion at the footing.

Foundation detail: In reinforced concrete footings. i.e., pads. This slab is treated as an inverted cantilever bearing this soil pressure and supported by the column.

Where a two-way footing is provided, it can be reinforced at two directions of bending with bars of steel placed in this bottom of the pad parallel to its sides.

If clearances permit, two-way square footings used to reduce the bending moments. Where not less than one column is placed on pads (combined footing).

Their shapes can be rectangular or trapezoidal; the latter produces a more economical design where large differences of the magnitude of the column loads exist or where rectangular footings cannot be accommodated.

The specifications and quantities can change depending on the column loads and the spread area. 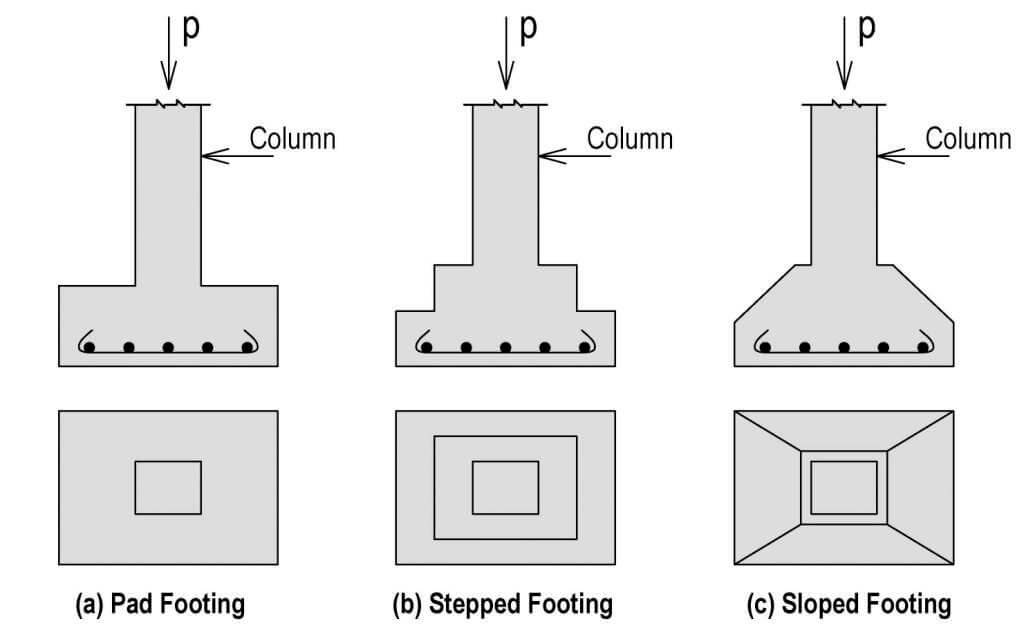 Define Footings:  Foundation Engineering is a subject built on the basic principles of Soil Mechanics, Soil Hydraulics, and Structural Mechanics.

All these three together may be considered as the pillars of Foundation Engineering.

A wrong application of the principles of any one of the three subjects may lead to a faulty design of the foundation.

Theories have been developed for the design of foundations to suit ideal soil conditions.

However, such conditions rarely exist in nature since soils found in natural conditions are mostly heterogeneous in character.

Theories can have to be modified or adjusted to suit field conditions.

A foundation is a part of a superstructure.

The stresses and strains that are brought to the foundation from the superstructure would lead to interaction between the foundation structural element and the soil surrounding it.

It is this interaction that is very difficult to evaluate, as this is quite a complex phenomenon.

The theories that have been developed for ideal conditions do not take into account all the variables that would lead to the interaction between the soil and the foundation element.

The presence of a water table would make the interaction problem all the more difficult to solve.

It is, therefore, essential that a design engineer should have a thorough knowledge of the theories he wants to use for the design of foundations and also its limitations.

Knowledge of the theories and its limitations by themselves will not lead to the design of a safe and sound foundation if the environmental conditions, the strength and settlement characteristics of the soil are not properly known in advance.

This requires, therefore, a practical and pragmatic approach to the problem of design and construction while keeping in view the safety and economics of the project.

Difference Between Footing and Foundation

Difference Between Footing and Foundation

A continuous footing is the one which supports more than two columns. The footing is analogous to the strip footing for a wall. The loads from the individual columns are transferred either directly to the footing slab, or through a longitudinal beam running longitudinally when the loads are heavy.

Is Footing and Foundation Same?

Foundation is a structure which transfers the loads from the superstructure to the ground, while footing is the foundation which is in contact with the earth. A foundation can be shallow and deep, while a footing is a type of a shallow foundation. so, all footings are foundations but all foundations cannot be footings.

What Are Footings and Foundations?

Footings are an important part of foundation construction. They are typically made of concrete with rebar reinforcement that has been poured into an excavated trench. The purpose of footings is to support the foundation and prevent settling. Footings are especially important in areas with troublesome soils.