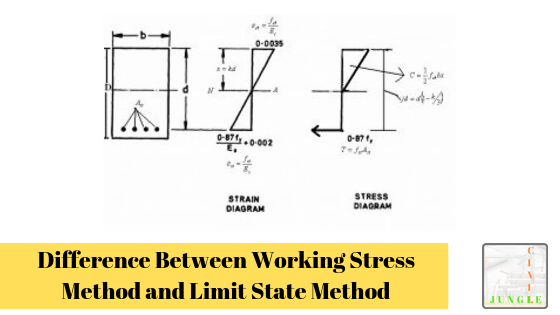 A reinforced concrete structure must be so designed that it fulfills its intended purpose during its intended lifetime with :

Thus, all structures must be designed to be safe, serviceable, and economical. Reinforced concrete members can be designed by one of the following two methods:

The following design methods are utilized for the design of reinforced concrete structures/elements : 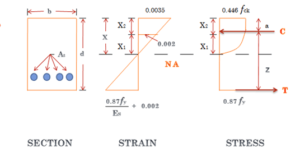 This is the traditional method of design. Used not only for reinforced concrete but also for structural steel and timber. Close to about a hundred years old, the method is based on linear elastic theory or the classical elastic theory.

This method of design was evolved around 1900 and was the first theoretical method accepted by stresses are kept well below the ultimate strength of their material.

This method ensures adequate safety by suitably restricting the Pressure in the materials (i.e., concrete and steel) induced by the expected working loads on the structure.

The assumption of linear elastic behavior is deemed justifiable because the specified permissible (or allowable) stresses are kept well below this ultimate strength of their material.

The ratio of the yield stress of the steel reinforcement or the cube strength of the concrete into the corresponding permissible or working pressure is usually known as the factor of safety.

Reinforced concrete is a composite material. The WSM assumes strain compatibility. Whereby the strain in the reinforcing steel is assumed to be equal to that in the adjoining concrete to which it is bonded.

Most structures designed in accordance with WSM have generally been performing satisfactorily for many years. However, the method has the following demerits:

The WSM doesn’t show the actual strength nor gives the true factor of safety of this structure under failure.

The modular ratio design results in a larger percentage of compression steel than that given by the limit state design, thus leading to un-economic design.

Because of creep and non-linear stress-strain relationships, concrete does not have a definite modulus of elasticity.

The WSM fails to discriminate between different kinds of loads that act simultaneously but Possess different uncertainties.

In spite of the above defects, the WSM has the advantage of its simplicity. Both in Theory, in addition to the application.

WSM is the only method available when one has to investigate the R.C. section for service stresses and for the serviceability states of deflection and cracking.

It is essential to have a knowledge of WSM since it forms a pan of limit state design (LSD) for a serviceability condition.

The ultimate load is obtained by enhancing the service load by some factor referred to as a load factor for giving a desired margin of safety.

Thus the method is also referred to as the load factor method or the ultimate strength method. The ULM was introduced as an alternative to WSM in the ACI Code in 1956, the British Codes in 1957 and the Indian Code in 1964.

In the ULM method, stress condition at the state of an impending collapse of the structure is analyzed, thus using the non-linear stress-strain curves of concrete and steel. The safety measure in the design is obtained by the use of proper load factor.

Since the method utilizes a large reserve of strength in the plastic region (inelastic region) and of ultimate strength of member, the resulting section is very slender or thin.

This gives rise to excessive deformation and cracking. Also, the method does not take into consideration the effects of creep and shrinkage.

The method does not take into consideration the serviceability criteria of deflection and cracking.

The use of high strength reinforcing steel and concrete results in an increase of deflection and crack width.

The method does not take into consideration the effects of creep and shrinkage.

This is erroneous since significant redistribution of stress resultants takes place as the loading is increased from service loads to ultimate loads.

To summarise, the ultimate load method ensures safety at ultimate loads but disregards the serviceability at service loads. 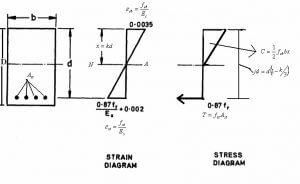 We have seen that while the WSM gives a satisfactory performance of the structure at working loads, it is unrealistic at the ultimate state of collapse.

Similarly, while the ULM provides a realistic assessment of safety, it does not guarantee satisfactory serviceability requirements at service loads.

An ideal method is the one that takes into account not only the ultimate strength of the structure but also the serviceability and durability requirements.

The newly emerging ‘limit state method’ of design is oriented towards the simultaneous satisfaction of all these requirements.

In the limit state method, a structure is designed for safety against collapse (i.e., for ultimate strength to resist ultimate load) and checked for its serviceability at working loads, thus rendering the structure fit for its intended use.

Thus, the LSM includes consideration of a structure at both the working and the ultimate load levels with a view to satisfying the requirements of safety and serviceability.

The European Committee for Concrete (CEB) and the International Federation for Prestressing (FIP) were amongst the earliest to introduce the philosophy of limit state method, which is reliability-based in concept.

These were subsequently revised by CEB-FIP as the ‘Model Codes for Concrete Structures’ as a model for national Codes to follow.

The acceptable limit of safety and serviceability requirements. Before failure occurs, it is called a limit state.

A limit state is a state of impending failure, beyond which a structure ceases to perform its intended function satisfactorily, in tennis of either safety or serviceability. i.e., it either collapses or becomes unserviceable.

The purpose of the design is to achieve acceptable probabilities that the structure won’t become unfit for the use for which it’s blended. That’s. It will not reach a limit state.

As per IS 456: 2000. All limit states (see § 2.5) shall be considered in the design to ensure an adequate degree of serviceability and safety.

In general, the structure will be designed on the basis of the most critical limit state and will be {checked|assessed} for other limit states.

To make sure the above objectives, the design ought to be based on feature Values for substance strengths and applied loads, which take into account the variations in the material strengths and also at the loads to be supported.

The characteristic values should be determined by statistical data when available; in which these data aren’t available, they need to be dependent upon experience.

The’design values’ are derived from the characteristic values through the utilization of partial safety factors, one for material strengths and another for loads.

What Is Rcc Design Method?

Working Stress Design Method is a method used for the reinforced concrete design where concrete is assumed as elastic, steel and concrete act together elastically where the relation ship between loads and stresses is linear.

What Is WSM and LSM?

What Is Working Stress Method in RCC?

Working Stress Method is the traditional method of design not only for Reinforced Concrete but also for structural steel and timber design. The stresses under the working loads are obtained by applying the methods of ‘strength of materials’ like the simple bending theory.

Working Stress Design Method is a method used for the reinforced concrete design where concrete is assumed as elastic, steel and concrete act together elastically where the relation ship between loads and stresses is linear .

Which Is an Advantage of Working Stress Method?

What Are the Disadvantages of Working Stress Method?

Difference Between LSM and WSM

Working Stress method is the old way of designing, in present era structures are generally designed using Limit State Method. In WSM concrete is considered elastic whereas in LSM concrete is generally assumed as plastic.

Ultimate Strength Design method is used extensively and almost exclusively in many countries for structural design practice .The Working Stress Design (WSD) method designs RC sections assuming them to be within their elastic limits, where stresses are proportional to strains. Large margins or factors of safety are assumed on material strengths to ensure such behavior.

What Is the Ultimate Load Method?

In this method, the structural element is proportioned to withstand the Ultimate Load which is obtained by enhancing the service load by some factor referred to as load factor for giving a desired margin of safety.