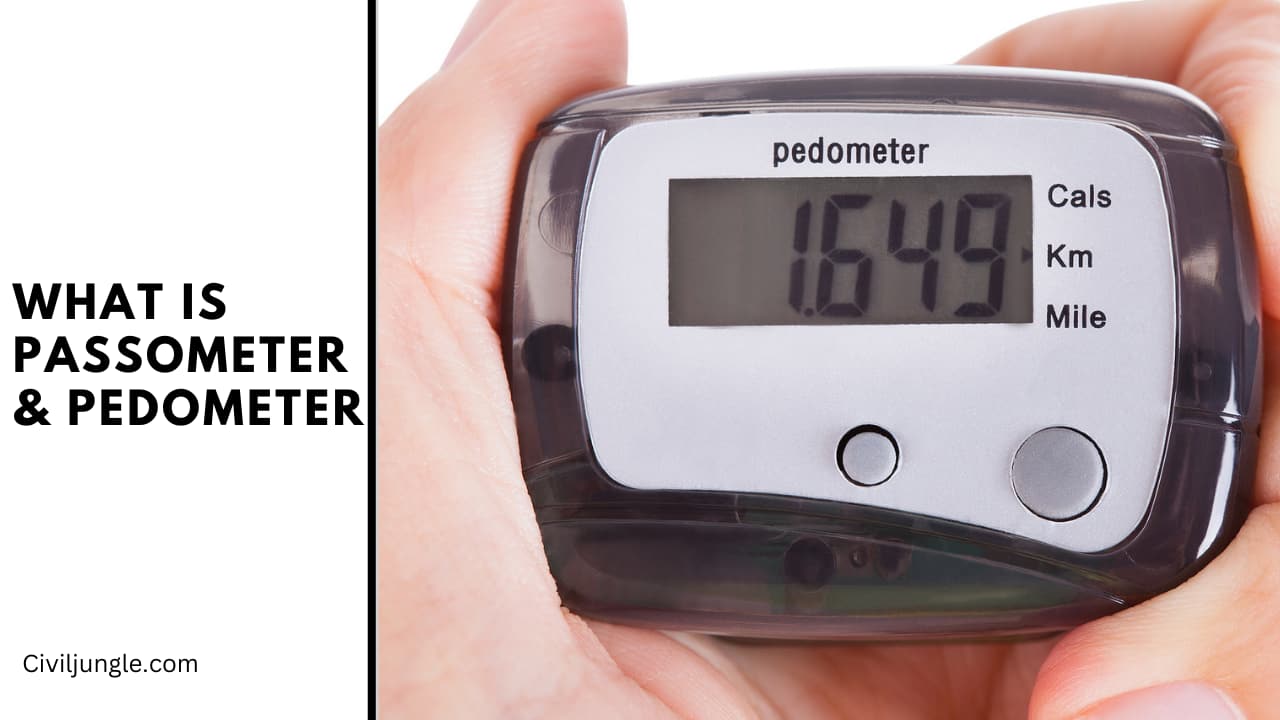 Passometer is an electromechanical and portable instrument, which count the number of paces or velocity of the body movement.

It automatically records the number of paces. Its mechanism is being operated by the movement of the body.

Passometer is an electromechanical device.

Moreover, it is portable, which makes it handy to use at any location or field.

This instrument looks like a watch or speedometer of any mechanical device and is carried in a pocket or attached to one leg.

Its mechanism has been operated by the motion of the body, and it automatically registers the total number of paces, furthermore for alleviating the monotony and strain of calculating the paces, by the surveyor.

It has the capability to count circular or periodic measurements. The pedometer is an identical device to the Passometer, excluded it’s an adjustment to the length of the pace of the person holding.

It is also an electromechanical, moreover portable instrument, which counts each step a person takes by recognizing the body motion of the person’s hands or hips.

Chiefly it counts the distance how much the user crosses, furthermore how much distance covered by them. It is adjusted base on the length of the pace of the person carrying it.

The vital thing, in case of this device to use it vertically for accurate measurement by an approximate method of linear measurement. Passometer is available in the market with various kinds of varieties in their appearances and their size.

Priorly men used a mechanical Passometer, which completely relied on an analog system.

This instrument can’t measure the actual values; however, nowadays, mainly all prefer to used digital Passometer and Pedometer.

Whereas, its look likes elliptic and circular shape, moreover square and rectangular are also available in the market. Priorly, people used to with a huge shape of the instruments.

At present, a portable and tiny device in use. Due to advancements in technology, Passometer and  Pedometer are also available on mobile applications, which make calculations very handy.

This device normally works in that method, which is very easy to understand and operates, moreover the electronic method used to count and display the numbers.

Mostly it made by electronic circuits,  pendulum (made by metal hammer joint with small weight).

As commencing motion, movement of the hammer starts, and it touches midpoint, which allows the current flow in a circuit.

This way, the circuit energizes, and it calculates the initial step. As hammer return back to its original place, it means one step completed, previous parallel circuits terminated, and with each and every new swing of the hammer, it recreates the same phenomena to count steps.

The device has a display, which shows the counted number of steps. Mostly now a days, people preferring the more accurate and precise capability of a device which totally electronics furthermore it has long-lasting validity of life.

This electronic device works on sensor systems. During the motion of the body(movements of legs), it records steps.

In the case of free running, this application will monitor the change from the accelerometer, and based on it will conclude whether the step is taken.

In some applications, features regarding the angle at which someone is holding the device, direction, the speed where it is moved, and the gravity.

The accelerometer provides the values whenever they’re changed along with the time at which the phenomenal happened.

The device counted the pace of the body directly. The LCD display showed a number of steps. However, to calculate the distance by Pedometer, here are nom to determine distances “Distance = Number of steps × Step length.”

But in developed Pedometers, the distance can be shown directly in detail. The top model of Pedometer is precise up to within ± 5% error.

There are some units used in Pedometer and Passometer to calculate, similar to length. Mainly, they are km (Kilometer) scale or mile scale or ft (foot) scale.

These systems allowed to work without GPS.

Hence it is useful in forest areas where networks hardly available.

In some specials requirements like, following some paths for running or using google maps to reach up to certain goals for runners.

Also, read: What Is EDM in Surveying | Type | Errors

Pedometers and Passometers can be a motivation tool for people wanting to improve their physical activity.

Different websites exist to allow people to track their progress; however, many will also find entering their daily heart-beat count and a step count onto a calendar to be motivational as well.

A study published at the journal of The American Medical Association Nov. 2007 concluded, source “The results suggest that the use of a pedometer is associated with significant increases in physical activity and significant decreases in body mass index and blood pressure.”

Mainly this both devices Passometer and Pedometer prefer by sports personal and physical activist, these are one kind of trend or craze or everyday exercise counter and health fitness business.

Passometer and Pedometer used in many ways, like in following path and counting steps while running or walking exercise.

While starting any health fitness activity, firstly, you have to fix some target or benchmarks to reach there within a certain limit of time and would like to monitor it.

If you are planning to take part in any competition, like a marathon, you make a schedule of running every morning.

You run every follow and day the same or different path. Sometimes you feel very reduce and tired the distance, or sometimes you increase the distance, But you don’t have a track of if your stamina or performance is either increasing or not.

You’re planning, and practices scrutinize on a regular bases. It will capture the details like pace and distance covered each day, Steps taken, and duration.

You can review your performance after weeks and days to check whether it’s improving or not. These tools may be a motivation tool for people wanting to increase their physical activity.

To sum up all things, both devices are very vital in various ways. Moreover, it’s handled with very ease by less literate personals also.