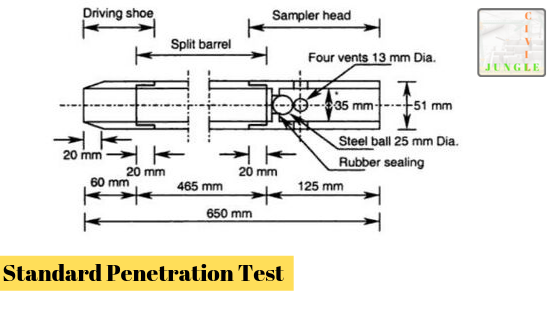 What Is the Penetration Test?

These tests involve the measurement of the resistance to penetration of a sampling spoon, a cone or other shaped tools under dynamic or static loadings.

The resistance is empirically correlated with some of the engineering properties of soil such as density index, consistency, bearing capacity, etc.

The values of these tests lie in the amount of experience behind them. These tests are useful for general exploration of erratic soil profiles, for finding the depth to bedrock or hard stratum and to have an approximate indication of the strength and other properties of soils, particularly the cohesionless soils, from which it is difficult to obtain undisturbed samples.

What is the SPT Test? 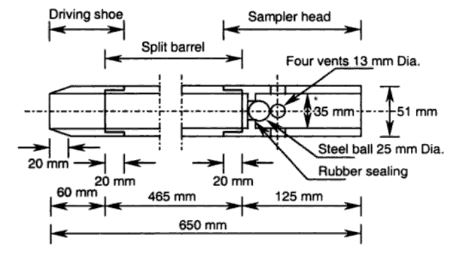 #1. Corrections to Be Observed N Values-

The observed value of N is correct for

#1a. Correction for Overburden-

A density classification for sands has been proposed originally, in general terms, by Terzaghi and Peck, on the ground of standard penetration resistance, as shown in columns (1) and (2) of as per below table.

This dependence has been first demonstrated in the laboratory by resistance at different depths. Several proposals are made for the correction of measured N values after the work of Gibbs and Holtz. The corrected value (N1) is related to the measured value (N) by the factor CN, in which and was later confirmed in the field. Sand in the same density index would thus give different values of standard penetration resistance at different depths.

Several proposals are made for the correction of measured N values after the work of Gibbs and Holtz. The corrected value (N 0) is related to the measured value (N) by the factor Cn, where 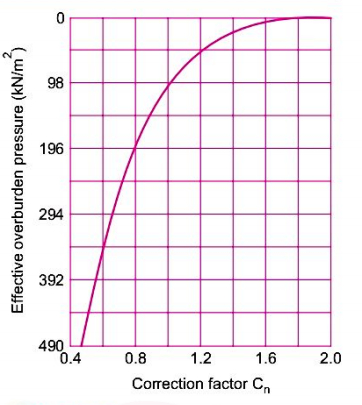 The values N o obtained after applying overburden correction is corrected further for dilatancy if the stratum consists of fine silt and sand below the water table, for values of N greater than 15, using the following expression:

#2. Overburden Pressure Correction by Other Workers-

For a constant density index, the N value increase with increasing effective overburden pressure for which correction has been proposed by Gibbs and Holtz, Peck, Thornburn, Whitman, and others.

Gibbs and Holtz (1957) have experimentally studied the effect of overburden pressure on the values of N. Their modification for air dry or moist sand can be represented by the relation :

Peck (1974) proposed that N values be reported at a reference overburden pressure of 100 kN/Sq.m., and the normalized value of N (Corrected for Overburden Pressure) be expressed as follows:

Lio and Whitman (1986) has proposed the following expression for Cn

Correlation of N with Soil Properties:

Relation between N and Ø table 2

As per the above table 2 gives the relation between corrected N value and angle of shearing Ø  resistance, as suggested by Peck (1974). 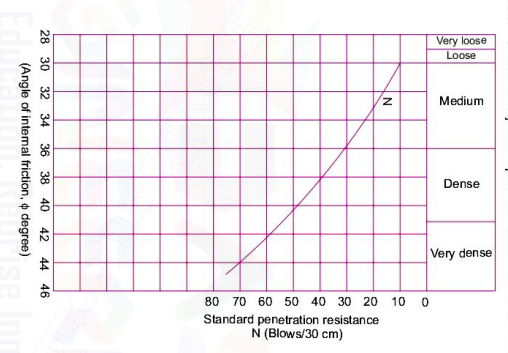 Relation between N and Ø

As per the above figure gives the graphical relationship between corrected N value and angle Ø as adopted by Indian Standard (IS: 6403-1981). This value of Ø can then be used for finding capacity factors Nc, Nq, and Ny

As per below table 3 and 4 give some empirical correlations of the soil properties with corrected penetration resistance. The approximate values of 4 are after Meyerhof (1956)

The actual energy effective in the driving of the SPT equipment varies due to many factors.

Hence, in addition to the effective overburden stress at the tested location, the SPT parameter depends on the following additional factors:

What Is Meant by Standard Penetration Test?

Standard Penetration Test (SPT) is a simple and low-cost testing procedure widely used in geotechnical investigation to determine the relative density and angle of shearing resistance of cohesionless soils and also the strength of stiff cohesive soils.

How Is Standard Penetration Test Calculated?

The sum of the number of blows required for the second and third 6 inches of penetration is termed the “standard penetration resistance” or the “N-value”. In cases where 50 blows are insufficient to advance it through a 150 mm (6 in) interval the penetration after 50 blows is recorded.

What Is SPT Drilling?

The Standard Penetration Test (SPT) is a widely employed soil exploration tool that involves using a SPT hammer to drive a split barrel sampler at the bottom of a drill string to obtain soil samples. The number of blows required to penetrate the last 300mm (1ft) is the “N value”, which is related to soil strength.

The standard penetration test, commonly known as ‘SPT’, was developed to provide geotechnical engineering properties for foundation design purposes. The test is carried out within a borehole. The results can be used to determine the relative density, bearing capacity, and settlement of granular soil.

What Is SPT N Value in Soil Test?

What Is SPT Boring?

A hammer of 63.5 kg (140 lbs) is dropped repeatedly from a height of 76 cm (30 inches) driving the sampler into the ground until reaching a depth of 15 cm (6 inches). The number of the required blows is recorded. This procedure is repeated two more times until a total penetration of 45 cm (18 inches) is achieved.

What Is N Value of Standard Penetration Test?

Standard Penetration Test (SPT) is a simple and low-cost testing procedure widely used in geotechnical investigation to determine the relative density and angle of shearing resistance of cohesionless soils and also the strength of stiff cohesive soils.

How Do You Interpret SPT and Value?

The number of blows for that 300 mm becomes the N-value. It can be done in the bottom of a borehole or at the surface. In the United States, the standard test procedure is ASTM D1586. Typical values are 0-10 for sand, 5-10 in loose clay and 10-30 in compacted clay.

What Is N Value in Soil Testing?

The N-value provides an indication of the relative density of the subsurface soil, and it is used in empirical geotechnical correlation to estimate the approximate shear strength properties of the soils.

Tools requirements to conduct SPT are Standard Split Spoon Sampler, Drop Hammer weighing 63.5kg, Guiding rod, and a Drilling Rig Driving head (anvil). The split-spoon sampler used in the SPT is driven into the soil at the bottom of the borehole with a 140-lb hammer falling 30 inches.

What Is SPT Machine?

The standard penetration test aims to determine the resistance of soils at the base of a borehole to the dynamic penetration of a split barrel sampler and the recovering of disturbed samples for identification purposes. In gravelly soils and soft rock, a solid cone is used SPT(C).

How SPT Is Done?

The test uses a thick-walled sample tube, with an outside diameter of 50.8 mm and an inside diameter of 35 mm, and a length of around 650 mm. This is driven into the ground at the bottom of a borehole by blows from a slide hammer with a mass of 63.5 kg (140 lb) falling through a distance of 760 mm (30 in).

Why SPT Test Is Done?

The standard penetration test, commonly known as ‘SPT’, was developed to provide geotechnical engineering properties for foundation design purposes. The test is carried out within a borehole. The results can be used to determine the relative density, bearing capacity, and settlement of granular soil.