What is Plum Concrete?

In mass concrete foundations, boulders of say 150 mm size up to 30% of the total quantity of concrete, are mixed in the wet concrete. This adds to economics and saves heat generation. Such concretes are called plum concretes.

After at least two layers of wet concrete is completed, well-shaped and thoroughly washed, angular rock pieces using a maximum size of not more than 60% of a layer of pour thickness are placed in the concrete, keeping a distance of more than one-and-a-half times of the biggest size of aggregates in the concrete.

The bottom of the boulders should be embedded in the wet concrete to avoid voids at the bottom. Concreting is continued without stopping.

These rock pieces become an integral part of a concrete structure. Also, read: What Is Traversing in Surveying | Types | Method | Definition

Plum concrete is used to attain the required surface-level below the foundation and footing. It is used to lessen the cost of PCC if the required thickness of PCC is large. Primarily it is used in mass concreting work such as side slops, barrier, and gravity dams.

For instance, in the construction of a residential building, the small area under a footing is too steep, then to use plum concrete.

You’re able to alter the mix design by altering the specific gravities of materials that can help it become applicable in accordance with the substance available at your location.

Changing that specific gravity will change the weight of material in mix design that is automatically calculated.

Do not use these mixes directly without doing prior trials of it; the data provided is for educational and better understanding of mixes.

After doing a trial, if any issue observed, you can make a modification by adjusting the % of each size of aggregate to attain the required properties of fresh concrete.

In general, for direct placement concrete

Also, add stone of total wattage of all concrete 40% near about 666 kg of plum(Stone) in Plum concrete

In the case of pump concrete, the fine content is kept over 45%

You’ll be able to adjust the percentages of fines and coarse by taking a look at the concrete produced during trial.

Admixtures play an important role in the properties of fresh concrete, especially in retention and workability.

Do select admixture properly to ensure no failure during the real usage of concrete.

All can answer to the thread with there mix design of the same grade; this can help others to understand design in a better way and certainly will do a cost optimization. 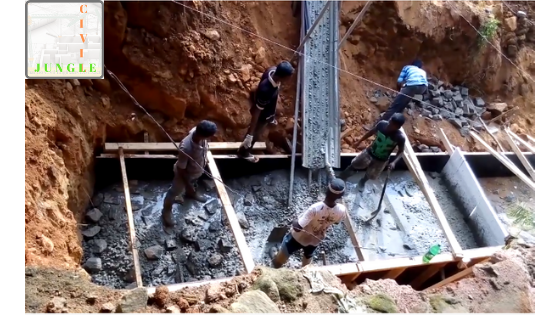 The boulders are the size of a boulder (Size) near about 300 mm, which may be lifted by laborers easily, not too big or small. maximum

2. Before placing of plum concrete in leaving and cleaning:

This nominal maximum size of coarse aggregate should be as big as possible within that the limits given but in no case greater than one-fourth of their minimum thickness of this member, provided the concrete may be placed without difficulty so as to surround all reinforcement thoroughly and fill the comers of the form.

In terms of the need of the aggregate size, which may be utilized from the plum concrete, there are different recommendations from the IS code; the code says that for most of the common works that the size of 20 aggregates is best and suitable.

If there are not any restrictions for the flow of concrete to part 40 mm or larger is also utilized. However, where you will find reinforcement or the cover is small with all the formwork, 10 mm nominal maximum size plums should be used in plum concrete.

Plums above 150 mm and around any reasonable size could possibly be utilized in plain concrete work up to a maximum limit of 20 percent by volume of concrete if specifically permitted by the engineer-in-charge.

But for all the cases, the plums will likely be dispersed evenly and will not be closer than 150 mm from the surface.

It is formed by amalgamating coarse aggregate and cement which are set underneath the foundation or footing of a structure in order to attain a level surface for allocating the load equally. The plum concrete is actually an inexpensive variation of mass concrete.

What Is Plum Concrete?

Plum concrete is an economic adaptation for mass concreting. Plums volume should not pass 30% – 40% of the total finished concrete volume. Plum concrete also refers to Cyclopean Concrete or Rubble concrete. It should not be greater than one-third of the concrete mixer cross-section.

Plain cement concrete or PCC is the most straightforward form of Concrete. It is produced by mixing primary ingredients such as cement, sand, and aggregates. While in plum concrete, instead of aggregates, medium and large stones are used as filler material instead of coarse aggregates.

The quantity of plum concrete can be calculated, Volume of Plum Concrete=Volume of Plain Concrete+volume of Stone boulder added.

How to Prepare Plum Concrete?

The Plum Concrete ratio should be 40/60, 40% plums (boulders), and 60% concrete (M10 or M15). Usually, the M15 concrete grade is used. Plums beyond 160 mm and any reasonable size may be utilised in PCC work up to the maximum limit of 20% by concrete volume when specially allowed by the engineer-in-charge.

Plum concrete is used to attain the required surface-level below the foundation and footing. It is used to lessen the cost of PCC if the required thickness of PCC is large. Primarily it is used in mass concreting work such as side slops, barrier, and gravity dams.