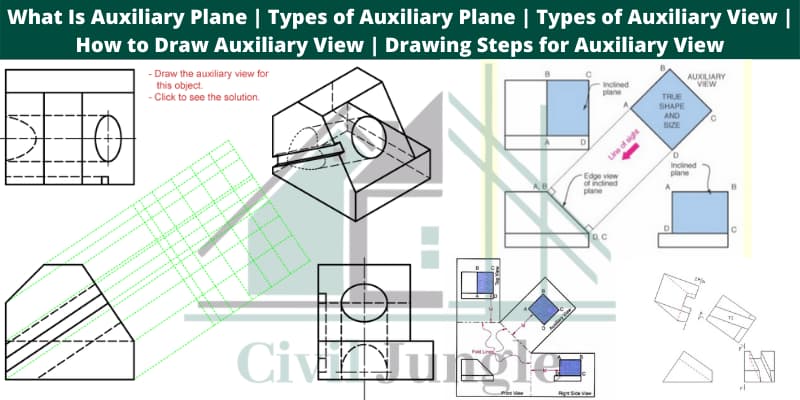 What Is Auxiliary Plane?

Auxiliary Plane The plane which we draw to get the true shape of the inclined surface ( often parallel to Principal Plane ) is an auxiliary plane.

Simply, the plane other than the Principal Plane ( i.e. Horizontal Plane, Vertical Plane or Perpendicular Plane) is called Auxiliary Plane.

Often one of the six principal views does not completely describe an object. This is justifiable when there are inclined or oblique planes or features on an object. For these special cases, a special orthographic view called an auxiliary view is required to be created. 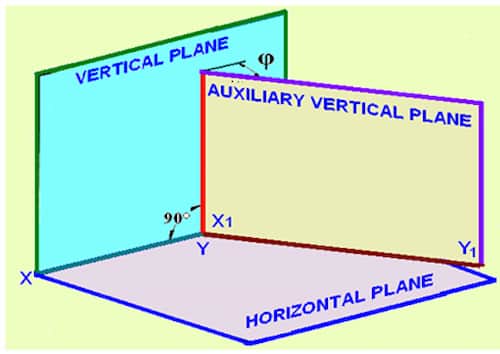 Types of Auxiliary Plane there are two types. Which is as follows.

Also, Read: Difference Between Sketching and Drawing | What Are Conceptual Sketches | Architecture Concept Drawing | Types of Drawings for Building Design 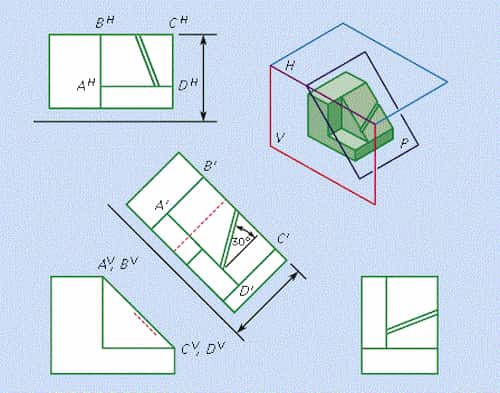 An auxiliary view is an orthographic view projected in such a way that the lines of sight aren’t parallel to the principal projection planes (Frontal, Horizontal, or Profile).

Simply, the view which is obtained on the auxiliary plane is an auxiliary view. There is an infinite range of potential auxiliary views of any given object.

Auxiliary Views are often used to show the True Size of Inclined Surfaces as in generally inclined surfaces does not show their true size using standard orthographic drawing procedure.

Normally the auxiliary plane is parallel to the inclined surface.

Method of Preparation of Auxiliary Views 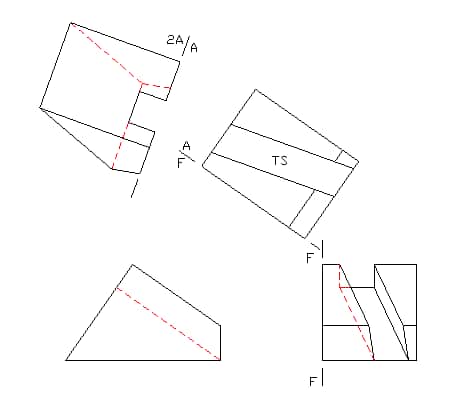 Orthographic projections are prepared before making ready auxiliary views. The view within which inclined lines show actual length, perpendiculars are erected there with the inclined lines to get the particular length.

The breadth and alternative details are collected from the opposite view. Generally, the detail of the inclined surface is given within the auxiliary view. The opposite components within the principal plane are unheeded.

There are two sorts of Unsymmetrical Auxiliary View: 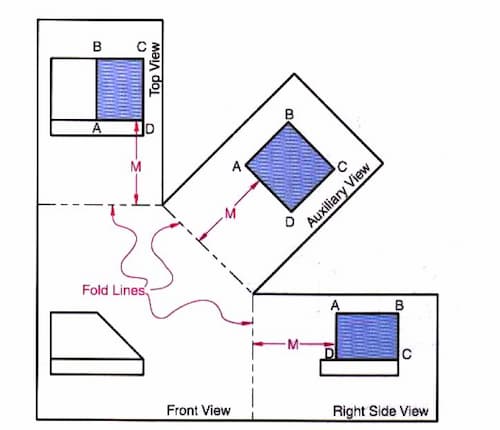 Types of Auxiliary View there are three types. Which is as follows.

Classification of Auxiliary View with respect to inclined lines is as follows:

How to Draw Auxiliary View?

To utilize an auxiliary view to indicate a surface’s true size (TS), a view should be drawn wherever that surface seems as a line.

It is more common to ascertain partial auxiliary views that show solely the TS options. Since most of the opposite surfaces are going to be foreshortened, a whole auxiliary view becomes strenuous to scan.

There are two ways of viewing an auxiliary view: 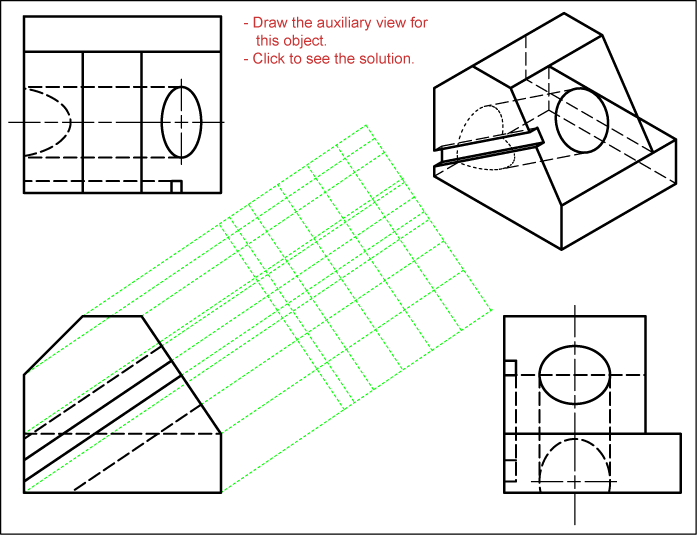 Step 1. Draw the given Orthographic View of the object.

Step 4. Draw the Projection Lines between the inclined surface and auxiliary plane.

Step 5. Examine the views that are supplied for an inclined surface.

Step 6 Locate the line which is considered as the edge view of the inclined plane.

Step 7. In the front view, draw light construction lines at right angles top the inclined surface. This is Line of Sight.

Step 8. Imagine the auxiliary plane as being attached by hinges to the front (vertical plane) from which it is developed.

Step 9. From all points labelled on the front view, draw projection lines at 90 Degree to the inclined surface (parallel to the line of sight).

Step 10. Construct a reference line collateral and equidistant to the edge view of the inclined surface.

Step 11. Transfer the Depth Dimension (In this case it is the Primary Reference to the Reference Line).

Step 12. Project the labelled points and join them in sequence to prepare the auxiliary view. The points used to identify the shape are for solving difficult problems on instructional purposes.

Why Are Auxiliary Views Used?

When making engineering drawings, it’s typically necessary to indicate options during a read wherever they seem true to size so they will be dimensioned.

The thing is generally positioned specified the most important surfaces and options are either parallel or perpendicular to the principal planes.

Views are commonly selected so most of the options are going to be visible within the 3 principal views. The front, top, and left or right facet views are most typically drawn.

Many objects are quite complicated, and therefore the three principal views might not best gift. During this case, one or additional auxiliary views generally are drawn.

What Is Auxiliary View?

An auxiliary view is simply a “helper” view, which shows the slanted part of the object as it actually is. It turns, or projects, the. object so that the true size and shape of the surf ace (or surfaces) are seen as they actually are. Auxiliary views are commonly found on many types of industrial drawings.

An auxiliary view is simply a “helper” view, which shows the slanted part of the object as it actually is. It turns, or projects, the. object so that the true size and shape of the surf ace (or surfaces) are seen as they actually are. Auxiliary views are commonly found on many types of industrial drawings.

Method of Preparation of Auxiliary Views

Orthographic projections are prepared before preparing auxiliary views. The view in which inclined lines show actual length, perpendiculars are erected there with the inclined lines to obtain the actual length. The breadth and other details are collected from the other view.

How to Draw Auxiliary View

To sketch an auxiliary view, you begin with orthographic. views of the object and add projection lines perpendicular (90◦) to the slanted surface, adding a reference line any convenient distance from the view with the slanted surface.

Hence the additional planes are set up so as to be parallel to the edges and faces which should be shown in true sizes.

An auxiliary view is simply a “helper” view, which shows the slanted part of the object as it actually is. It turns, or projects, the. object so that the true size and shape of the surf ace (or surfaces) are seen as they actually are.

When Is an Auxiliary View Neede?

What Is the Purpose of an Auxiliary View?

A third plane perpendicular to both coordinate planes, and hence to the ground line, is called a profile plane. This plane is vertical in position, and may be used as a plane of projection. Projections of a Line on Horizontal, Vertical, and Profile Planes.