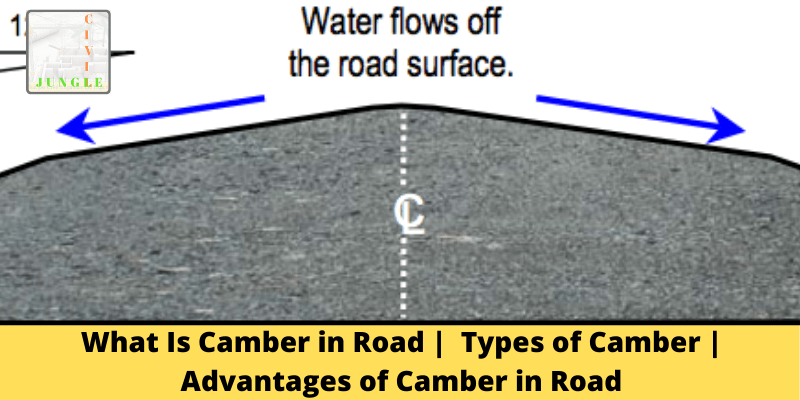 What Is Camber in Road?

It’s mostly found in the highways the median part of the road surface is elevated with regards to the edges. This slope from the diagonal direction is known as the Camber.

The purpose of the camber is to drain out the rainwater from the road surface around the edges.

The design values of cambers are primarily based on the type of pavement and also on the average amount of rainfall in the area. Steep cambers are useful for eliminating surface water.

But they’re not recommended since they will wear down the surface. Normally, cambers of slope 2 to 3% are arranged.

On straight sections of roads, they’re shoulders with higher cross fall relating to that of the carriageway by 0.5%.

Composite camber might be composed of partly parabola and partly straight line or two straight lines having different slopes.

Generally, the central part of the road is made parabolic and provided with straight slopes near edges. This helps to decrease in intensity of pressure by increasing the contact area of the wheel.

This type of camber is provided by meeting two straight surfaces in the crown. Crown is the central and top most point in the surface of the road.

The edge shape produces inconvenience to the traffic, so it isn’t used in general.

It consists of both straight lines steeper near the edges and flatters near the crown. This type of camber is considered to be the best for Indian roads.

It consists of a continuous curve, either parabolic or elliptical. This type of camber is preferred for roads used by fast-moving vehicles.

Also, read: Estimation for Building Works | Centre Line Method | Long and Short Wall or Out and in to in a method

Why Is Camber Provided In Road?

Advantages of Camber in Road

This prevents rainwater to accumulate at local shrinkages or depressions and forming water pools around the road surface that are disagreeable to the public as well as to the road structure.

Camber provides quick drainage of rainwater and so saves the foundation course of this road structure from weakening from the percolation of rainwater to it through the road surface.

Method of Providing Camber in Road

Normally, the camber is provided on the straight roads by raising the center of the carriageway with respect to these edges, forming a crown or highest point on the center-line.

At horizontal curves with superelevation, the surface drainage is effected by raising the outer edge of the pavement with respect to the inner edge while providing this desired superelevation.

The rate of camber or cross slope is generally designed by 1 in n, which means the transverse slope is at ratio 1 vertical to”n” horizontal. Camber can be expressed in percentage. If the camber is n%, the cross slope is n in 100.

Recommended Values of Camber in Road For Different Types of Road surface by IRC: