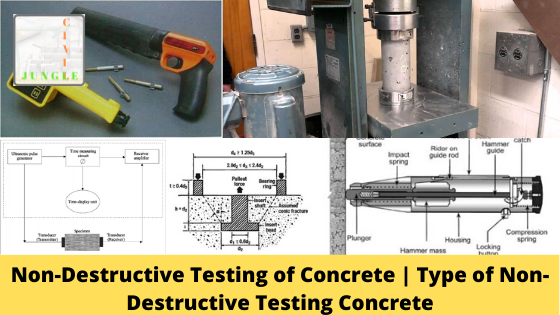 What Is Non-Destructive Testing of Concrete?

The standard method of assessing the quality of concrete in buildings or structures is to test cast samples simultaneously for compressive, flexural, and tensile strength.

Although there can be no direct measurement of this strength properties of structural concrete for the simple reason that determination of strength involves destructive stresses, several non-destructive assessment methods have been developed.

This depends on the fact that certain physical properties of concrete can be related to strength and can be measured by non-destructive methods. Such properties include hardness, resistance to projectile penetration, rebound ability, and the ability to transmit ultrasonic pulses and X and Y rays.

The following are different methods of Non-destructive testing in concrete: 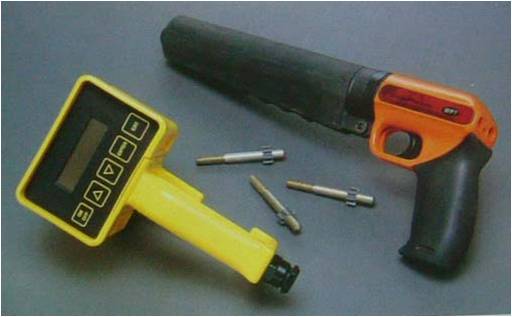 The Windsor probe is usually considered to be the best way of testing penetration.

The equipment consists of a gun or powder is driven, hardened alloy probes, loaded cartridges, a depth gauge to measure probe penetration, and other related equipment. 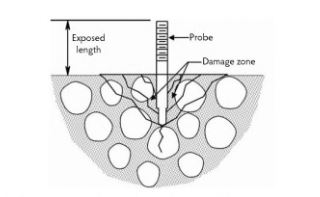 The penetration depth provides an indication of the compressive strength of the concrete.

Rebound Hammer strength test, being a non-destructive test, has its advantages of preserving the integrity of the sample.

Besides, the test is relatively simple, versatile, and economical compared to conventional crushing tests. 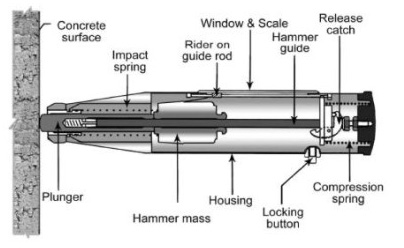 This method is widely used for testing concretes manufacturers of such rebound hammers usually provide calibrated curves showing this relation of compressive strength and rebound number concrete only.

But these hammers may conveniently be used to test stones and bricks also. This paper presents some models for the correlation between rebound number and compressive strength of bricks.

10 different samples of brick were collected from different manufacturers, and rebound numbers were taken 20 times for each brick, 10 times for horizontal hammer position, and 10 times for vertical.

These samples were then tested in a universal testing machine to obtain their actual compressive strength.

Regression coefficients for the proposed models were found to vary from 0.87 to 0.96.

The proposed linear model for horizontal hammer position was found to be the better one with a regression coefficient of 0.96, which indicates the acceptability of this model for predicting the compressive strength of bricks. 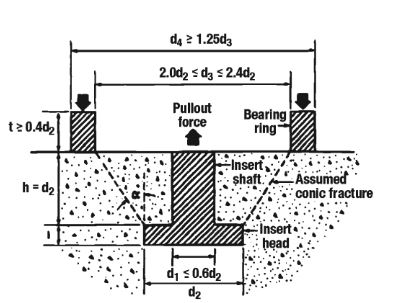 Pull-out test measures, using a special ram, the force required to pull a specially shaped steel rod in the concrete whose enlarged end was thrown to the concrete to a depth of 3 inches. (7.6 cm).

The concrete is simultaneously in tension and shear, but the force required to pull the concrete may be related to its compressive strength.

The extraction technique can thus quantitatively measure the in situ strength of the concrete when the appropriate correlations have been made.

It had been found, in a wide range of forces, that the tensile forces have a coefficient of variation comparable to that of compressive strength. 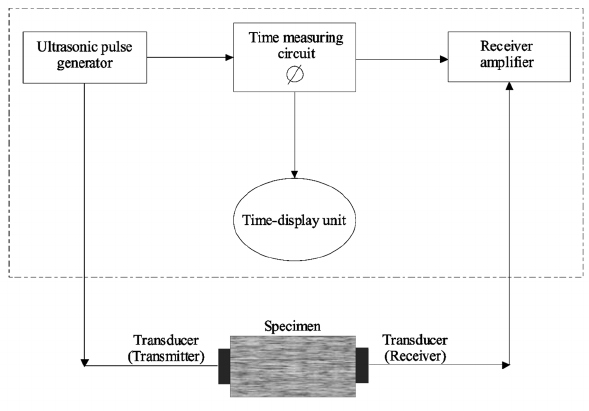 This instrument Portable ultrasonic testing equipment is available. The equipment is portable, simple to operate, and includes a rechargeable battery and charging unit.

Typically, pulse times of nearly 6500 OS can be measured with 0.1-OS resolution. The measured travel time is prominently displayed.

The instrument comes with a set of both transducers, one each for transmitting and receiving the ultrasonic pulse.

Transducers with frequencies of 20 to 100 kHz are usually used for testing of concrete.

These transducers primarily generate compressional waves at predominantly one frequency, with most of the wave energy directed along the axis normal to the transducer face.

It is relatively easy to conduct a pulse velocity test. It is important that the test is conducted such that the pulse velocity readings are reproducible and that they are affected only by the properties of concrete under test rather than by other factors.

The factors affecting the pulse velocity may be divided into two categories:

(I) Factors resulting directly from concrete properties; and

(II) Other factors. These influencing factors are discussed below:

This UPV method has been applied successfully in this laboratory as well as in the field. It is being used for quality control, as well as for the analysis of deterioration.

This applications of the pulse velocity method on a concrete structure are:

Also, read: Difference Between CPM and PERT/PERT Vs CPM | What Is CPM &#038; PERT 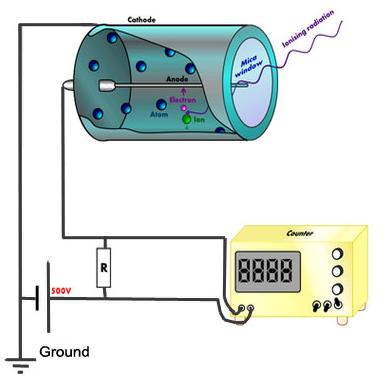 Radioactive concrete testing methods can be used to detect the location of the reinforcement, measure density, and perhaps establish whether honeycomb has occurred in structural concrete units.

Gamma radiography is increasingly accepted in England and Europe. The equipment is quite simple, and the operating costs are small, even though the original cost can be high.

Concrete up to 45 cm thick can be examined without difficulty.

Hardness scales are defined steps of the resistance of a material to indentation under dynamic or static load or resistance to scratch, abrasion, wear, drilling, or cutting.

Concrete test hammers evaluate surface hardness as a function of resiliency, i.e the capability of a hammer to rebound or spring back.

The interpretation of this pulse velocity measurements in concrete is complicated by the heterogeneous nature of the material.

The wave velocity isn’t determined directly but is calculated by the time taken by a pulse to travel a measured distance. 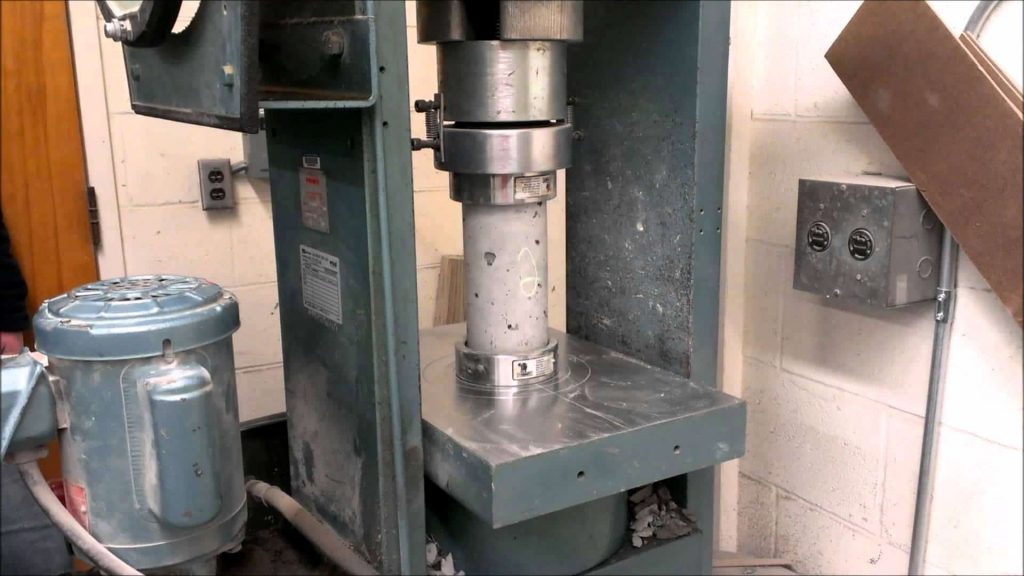 Cores are cut with a drill using a hollow barrel tipped with industrial diamonds. The entire rig has to be firmly fixed in position by weights, anchor bolts, vacuum pads or bracing against other parts of the structure.

The preferred core diameter for strength testing isn’t defined in BS EN 12504-1, BS EN 13791 or BS 6089 however the diameter should be at least 3.5 x the maximum aggregate size.

Sometimes even smaller diameter cores have to be used for strength testing. In this case, the strength results could be variable and a greater number of cores must be extracted.

When cores are received in the laboratory they might be examined for degree of compaction, cracks, voids, honeycombing and the presence of reinforcement.

Before testing cores for strength, they have to be trimmed to length and the ends prepared so they’re flat and perpendicular to the longitudinal axis.

This is achieved by grinding or, more typically, capping with high alumina cement (calcium aluminate cement) mortar or a sulfur/sand mixture. Cores should be tested in a dry state.

This is an air dry, not oven dry. If tested wet a small positive correction to the strength is made

Also, read: WPC Board | Features of WPC Board | Disadvantages of the WPC board | Usw of WPC

Purpose of Non-Destructive Tests on Concrete

A variety of non-destructive testing (NDT) methods have been developed or are under development to investigate and evaluate concrete structures.

These methods aim to estimate the strength and other properties, corrosion monitoring and evaluation; measure cracks size and coverage; evaluate the quality of the grout; detect defects and identify relatively more vulnerable areas in concrete structures.

Many NDT methods used for concrete testing originate from testing a more homogeneous metal system. These methods have a solid scientific basis, but the heterogeneity of the concrete makes it difficult to interpret the results.

There may be many parameters, such as materials, mix, labor, and environment, that influence the measurement results.

Nondestructive testing (NDT) is the process of inspecting, testing, or evaluating materials, components or assemblies for discontinuities, or differences in characteristics without destroying the serviceability of the part or system. In other words, when the inspection or test is completed the part can still be used.

Which NDT Method Is Best?

While many methods of nondestructive testing can detect failure-predictive flaws in welds, the most efficient, effective method is phased array ultrasonic testing.

Ultrasonic testing (UT) is a non-destructive test method that utilizes sound waves to detect cracks and defects in parts and materials. It can also be used to determine a material’s thickness, such as measuring the wall thickness of a pipe.

How Does Ultrasonic Test Work?

Ultrasonic inspection uses a piezoelectrictransducer connected to a flaw detector, which in its most basic form is a pulser-receiver and oscilloscope display. The transducer is passed over the object being inspected, which is typically coupled to the test object by gel, oil or water.

What Is Ultrasonic Method?

Ultrasonic methods of NDT use beams of mechanical waves (vibrations) of short wavelength and high-frequency, transmitted from a small probe and detected by the same or other probes. Such mechanical waves can travel large distances in fine-grain metal, in the form of a divergent wave with progressive attenuation.

Where Is Ultrasonic Testing Used?

In industrial applications, ultrasonic testing is widely used on metals, plastics, composites, and ceramics. The only common engineering materials that are not suitable for ultrasonic testing with conventional equipment are wood and paper products.