The gantry girders are girders which supports the loads that are transmitted through the travelling wheels of the crane.

The crane girder spans from column to column, this usually do not have any lateral support at the intermediate points excepting when a walkway is formed at the top of the girder.

Overhead traveling cranes are used in industrial buildings to lift and transport heavy jobs, machines, and so on, from one place to another.

A typical arrangement of a crane system is shown below. Usually, the crane consists of a bridge made up of two truss girders. The bridge is termed a crane bridge, crane girder, or crab girder. It spans the bay of the shop and moves in a longitudinal direction.

To facilitate movement, wheels are attached to the ends of crane girders. These wheels move over rails placed centrally over the girders which are called gantry or crane gantry girders.

These girders are designed as laterally unsupported beams until the compression flange is laterally supported by either a catwalk or by an additional member. Show below fig. the front view and top view of the typical arrangement of a crane girder, gantry girder, and column in a workshop. 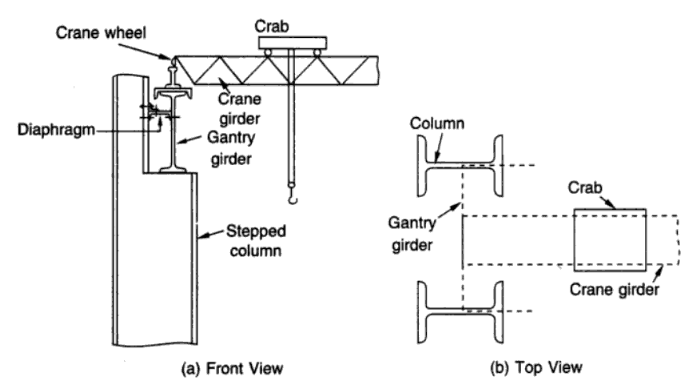 A trolley (crab) with wheels and a suspended hook is placed over the crane bridge and this arrangement can move in the transverse direction.

However, it should be noted that the two movements of the crane, the longitudinal and the transverse cannot be had simultaneously. Bolted clamps or hook bolts are, used to keep the rails in position.

The gantry girders, because of the necessary clearances, must be placed a distance away from the face of columns. A direct connection with the column, therefore, is impossible.

Because of lateral loads, however, some types of connection is mandatory. This is provided by diaphragm as shown in Fig.2 (a).

In gantry girders, even when deflection is held within limits, there is some rotation at the ends under moving crane.

Accordingly, some provision for longitudinal movement of the top flange at the ends must be made. This is usually taken care of by using bolts with slotted holes (Fig. 2(a), Fig 5.).

Some of the types of sections used for gantry girders are shown in Fig. 3,4,5,6 . An I-Section is provided for a manually operated overhead crane (Fig. 3).

The top flange of the I-section is reinforced with a channel with its flanges turned down on the compression flange (Fig. 4) or a channel and a bracket plate are attached to the web of the I-section (Fig. 5) to increase the lateral resistance against the horizontal surge from electrically operated overhead traveling cranes as well as torsional rigidity.

If required, still heavier sections as shown in Fig. 6, may be provided.

Gantry girders are unique in themselves. First, it is different from the usual beams in buildings. It is laterally unsupported except at the columns.

Second, it is one of the very few girders in the buildings that are subjected to impact. Third, it must be analyzed for unsymmetrical bending because of lateral thrust from the starting and stopping of crab.

Fourth, it is subjected to longitudinal load due to starting and stopping of the crane bridge itself; and the fifth, these are always simply supported. These are subjected to the forces as follows. 3. The lateral thrust, due to starting/stopping of the crab acting horizontally, normal to the gantry girder.

Types of Load on Gantry Girder:

To calculate the reaction the maximum wheel load is computed. It occurs when the crab is nearest to the gantry girder. In addition to the reaction from a crane girder, the self-weight of the rail should also be considered.

Lateral forces on crane girders may be induced by the,

2.1. Thrust due to the sudden stopping of the crab and load when traversing the crab girders.

Longitudinal loads are caused due to the stopping or starting of the crane girders and produce a thrust along the rails.

The largest of these, especially in quick-acting electric overhead traveling cranes, is due to the sudden application of the brakes.

The frictional resistance to the sliding of the locked wheels upon the rails is supplied by the crane girder. This element in turn distributes it amongst all the crane column shafts.

The lateral and longitudinal thrusts are transferred at the rail level. Therefore, gantry girders are also subjected to bending moments due to these loads.

Also, read: Classification of Stone Work | What Is Stone Masonry

The stresses produced in gantry girders due to the above loads are more than those caused by gradually applied loads.

This is due to the forces set up by the sudden application of brakes to the rapidly moving loaded cranes acceleration, retardation, vibration, possible slip of slings, etc.

With quick-acting electric overhead traveling (E.O.T) cranes, the stresses in the gantry girders are produced almost instantaneously, whereas with slow-moving hand-operated cranes, the bending stresses in the girder are induced gradually from zero up to their maximum values, as the cranes traverse the girder from the end towards the center.

To account for this, suitable impact factors are introduced as and when applicable. As per I.S: 875-1964, additional loads as listed in the above table should be considered when structures are subjected to impact loads in addition to live loads.

The gantry girders are girders which supports the loads that are transmitted through the traveling wheels of the crane. The crane girder spans from column to column, this usually does not have any lateral support at the intermediate points excepting when a walkway is formed at the top of the girder.

Stiffeners are secondary plates or sections which are attached to beam webs or flanges to stiffen them against out-of-plane deformations. Deep beams sometimes also have longitudinal web stiffeners. Flange stiffeners may be used on large span box girder bridges but are unlikely to be encountered elsewhere.