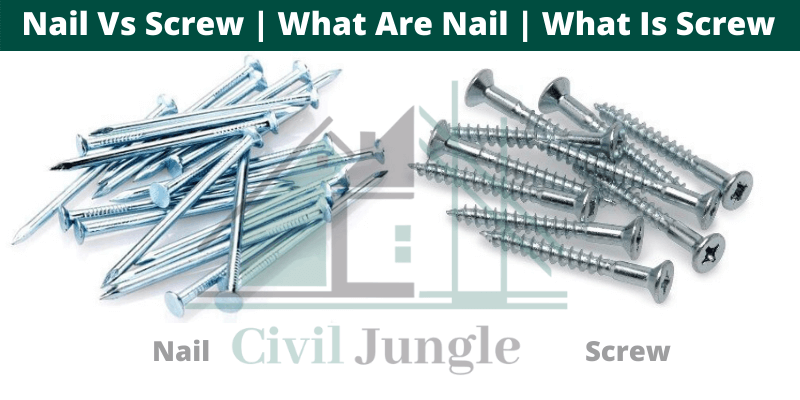 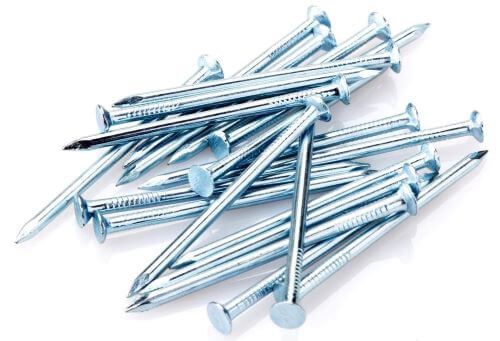 Nail is the most common fasteners used in construction. Up to the end of the Colonial period, all nail used in the United States were handmade.

They were forged on an anvil from nail rods, which were sold in bundles.

These nail rods were prepared either by rolling iron into small bars of the required thickness or by the much more common practice of cutting plate iron into strips by means of rolling shears.

Nail is available in a wide range of sizes, materials, and shapes, geared to a particular use or purpose Fastening with nail is the fastest and easiest way to connect wood members, requiring no predrilling or preparation, as they are driven into wood members with a hammer or a pneumatic gun.

Nail is most often made of mild steel but is available in a variety of other metals such as aluminium, copper, zinc, brass, or stainless steel. 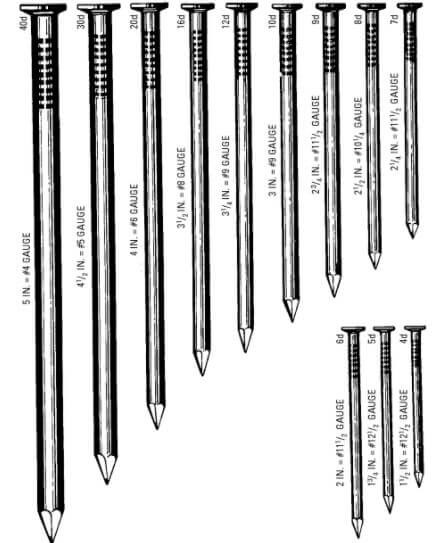 While the rest of the world measures a nail’s diameter and length in millimetres. in the U.S. they are measured in a term called pennies and designated as d.

Common nail has flat heads are used in most construction framing and are not intended to be exposed to the environment.

A galvanized nail has a protective zinc coating on them to inhibit rust and corrosion. Finish nail is not meant to be seen; they have a tiny head and are used in finish woodwork such as casework and interior detailing.

Other types of the nail are box nail, casing nail, brad nail, roofing nail, cut nail, and concrete nail, each shaped differently in terms of its head, shaft, and point, to suit their particular use.

Also, read: Bolt Vs Screw | What Is Bolt | What Is Screws 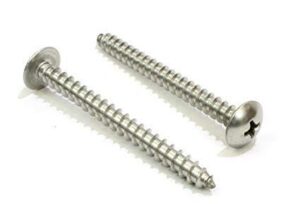 A screw may be defined as an inclined plane wrapped around a nail and characterized by a helical ridge.

In other words, it is a long metal shaft with threads circling along its length. It also has a turning where a screwdriver can be used to rotate the screw.

A screw generally has a head with a specially formed shape. The shape determines and heads size the size of the tool to be used to turn or drive the screw. Commonly used tools are wrenches and screwdrivers.

The underside part of the head is a shank that can be fully or partially threaded. A screw thread is a structure on a coned or cylindrical shape in the form of a helix.

Screws are tightened by rotating the tool anticlockwise or clockwise and are usually used for joining materials that don’t have existing holes in them.

The most common types of screws used in manufacturing are drywall screws, dowel screws, mirror screws, and concrete screws.

The strength of a screw relies on the width of the thread and the distance between them. However, the more numbers of the threads, the more rotations would be required to attach the screw.

Also, if the continuous distance thread is wider, more force must be exerted on the tool in the rotations.

Screws are widely used in many applications. From motorcycles to furniture, from air conditioners to kid’s remote control cars.

Also, read: Difference Between CPM and PERT | What Is CPM & PERT

Difference Between Nails And Screws

When deciding between nails and screws, keep in mind that nails are less brittle, so they provide greater shear strength. Screws, on the other hand, may not be as forgiving, but their threaded shafts hold better in wood and draw boards together much more tightly and they have greater tensile strength.

What Is Difference Between Nail and Screw?

While they may sometimes look similar, these standard or custom fasteners are definitely not the same. Essentially, screws offer more resistance to breaking under tension, while nails have better resistance to motion.