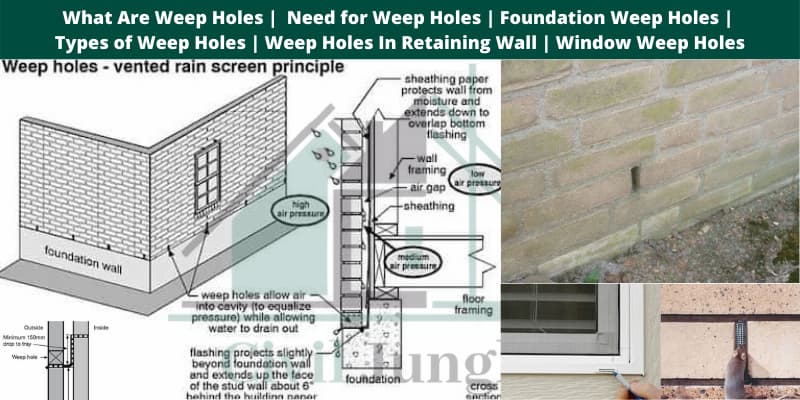 What Are Weep Holes? 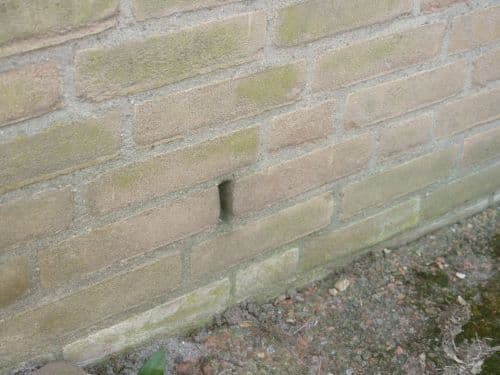 Weep holes are the small opening which is in a circular or rectangular shape to escape rainwater from the building. Weep holes help to reduce the buoyancy and uplift on the structure and make it structurally strong and stable. The weep holes should be sized properly to overcome the surface tension.

The weep holes are generally provided by using sand drains which will help in the proper functioning of the Weep holes. The number of peoples which is provided in the structure depends upon the size and the length of the structure and height of the water table in that area. 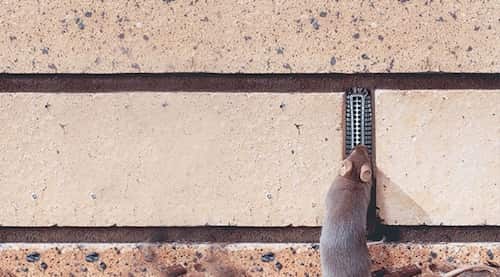 When the structure is constructed above the water table then there will be no chance of accumulation of water behind the wall. In this case, there is no need for the provision of weep holes.

But if the structure is constructed below the water table then there will be extra pressure of water will be developed on the structure and it is necessary to provide weep holes to pass water through it.

The weep holes are the small openings that are provided mostly in the retaining walls, wing walls, external brick walls, underpasses, Bridge to remove the hydrostatic pressure which is developed.

Weep hole is the small opening provided in the structure to drain off the rainwater through it and reduce the hydrostatic pressure on the structure and prevent it from Structural damage.

The height at which the weep holes are provided depends upon the maximum height of the water accumulation of the groundwater table in that area.

Where Should Be Weep Holes Provide? 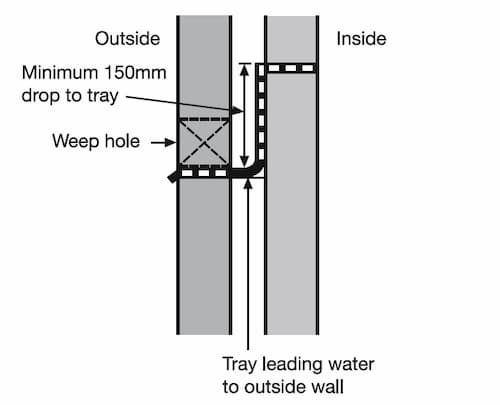 According to the principle of gravity, the water escapes from the lowest point of the structure. That’s why the weep holes are always provided at the bottom of the retaining walls for the masonry walls.

Weep holes are also provided above the door and below the windows. Weep holes that are provided in the brick masonry walls also helpful in the ventilation to allow air to the back of the wall. 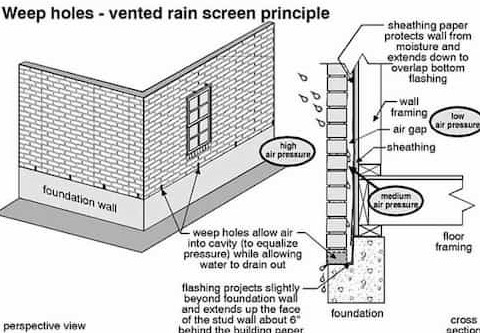 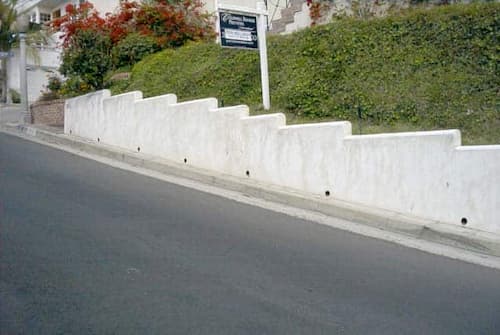 When the retaining wall is constructed below the water table when the unit weight of the soil will be considered as the submerged weight of soil. In this case, it is necessary to provide weep holes in the retaining walls which will help to reduce the hydrostatic pressure on the walls.

A weep hole is a passage for water to escape a building envelope. Weep holes serve an important purpose of a home; they allow the home to “breathe” as some say. Since there are many chances for water to enter the home, weep holes allow for water exit.

In building construction, weeps are typically found in a masonry veneer or cavity wall, just above the flashing. The cavity serves as a way to drain this water back out through the weep holes. The weep holes allow wind to create an air stream through the cavity.

Weep Holes are provided in earth retaining structures like retaining walls, underpasses, wing walls and other below ground drainage structures. From engineering point of view, Weep Hole is provided in these structures to relieve hydrostatic pressure or water pressure on the walls.

They are small holes located on the bottom edge of storm-window frames, weep holes are drains for your windows. If they become blocked by debris, paint or caulk and can’t serve this vital function, water can seep into the wood of the sill and cause it to rot.

Shower pans and tubs sometimes have a lip built into the flange that collects water, like a small gutter. The lip will have an opening at corners and/or ends to drain the water out and into the tub. When the weep openings are caulked over, the water cannot get out, so it collects and rots the inside of the wall.

Clearing clogged weep holes is the simplest, lowest-cost fix for window leaks. Remove fallen leaves, twigs, insect corpses and other objects that may be blocking these openings. Then clean the holes out with a cotton swab or bit of wire (the slow way) or a spritz of compressed air (the shortcut).

The cotton wick, which became popular in the late 1980s, is nothing more than a 3/8-inch thick cotton rope cut into sections on-site and laid into the cavity, then extended through a head joint to the outside of the veneer.

Tubes weep holes are formed by using hollow plastic or metal tubes. They are spaced around 16 inches apart. This tubes are placed at a slight angle to allow water egress. It must be made sure that the angle is not too steep or too flat.

A weep hole is a passage for water to escape a building envelope. Weep holes serve an important purpose of a home; they allow the home to “breathe” as some say. Since there are many chances for water to enter the home, weep holes allow for water exit.

Weep holes are necessary because the vinyl sill is the same shape as the window jambs, so that the tracks holding the window sash collect and contain water when they function as the sill in the lower horizontal frame position. Without weep holes, this water could not drain.

Why Do Some Windows Have Weep Holes?

Weep holes are openings built into the bottom of your metal or vinyl window frames, which are designed to drain off precipitation that collects in the window tracks. Clear weep holes are able do their job properly and won’t let the tracks overflow in heavy rain.

What Happens If Weep Holes Are Clogged?

If the weep holes are blocked, the water builds up and is forced into the walls and flooring in a two-story home, you may have damage to the first-floor ceiling. At the bottom of the pan there are three weep holes in the metal drain.

Weep holes are installed during the initial construction process when the courses of masonry over the foundation are being put down. The weep holes are placed above grade, usually between 3 to 5 inches. This holes are made by leaving open cracks unfilled with masonry cement. Some masons use tubes surrounded by mortar.

Do All Shower Drains Have Weep Holes?

Most outside shower drains don’t have weep holes because they are not necessary. The drain is usually built into a concrete floor. There is no issue of water accumulation in the grout, so you don’t have to worry about something like weep holes. They would get blocked soon anyway.

Weep holes are drilled in the concrete blocks at the lowest level. Once the block has been drilled, water exits at the holes and flows directly into the drainage system. Weep holes have the added benefit of helping alleviate pressure on your foundation walls.

A weep, a weep hole, or a weep-brick is a small opening that allows water to drain from within an assembly. Weeps are located at the bottom of the object to allow for drainage; the weep hole must be sized adequately to overcome surface tension.

If your foundation is made of concrete masonry units (otherwise known as CMU blocks, cinder blocks or concrete blocks), that’s when you’ll want to have weep holes in your waterproofing system. All this pressure can eventually cause water to leak into your basement and damage your foundation.

A basement weep hole is a small opening that will allow water to drain directly into your basement waterproofing system.

Can Water Come in Through Weep Holes?

This research demonstrated that even under truly extraordinary conditions water rarely enters the weephole and even if it does it cannot be blown high enough up in the cavity to create internal damp problems. To understand why, it’s important to look at the details of a correctly constructed cavity wall.

Weep holes are installed during the initial construction process when the courses of masonry over the foundation are being put down. The weep holes are placed above grade, usually between 3 to 5 inches. This holes are made by leaving open cracks unfilled with masonry cement. Some masons use tubes surrounded by mortar.

Is It Ok to Cover Weep Holes?

Whatever you do, do not fill those weep holes. They’re an integral part of the drainage system to keep water from building up behind the brick. If allowed to contact any untreated lumber, this water will cause serious wood rot, mold and, eventually, structural problems with your home.

Badness happens when your walls don’t have weep holes. Without weep holes, water has only one place to go – inside your home’s walls, leading to mold, rot, and unpleasant, expensive structural issues.

Check weep holes at least once a year, before the rainiest season. If they’re clogged, open them up with a brush, a screwdriver or a toothpick. Clear away leaves, twigs and dirt that accumulate on the windowsill.

Weep holes are a vital part of your shower drain assembly. Typically, there are three such holes in the upper portion of the drain assembly, spaced evenly around the drain. The weep holes are small holes that connect to the main drain, allowing water that enters them to feed into the drainpipe.

What Is the Purpose of a Weep Hole?

The Masonry Design Manual describes weep holes as, ‘Openings placed in mortar joints of facing materials at the level of flashing, to permit the escape of moisture, or openings in retaining walls to permit water to escape.

Weep holes in vinyl windows allow water to drain out of the sill. Weep hole covers have one-way vents that prevent drafts and dirt from entering the home while still letting the water escape, as well as making the window more aesthetically pleasing.

Where Do You Put Weep Vents?

Weep holes are typically found in the outer masonry leaf of cavity walls, just above the flashing. They can also be found above windows, doors or other penetrations. They should be provided at regular intervals so as to allow any moisture collected by cavity trays to escape.