A compression member, i.e., column, is an important element of every reinforced concrete structure. These are used to transfer a load of superstructure to the foundation safely. Mainly columns, struts, and pedestals are used as compression members in buildings, bridges, supporting systems of tanks, factories, and many more such structures.

The compression member who is inclined or horizontal and is subjected to axial loads is called Strut. Struts are used in trusses. The function of columns is to transfer the load of the structure vertically downwards to transfer it to a foundation. Apart from the wall performs the following functions also:

(a) It encloses building areas into different compartments and provides privacy.

(b) It provides safety from burglary and insects.

(c) It keeps the building warm in cools in summer and winter.

What Is Column End Conditions?

How much load a column can bear also depends on column end conditions. The column with fixed end conditions at both ends will be stronger, then the second column of the same size, length, and material but having both ends free.

In this condition, both ends of the column are either pinned, pivoted, or rounded. As shown in the figure below.

Column load-bearing capacity increases with the decrease in column equivalent length. This is the strongest column end condition. Both ends fixed column carries the maximum load, and effective length for this condition is considered as half of the total column length. As shown in the figure below.

Also, read: What Is Plaster | Type of Plaster | Defects In Plastering

#3. One End Fixed and Other Hinged-

In this condition, one end of a column is stronger, while the other end is very weak. The equivalent length for this end is as follows.

This end condition makes columns to bear the smallest load than all other end conditions. The column in such a condition is very weak. Equivalent length for one end fixed and other free is as follows.

What Are Effective Lengths of Columns?

The critical loads for columns with various support conditions can be related to the critical load of a pained-end column through the concept of an effective length. To demonstrate this idea, consider the deflected shape of a column fixed at the base and free at the top as below fig. 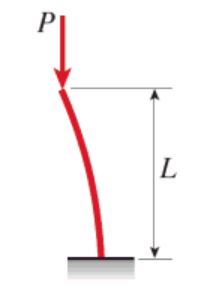 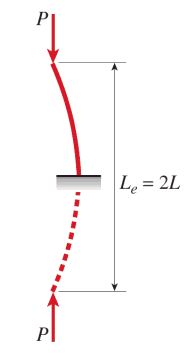 Thus, for a fixed-free column, the effective length is Le = 2L.

Because the effective length is the length of an equivalent pinned-end column, we can write a general formula for critical loads as follows:

If we know the effective length of a column (no matter how complex the end conditions may be), we can substitute into the preceding equation and determine the critical load.

For instance, in the case of a fixed-free column, we can substitute Le = 2L and obtain.

The effective length is often expressed in terms of an effective-length factor K: Le = KL

Where L is the actual length of the column. Thus, the critical load is

The factor K equals 2 for a column fixed at the base and free at the top and equals 1 for a pinned-end column.

The effective- length factor is often included in design formulas for columns.