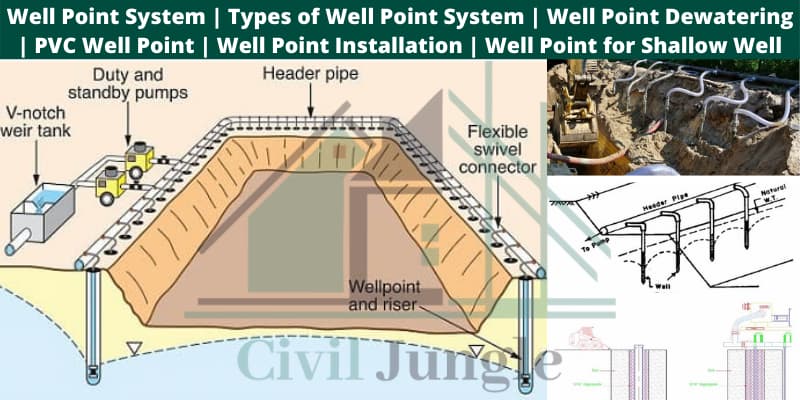 What Do You Mean by Term Well Point?

Parts consisting in a Well Point are a shallow shaft, a dewatering pump to draw water, a riser pipe that connects the Well Point to the surface, and a small well that fills up.

The diameter of a riser pipe is around 38 to 50 mm. It has slots or openings at the bottom that enables water to be drawn up using the pump.

The size of the slots or openings in the riser pipe is determined by the relative grain size of the material used for the water-bearing formation. 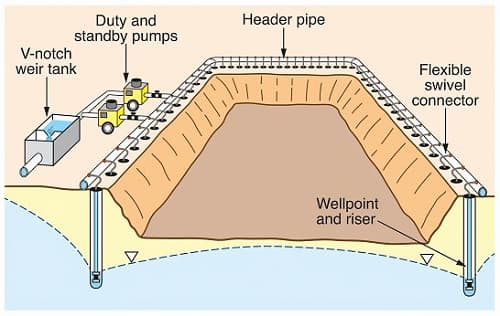 The opening in the riser pipe should be large enough to allow water to enter the tube, but it should be small enough to keep the water-bearing formation in place. The riser pipe of a Well Point is often connected through a flexbow to a common header main pipe.

The flexbow incorporated in the riser pipe acts as an adjustable valve which serves two purposes, firstly it controls the flow of water and air entering the Well Point system, and secondly it allows others to have a clear view of what is being pimped.

The common header main pipe of the riser pipe is then connected to the well point dewatering system. Well Points are very versatile and it can be used for a wide range of applications like shallow foundation and trench works.

Well Point may be installed in parallel for particularly long pipeline trenches with the help of special trenching machines. Well Point can be used for irrigation purpose of small to medium size fields like residential gardens.

If sufficient water is not yielded from one well for running the irrigating system them a second well point can be installed and connected with the first one which will help them function as one system.

As an alternative for boreholes Well Point can also be used around the perimeter of excavations, which will act as a means of lowering and controlling groundwater levels.

Well Point is more cost and time-efficient than a borehole in cases where shallower depth is required. A Well Point can be installed very quickly in an appropriate ground condition.

While the installation process of Well Point traditional drilling techniques such as jetting or auguring is typically used. Large quantities of water cannot be yielded from Well Point, typically we can get around 5 gallons of water per minute.

There is also a general limit of 5 to 6 m in height over which water can be drawn in Well Point as the vacuum is limited in practice to 0 bars. The second set of Well Point can be installed at a lower level for the requirement of greater depts.

Well Points are capable of dealing with water from very low flows in silty sands as well as from large flows in coarse sands and gravel.

What Is Well Point System? 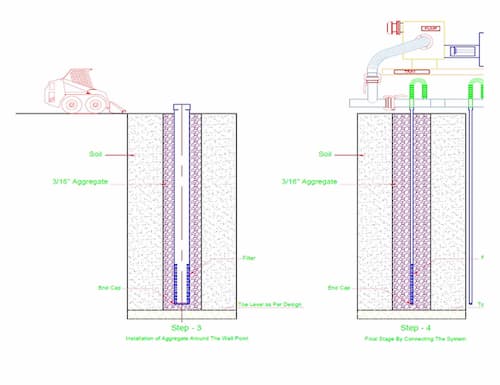 Well Point system can be used to lower the groundwater levels of an excavation site in order to provide stable working conditions. Well Point system is mainly suited for a shallow foundation, trench work and dewatering utility.

A Well Point system consists of several closely spaced shallow wells of small diameter. The components of a Well Point are connected to common header main pipe and water is pumped with a high-efficiency vacuum dewatering pump.

Further stages of Well Point system are required for drawdown when it exceeds 15 feet and installed at successively lower levels as excavation proceeds.

There are mainly two types of Well Point system which are 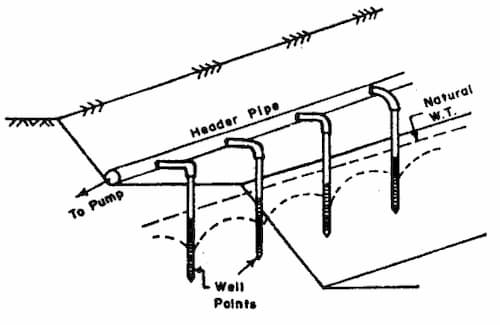 In a single Well Point system the well point consists of a pipe about 1 m long and 50 mm in diameter. In order to prevent clogging of the pipe, the perforations are covered with a screen.

Then the pumping unit is connected to the header pipe. The spaces between well points are 0.6 to 1.5 m. Water is jetted through the riser pipes in the downward direction during the installation of well point at the required depth.

Till the excavation work is complete the installed pump work continuously to regulate the water level. 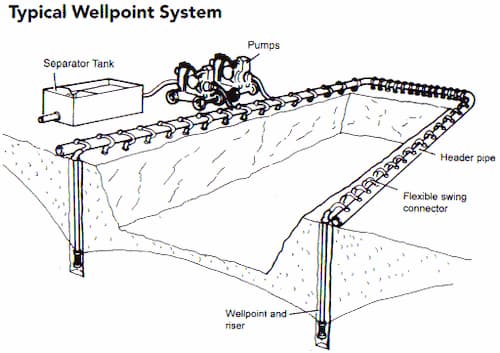 At the first installation stage, the well point is installed at a depth of around 4.5 m and put into action till the water table is lowered by about 4.5 m.

Then the surrounding area is excavated up to the depth of 4.5 m. Then in the second installation stage well points are installed in the area which is already excavated.

In this stage the water table is furthered lower by another 4.5 m.

The flexbow which is incorporated in the header pipe acts as an adjustable push-fit valve which allows the control of water and air entering the well point system. This is known as trimming and it gives a clear view of what is being pumped.

The header pipe of the well point system is connected to the well point dewatering pump, which pumps the water and discharges it to the designated point. 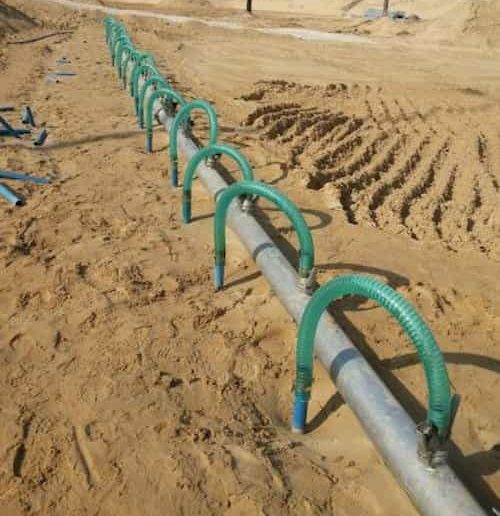 PVC well points are economical well points which are used when a jet rod or punch casing reused in a well point system. The well point riser can be pulled and reused because an inside slip coupling is used.

In order to create a well point screen which allows maximum water flow with minimum passage of fine material, precision slotting of PVC plastic pipes is used. This PVC plastic screen is self-cleaned by reverse flushing during jetting.

The PVC well point screen totally eliminates clogging due to corrosion or deterioration by electrolytic action. Maximum drawdown can be achieved by using an optional inner tube. 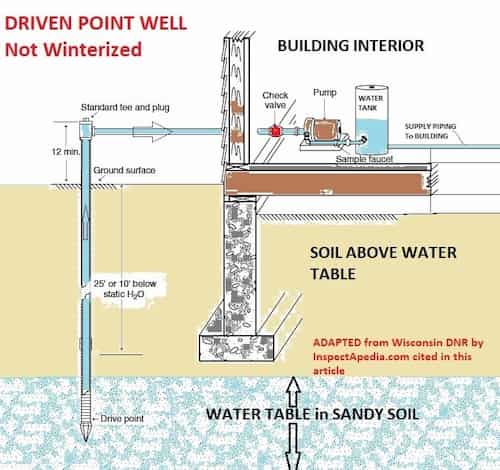 High pressure jetting pumps are used in the installation process of self jetting well points and placing tubes that are used in disposable well points.

The jetting pump most commonly used in well point system supplies water via the jetting hoses at a rate of about 20 L/s and at a pressure of 6 to 8 bar.

A standard 63 mm fire hose is usually connected to the flexible jetting hoses with instantaneous male and female connectors. For heavy-duty uses like hole puncher and pile jetting, other more powerful jetting pumps and hoses are often used.

In good condition water can be drawn from the maximum depth of 25 inches in a shallow well. The well point that is used in a shallow well is generally not used for a good source of potable water.

A shallow well is often exposed to hazards like pollution from fertilizers and animal wastes and sometimes becomes dry wells. If a well point is to be used for a source of potable water, one should refer to their applicable local well and plumbing codes.

To ensure if the water is safe for drinking, regular testing should be necessary.

At the following construction or project sites well point system can be adopted,

Followings are some cons of well point system:

A Well Point is a piece of pipe that has openings large enough to allow water to enter but also small enough to keep the water-bearing formation in place. The well point is then drove into the ground, passing the soil and clay until it has reached water bearing gravel and sand.

Well points are installed using conventional jetting methods, which involve pumping water at high pressure (supplied by a jetting pump and/or compressed air) through a steel placing tube suspended by a 360° excavator. If self-jetting well points are used, high-pressure water is pumped directly down the riser.

In good conditions, the maximum depth to draw water in a shallow well application is 25′. The use of well points in a shallow well is generally not a good source for potable water. Shallow wells are more exposed to pollution from fertilizer, animal waste and dry wells.

A wellpoint system consists essentially of a series of closely spaced small diameter water abstraction points connected, via a manifold, to the suction side of a suitable pump. The wellpoint technique is the pumping system most often used for modest depth excavations, especially for trenching excavations.