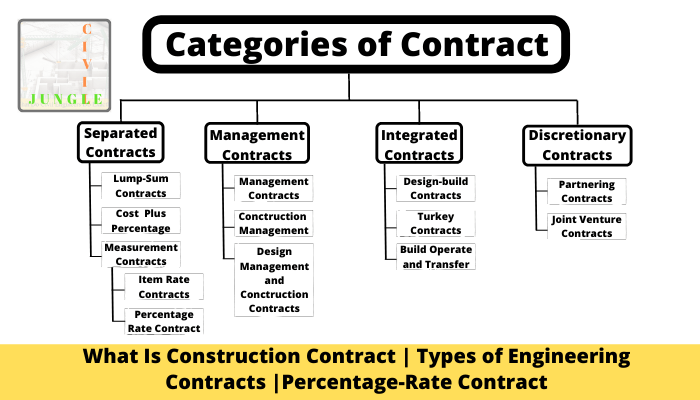 What Is Construction Contract?

Contract as per the Indian Contract Act 1872 means’agreements that are enforceable as such having been made with the free consent of the parties, by persons competent to contract for a lawful consideration and lawful object and which are not expressly declared to be void by any statute.’ In the definition, we could infer the criteria required for a contract to be valid.

Note: The turnkey tender documents may be having only the preliminary drawing may not have the bill of quantities 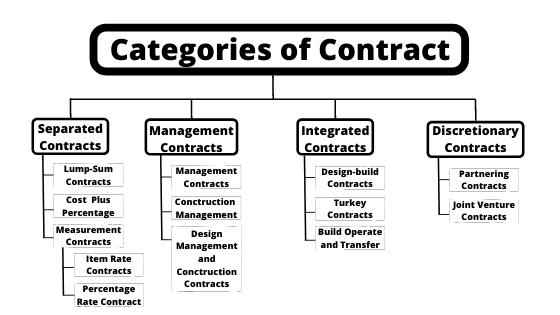 Following are the different types of engineering contracts:

Nature of Agreement In case of a lump-sum contract, the contractor agrees to carry out the entire work as shown in the drawings and described by specifications, by supplying labour and materials, all for a specified lump-sump.

Sometimes, the agreement makes a provision for adjusting the “fixed sum,” allowing for the cost of extras, variations, omissions, etc. 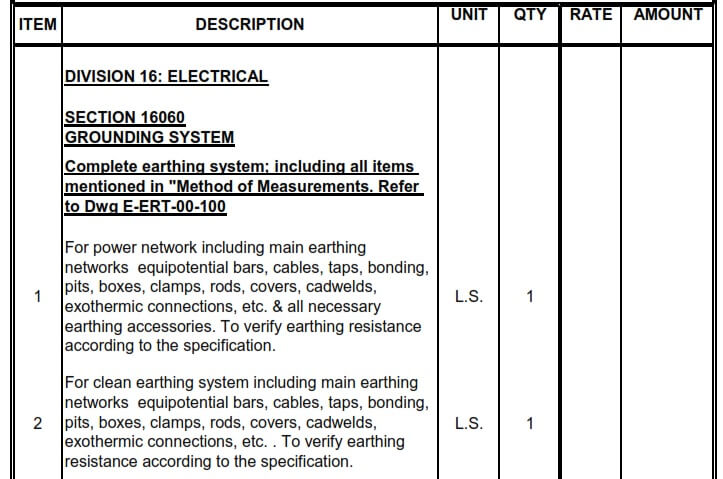 The major feature of the agreement is that the contractor agrees to accomplish all his/her contractual obligations and responsibilities for the stipulated payment, no matter what trouble or expense he/she comes across or incurs in doing so.

All the documents, except the “bill of quantities,” form the basis of the agreement. A schedule of rates is sometimes included to work out the cost of extras or omissions.

Nature of Agreement An item-rate contract is one in which the contractor agrees to carry out the work as per the drawings, bills of quantities, and specifications in consideration of a payment to be made entirely on measurements taken as the work proceeds, and at the unit-prices tendered by the contractor in the bill of quantities. 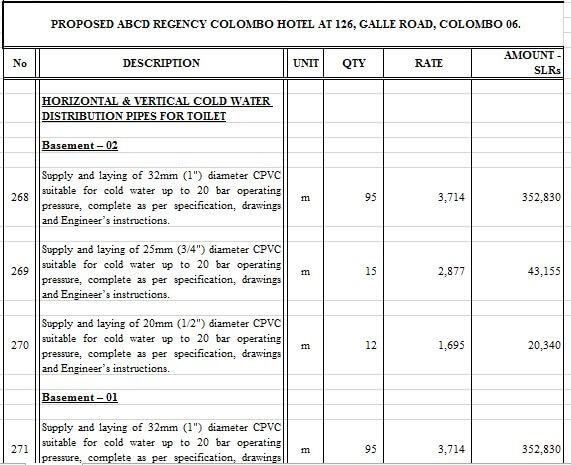 The basis of the agreement is thus the unit rate of each item, certain practical and reason-able variations in the quantities being accepted by both parties.

All the documents are invariably included in the agreement.

The bill of quantities includes an item of cement concrete, and the estimated quantity is 11,000 m3.

The contractor’s tendered rate represents the amount that he/she is to be paid for each cubic meter of concrete in the finished work,

Also, read: What Is FSI | What Is FAR | What Is Premium FSI | FSI Full Form | FAR Full Form

In this form of the contract, the department draws up the schedule of items according to the description of items sanctioned in the estimate with the quantities, units, rates, and amounts shown therein. When a department fixes the rate of item it is known as “Item Rate Contract”.

The bills of quantities supplied to all the intending bidders include, in addition to the approximate quantities and detailed description, the unit rates as estimated by the engineer. 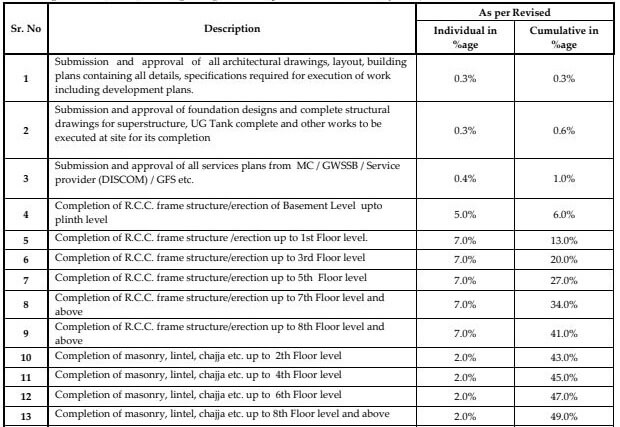 While tendering, the contractors do not have to write the rate or estimated cost of each item, but a percentage figure by which the estimate unit rates are to be increased or decreased, the same percentage figure being applicable to all the items.

But increases or decreases the final amount by the percentage figure above or below quoted by the contractor, respectively.

It is seen while discussing the above common forms of contracts that neither party is sure of the final cost of the project as will be built till the completion of the project.

In these days of increase price rise and absence of a satisfactory explanation to determine and pay escalation in the cost on a mutually agreed basis, contracting can be reduced to gambling or betting.

If the contractor is likely to lose heavily, he/she abandons the work midway to the detriment of the employer. If the employer has to pay in excess of the agreed contract sum, he/she runs the risk of financial difficulty.

An alternative form of a contract, which does not throw much risk on either party, is the cost-plus type contract.

The cost plus fixed fee contract differs from the cost-plus percentage type contract with respect to the determination of the fee to be paid to the contractor to cover overheads and profit.

The agreement specifies the fixed lump-sump to be paid to the contractor by the owner over and above the actual cost of the work.

In other words, the fee does not fluctuate with the actual cost of the work. This factor overcomes the possible weaknesses of the cost plus percentage type of contract.

However, in this case, there is no incentive for the contractor to do the work efficiently and to affect the economy in the cost of construction of the work.

If the fixed fee is to include the salaries of the contractor’s staff, the contractor will try to complete the work as speedily as possible to make maximum profit.

Even if the salaries of his/her staff are to be classified as part of the general costs of the work, he/she will try to expedite the project so that his/her men can be available for another contract to make an additional profit therefrom.

In respect of all other points, this form of contract is similar to the cost-plus percentage type contract.

By introducing an element of incentive for the contractor to carry out the work in the most economical way, an attempt is made in this form of contract to overcome the main drawbacks of the previous two types of cost-plus contracts.

This is achieved by suitably changing the nature of the agreement in respect of the fee payable to the contractor. The amount of fee is determined by reference to some form of a sliding scale.

Thus, the higher the actual cost, the lower is the value of the fee that the contractor receives and vice versa. From the owner’s point of view, this is one of the best “cost-plus” type contracts. The developed form of this contract is the target contract.

This form of contract is suitable for those cases where the owner is in a position to buy large quantities of materials at favorable rates and also deliver them to the site of work most economically.

For example, spreading and compacting metal and laying and fixing sleepers on the railway track.

This form of contract is comparatively of recent origin. It combines the best features of the cost plus percentage and the cost-plus fluctuating fee type contracts.

The contractor is paid on a cost-plus percentage basis for work performed under the contract plus or minus a certain amount, which is an agreed percentage of savings or excess affected against the target value.

The target value is arrived at by measuring the work on completion and valuing it at the rates agreed to earlier.

The negotiated contract is a case where the contract is awarded on the basis of a direct agreement with a contractor, by not going through the process of competitive bidding. It is otherwise called negotiated agreement.

This differs from an exclusive source situation, which takes place when: there is only one firm that is available and capable of carrying out and completing the contract, and/or the urgency of the situation dictates that the competitive procedure cannot be used.

A contract is a legally binding agreement between two or more parties to uphold terms in a relationship, as set forth by the contract.

The negotiated contract entails the process of discussing and compromising on contract terms and conditions in order to reach the final, approved draft of a contract. Some contracts are non-negotiable, in cases with leases and warranties extended by the manufacturers.

However, there are contracts business, real estate development, and finances that are negotiated in order to reach terms that are satisfactory to all parties involved.

A construction contract is a mutual or legally binding agreement between two parties based on policies and conditions recorded in document form. The two parties involved are one or more property owners and one or more contractors.

A lump sum contract is a construction agreement in which the contractor agrees to complete the project for a predetermined, set price. Under a lump sum agreement, also known as a stipulated-sum, the contractor submits a total project price instead of bidding on each individual item.

What Is a Contract Rate?

Contract Rate means, with respect to a Receivable, the rate per annum at which interest accrues under the Contract evidencing such Receivable. Such rate may be less than the “Annual Percentage Rate” disclosed in the Receivable.

In a basis contract you establish a price on the spread between the cash and the futures market. A basis contract is done when the spread is normal or narrower than normal, or when one thinks the basis will widen into the time frame one wishes to sell. … The combination of the two contracts will set a cash price.

What Does a Construction Contract Do?

A construction contract is an agreement between a client that wants construction done and a general contractor. This type of contract details the contractor’s scope of work, including their right to subcontract any of the work, how and what they will charge for the work, and any applicable plans or work orders.

What Is Included in a Construction Contract?

A construction contract is an agreement between a client that wants construction done and a general contractor. This type of contract details the contractor’s scope of work, including their right to subcontract any of the work, how and what they will charge for the work, and any applicable plans or work orders.

What Is Construction Contract Law?

The law of contract and the law of tort are central elements of construction law. … It looks at the formation of contracts—which may be written, oral, partly oral and partly written, or implied entirely from the conduct of the parties, and considers how the courts interpret contracts.

What Are the 4 Types of Contracts?

What Are the 3 Types of Contracts?

What Are the Types of Construction Contract?

What Are the 7 Elements of a Contract?

Seven essential elements must be present before a contract is binding: the offer, acceptance, mutual assent (also known as “meeting of the minds”), consideration, capacity, and legality. Contracts are typically in writing and signed to prove all of those elements are present.

Who Is the Employer in a Construction Contract?

What Are the Three Most Commonly Used Types of Construction Contracts?

How Do You Break a Construction Contract?

If either party to a contract finds the terms are unacceptable, the first and best option is to renegotiate for a new contract. In a construction context, this can mean paying for completed work that is acceptable and writing a new contract for the work that remains. Invalidate the contract.

What Are the Types of Contractor?

What Are the Most Common Types of Contracts?