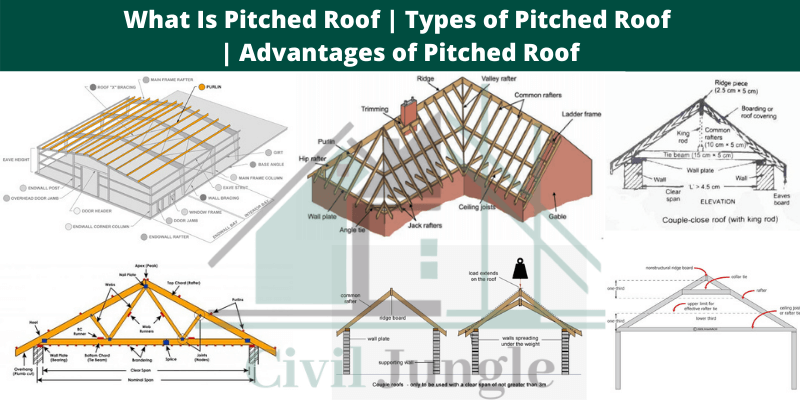 From the beginning of civilization, roofs are one of the essential structural components, necessary for building construction.

Roofs protect the building structure and the inhabitants from adverse atmospheric and exposure condition and also to enable privacy to its inhabitants.

The design and construction of a roof necessitate the consideration of several design factors among which, the element of drainage holds the most crucial role. Excellent Roof construction requires a careful review of all it’s dependent factors and the use of different roofing materials.

The design of drainage is widely dependent on the slope of the roof to be provided, based on which, the shelters are classified into two categories- Flat Roofs & Pitched or Sloping ceilings. These are the two types of roof structure.

Pitched Roofs are the roofs which generally slopes downwards in one, two or more parts (depending upon the design), at a certain angle from the central ridge (the central ridge is the highest point or peak in a sloping roof).

In earlier times, pitched roofs are constructed using timber, but modern construction techniques allow it to be built using concrete, having timber as it’s formwork surface.

This types of roofs are widely it was adopted in places where extreme rain and snowfalls occur, due to the adequate drainage, it provides over other choices.

These types of roofs are visually appealing and have a great look, so it’s also a suitable choice for traditional and modern houses, where there are no financial implications.

The difference of the pitched roof from the flat roof is that the slope of the flat roof is less than 10°, which only enables adequate drainage of rainwater in low to moderate rainfall regions, whereas, in the sloping roof, it generally varies between 45°-60°.

What Is Pitched Roof?

A pitched roof is a roof that slopes downwards, typically in two parts at an angle from a central ridge, but sometimes in one part, from one edge to another.

The ‘pitch‘ of a roof is its vertical rise divided by its horizontal span and is a measure of its steepness.

Depending upon the slope, environmental condition, aesthetic view, and number of sloping surfaces, the pitched roof are widely categorized into the following types 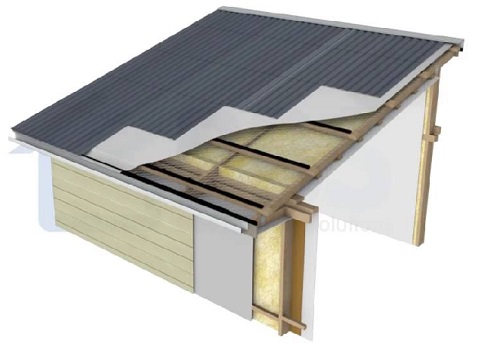 This is the simplest form of Pitched roof, where the number of the sloping surface is one, I.e. It is a single sloping roof surface often not attached to another roof surface.

This type of roof usually takes the look of an equilateral triangle where one is connected with the central ridge, and the other end, overhangs. It can be denoted by various names such as shed roof, lean-to roof, pent roof & skillion roof.

The slope of the mono-pitch roof is the ratio between its rise (considered from the lowest point of the ridge), and it’s span (considered the horizontal distance the roof covers).

Mono-pitch roofs are generally constructed using a set of principal ties, struts, principal rafters and angle purlins to enable the placing of roof coverings or sheets.

Also, Read : Difference Between One Way Slab and Two Way Slab | What is Slab 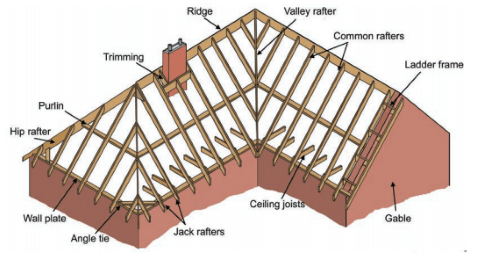 This is the most widely used pitched roof, where the number of a sloping surface is two, that is, there are two sloping surfaces in the opposite direction. In other words, it is the combination of two mono-pitch roofs.

The structure of double pitch roof is similar to that of a quadrilateral triangle. The material used for this type of roof structure is a single set of principal ties, two sets of principal rafters, struts, angle purlins used to place the roof coverings. 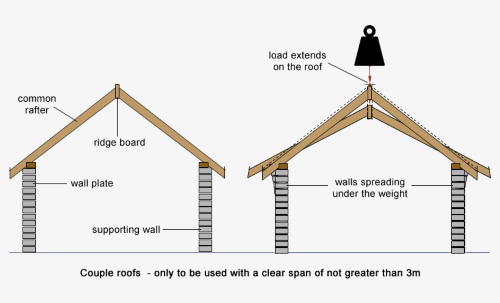 Being referred to as the simplest form of roofing system, it is similar to that of the Gable roof or Double pitch roof, the only difference is that couple roof can be constructed at meagre cost and can be erected very fast.

The materials used for the construction of a couple close roof essentially timber.

At first, the wall plates are fixed on both the supporting walls (which most of the case is Masonry Pillar) and a ridge piece is fixed at the central ridge. One end of the principal rafters are placed on the ridge piece, and the other end, on the wall plates.

Sheeting (which are generally A.C, G.I sheets or Mangalore tiles) are provided over the angle purlins, which are placed over the principal rafters.

Couple roof is usually suitable in places, where the maximum span is limited to 3.7 meters. 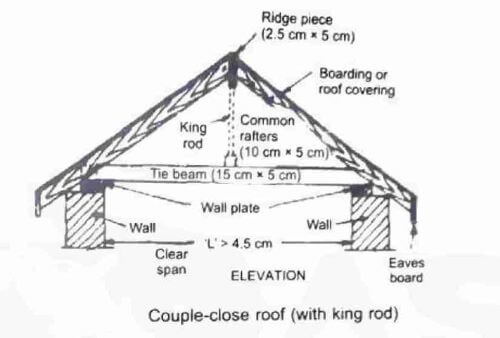 The tie provided in the roof runs from the wall plate of one pillar to the other wall plate; in other words, it covers the entire horizontal span of the top.

The horizontal ties are nailed to the rafters and also with the walls plates. Wood and steel (channel sections) are widely used material for the manufacture of horizontal relations. 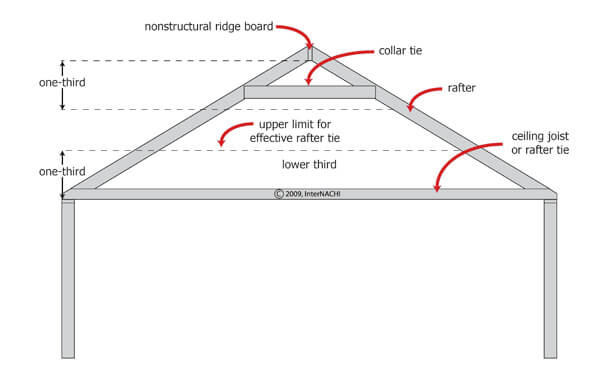 Collar Beam Roof is very similar to that of the couple close roof, the only difference is that in a collar beam roof, a collar tie is provided, instead of a horizontal tie, which runs from one wall plates to the other.

A collar tie is a horizontal structural member between the rafters, which is raised from the feet of the rafters to almost the middle of it.

Collar ties should not be fixed by more than one-third or one-half of the rise of the roof, from the wall plate.

When the clear span of the roof increases, or when weighty loads are applied, the rafters show a tendency to bend. To prevent that, the collar ties are provided, which stops the sagging of the rafter under excessive loading conditions or in high spans.

This type of roof is used where the clear span is between 4.4-5 meters, having the ideal span of 4.8 meters.

Also Read: Requirements of Good DPC | Prevention of Dampness: Use of DPC | Methods of Damp proofing 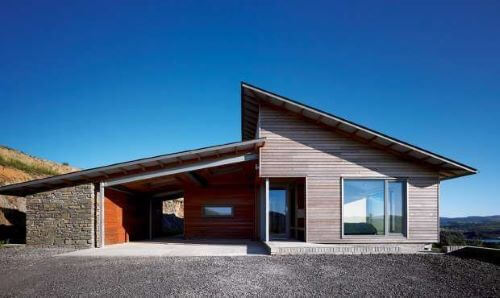 A hip, or hipped, the roof is a gable roof that has sloped instead of vertical ends. The gambrel roof is a type of gable roof with two slopes on each side, the upper being less steep than the lower.

Although not much, there are a few disadvantages of using the Slanting roof, which is mentioned as follows: 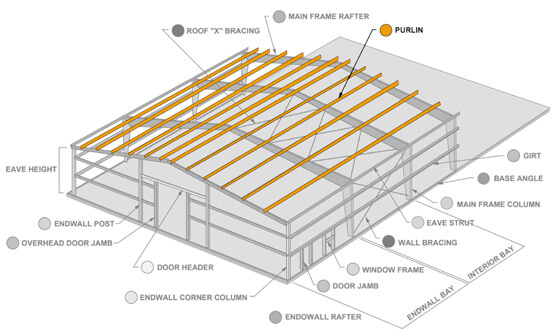 A purlin is a longitudinal, horizontal, structural member in a roof. In traditional timber framing, there are three basic types of purlin: purlin plate, principal purlin, and common purlin.

Purlins also appear in steel frame construction. Steel purlins may be painted or greased for protection from the environment.

A king post is a central vertical supporting post used in architectural, bridge or aircraft design applications. A king post extends vertically from a crossbeam to the apex of a triangular truss.

Instead, the king post is held in place by a collar beam, a secondary beam parallel to the tie beam. In this structure, the central post is termed the crown post.

The king post truss is used for simple roof trusses and short-span bridges. It is the simplest form of truss in that it is constructed of the fewest number of truss members. The truss consists of two rafters, one horizontal beam, serve as a ceiling joist.

A pitched roof is a roof that slopes downwards, typically in two parts at an angle from a central ridge, but sometimes in one part, from one edge to another. The ‘pitch’ of a roof is its vertical rise divided by its horizontal span and is a measure of its steepness. For more information, see Flat roof.

A pitched roof is a roof that slopes downwards, typically in two parts at an angle from a central ridge, but sometimes in one part, from one edge to another. The ‘pitch‘ of a roof is its vertical rise divided by its horizontal span and is a measure of its steepness.

What Is Best Pitch for a Roof?

Conventional slope roofs, with a pitch between 4/12 and 9/12, are the most common in residential work.

A pitched roof is a roof that slopes downwards, typically in two parts at an angle from a central ridge, but sometimes in one part, from one edge to another.

Why Do Houses Have Pitched Roofs?

This type of roof is more commonly seen in residential homes, as the space directly underneath it is an attic. It’s easier for water to drain on a pitched roof compared to a structure that’s more flat. However, they’re also generally harder to maintain given their steep slopes.

What Is the Best Roof Pitch for a House?

Conventional slope roofs, with a pitch between 4/12 and 9/12, are the most common in residential work. Roofs with a pitch exceeding 9/12 (37 degrees) are termed steep slope roofs.

For a typical roof pitch to use for a traditional house, you should start with the 4/12 pitch cited above, but anything falling in the range between 4/12 and 9/12 is pretty common. If your pitch is lower, you will see it sporting a slight angle, hence the term low-slope roofs for them.