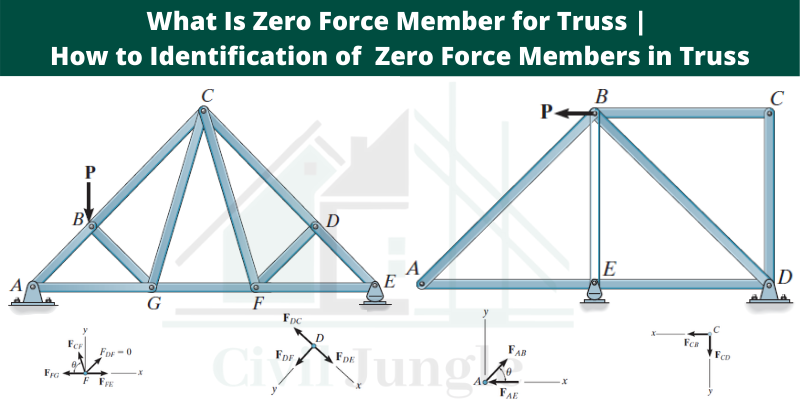 What Is Zero Force Member?

In a truss system, some members are not carrying any force. This called a zero-force member.

This member may be added to increase truss stability. Identifying these members will simplify the process of analyzing truss.

What Is Zero Force Member for Truss?

Truss analysis using the method of joints is greatly simplified if one is able to first determine those members that support no loading.

These zero force members may be necessary for the stability of the truss during construction and to provide support if the applied loading is changed.

The zero-force members of a truss can generally be determined by inspection of the joints, and they occur in two cases.

Consider the truss in above Fig -1 (Truss). The two members at joint “C” are connected together at a right angle and there is no external load on the joint.

The free-body diagram of joint “C”, Fig – 2 (Truss Joint), indicates that the force in each member must be zero in order to maintain equilibrium.

Furthermore, as in the case of joint “A”, Fig – 3 (Truss Joint) this must be true regardless of the angle say θ. between the members.

Zero-force members also occur at joints having a geometry as joint “D” in above fig -4 (Truss).

Here no external load acts on the joint, so that a force summation in the y-direction, Fig – 5 (Truss Joint), which is perpendicular to the two collinear members, requires that FDF = 0.

Using this result. “FC” is also a zero-force member, as indicated by the force analysis of joint “F”, Fig – 6 (Truss Joint).

Then, if only two non-collinear members form a truss joint and no external load or support reaction is applied to the joint, the members must be zero-force members, Case 1.

Also, if three members form a truss joint for which two of the members are collinear, the third member is a zero-force member, provided no external force or support reaction is applied to the joint, Case 2.

Particular attention should be directed to these conditions of joint geometry and loading. since the analysis of a truss can be considerably simplified by first spotting the zero-force members.

How to Identification of  Zero Force Members in Truss?

Because trusses are usually designed to support several different loading conditions, it is not uncommon to find members with zero forces in them when a truss is being analyzed for a particular loading condition.

The analysis of trusses can be expedited if we can identify the zero-force members by inspection.

Two common types of member arrangements that result in zero-force members are the following:

If only two noncollinear members are connected to a joint that has no external loads or reactions applied to it, then the force in both members is zero.

If three members, two of which are collinear, are connected to a joint that has no external loads or reactions applied to it, then the force in the member that is not collinear is zero.

In the field of engineering mechanics, a zero force member is a member (a single truss segment) in a truss which, given a specific load, is at rest: neither in tension, nor in compression.

If three members form a truss joint for which two of the members are collinear and there is no external load or reaction at that joint, then the third non-collinear member is a zero force member, e.g., DA. Find: The forces in each member of the truss.

What Are Zero-Force Members in a Truss?

Why Are There Zero-Force Members in Trusses?

Zero force members are used to increase stability and rigidity of the truss and to support various loading conditions.

Why Do Some Members in a Truss Carry No Load?

These special types of members called zero-force members ensure the truss stays in a particular shape as a rigid body, but carries no load. Zero-force members are members that you can tell just by inspection that they carry no load. They are important to the structure to ensure it stays in a rigid shape.

Can a Truss Have Multi Force Members?

A frame is a multi-part, rigid, stationary structure primarily designed to support some type of load. A frame contains at least one multi-force member, which a truss never has.

How Do You Find the Force Members of a Truss?

What Is Zero Member in a Truss MCQ?

Rule for zero member force: At a joint, if three members are meeting, two members are collinear (same line), then force in the third member is always zero (if there is no external load at that joint).

Can You Remove Zero Force Members in a Truss?

To find the zero force members of a truss or any system you need to prepare a free body diagram of the system. In theory if you remove a zero force member the system will continue to remain stable, but you will remove redundancy.

Which of the Following Are 0 Force Members from Above?

Why There Is No Moment in Truss?

As all members in an ideal truss are pin-connected (meaning the nodes cannot support any moments) the members themselves can only be loaded in compression or tension, not shear. Thus, they do not experience any moment either.

What Is the Role of Zero-Force Members Can They Be Removed Without Compromising Structural Integrity?

What Does It Mean When the Sum of Forces Is Zero?

The summation of forces will be equal to zero when no resultant forces are acting on a body or when its acceleration is zero and it carries constant velocity.

How Do Trusses Carry Loads?

Trusses are, normally, designed to carry axial forces in its members, which are either tension or compression or reversible tension/compression depending on the worst cases of loading and load combinations. Truss members are connected at joints using welds or bolts.

How Are Loads Transferred in a Truss?

A single-span truss bridge is like a simply supported beam because it carries vertical loads by bending. Bending leads to compression in the top chords (or horizontal members), tension in the bottom chords, and either tension or compression in the vertical and diagonal members, depending on their orientation.

What Are Loads Acting on Truss Member?

Two categories of loads on trusses can be distinguished: dead load and life load. Dead loads for roof structures are basically the own weight of the materials used. These forces act vertically.

How Do I Know If a Truss Is Load Bearing?

If the wall in question is parallel to the joists/trusses, it will likely not be load-bearing. An example of a non-load bearing partition wall can be seen on the left. When joists/trusses are perpendicular to the wall and bear on the top of the wall, that wall is bearing wall.

Can a 2 Force Member Have a Moment?

A two-force member is a body that has forces (and only forces, no moments) acting on it in only two locations. In order to have a two-force member in static equilibrium, the net force at each location must be equal, opposite, and collinear.

Can You Have Zero Net Force?

When an object is in equilibrium (either at rest or moving with constant velocity), the net force acting on it zero.