As a component of a bridge, the abutment provides the vertical support to the bridge superstructure at the bridge ends, connects the bridge with the approach roadway, and retains the roadway base materials from the bridge spans.

Although there are numerous types of abutments and the abutments for the important bridges may be extremely complicated, the analysis principles and design methods are very similar.

In this article, the topics related to the design of conventional highway bridge abutments are discussed and a design example is illustrated.

Unlike the bridge abutment, the earth-retaining structures are mainly designed for sustaining lateral earth pressures.

What Is Bridge Abutment?

A bridge abutment is a substructure that supports one terminus of the superstructure of a bridge and, at the same time, laterally supports the embankment which serves as an approach to the bridge.

For a river bridge, the abutment also protects the embankment from scour of the stream.

Bridge abutments can be made of masonry plain concrete or reinforced concrete.

The types of Abutments are as follows. A closed abutment is a full-height wall with wing walls on each side that retains the full height of the approach embankment. This type of abutment minimizes the required span length of the bridge. However, there are several significant disadvantages, especially for high embankments and embankments on soft foundations.

The abutment must be constructed before the adjacent embankment. Proper placement and compaction of backfill are difficult in the restricted area between the and the wing walls. If heavy equipment is used to compact the backfill, the wall may be pushed laterally and out of vertical alignment.

Closed abutments must be designed for the lateral earth pressures exerted by the full height of the approach embankment. Rankine earth pressure theory or equivalent fluid pressures conventionally are used.

Because the lateral force and the overturning moment about the base of the wall are proportional to the square and the cube of the wall height, respectively, the structural requirements and cost of the wall increase rapidly with height. A stub or perched abutment is a relatively short abutment that is constructed after the embankment has been completed. The embankment can be compacted without interference from the abutment, and, if necessary, the abutment construction can be delayed until the compression of the foundation soils caused by embankment loads is completed.

Thus, post-construction settlements may be minimized. The abutment may be supported on spread footings in the embankment or on piles or drilled shafts constructed through the fill, as shown in the above figure.

Because the stub abutment is relatively short and located in the upper part of the fill, the lateral earth pressure is relatively small in comparison to the pressure against a full-height closed abutment.

However, longer bridge spans may be required than for a full-height abutment. Stub abutments also are used on the natural ground in cut slopes. Spread footing, pile, or drilled shaft foundations may be used. Pedestal or spill-through abutments are short stub-type abutments supported on pedestals or columns extending to the natural ground. As with closed abutments, the abutment must be constructed before the approach embankment.

Then the fill is placed simultaneously on both sides of the pedestals to minimize the unbalanced earth pressure and the lateral movement of the abutment. However, the fill around the pedestals is very difficult to compact properly. It also is very susceptible to erosion unless the end slope is protected with paving, riprap, etc.

The lateral earth pressures against a spill-through are less than for a full-height closed abutment but greater than for a stub abutment. The weight of the fill that is placed after the construction of the abutment may cause compression of soft foundation soils and the same detrimental post-construction effects that have been described for closed abutments.

Also, read: Difference Between Bridge and Culvert | What Is Bridge | What Is Culvert

Integral end bents are stub abutments that are rigidly connected to the superstructure without expansion joints. The connection is designed for full transfer of thermal stresses from the bridge deck to the abutment.

The elimination of expansion joints with movable bearing systems for the deck is reported to reduce construction and maintenance costs. Various designs are used by different state agencies, but almost all require steel H-piles for support of integral abutments. A typical integral end bent is shown in the above figure.

Integral abutments have been used in the United States for about 30 years. Early applications in Kansas, Missouri, Ohio, and Tennessee were restricted to relatively short bridges, generally less than 100 ft (30 m) long.

Today integral abutments are used in more than half of the states, and the allowable lengths have increased significantly. Greimann et al cite the successful use of integral abutments for continuous-steel and concrete bridges with lengths of 300 ft (90 m) and 500 to 600 ft (150 to 180 m), respectively.

Almost all states that use integral abutments on piles indicate that they are performing well. Despite the apparent increasing popularity of integral abutments, some problems have been noted. These problems generally are related to cyclic lateral movements of the abutment in response to thermal stresses in the bridge deck.

Groundwater or surface water that enters the backfill through pavement cracks accelerates the erosion process. 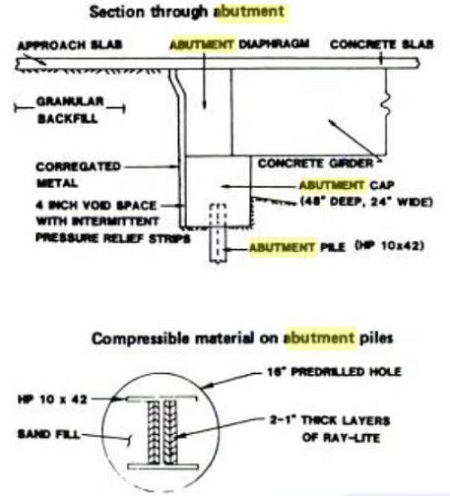 Some states use special details to accommodate the cyclic abutment movements. For example, one North Dakota design, which is illustrated in the above figure, provided a pressure relief system between the backfill and the but merit.

Narrow vertical strips of 4 in  (100 mm) thick compressible material were attached at 4 ft (1.2 m) intervals along with the hack of the abutment. Corrugated metal sheets were placed behind the compressible strips to maintain a 4 in (100 mm) void between the abutment and the backfill.

Also, to facilitate lateral movement of the H-piles, 2 in (50 mm) thick compressible material was glued to both sides of the upper 20 ft (6 m) of the web. An oversize hole was drilled to a depth of 20 ft (6 m), and the pile was placed in this hole and driven to a depth of approximately 110 ft (33 m).

Also, almost all agencies require steel H-piles for support of integral abutments, on the assumption that this facilitates lateral movement.

Currently, there is no evidence to support this hypothesis. Significant savings could be realized if it were demonstrated that integral abutments on spread footings will perform as well as those supported on piles.

Also, read: Difference Between Flyover and Bridge | What Is Flyover | What Is Bridge Mechanically stabilized walls, also have been used to support bridge abutments. The bridge seat and footing are supported directly on the reinforced backfill, as shown schematically in the above figure.

The design concepts for the mechanically stabilized walls are applicable. The abutment loads increase the reinforcement requirements, especially in the upper part of the backfill, where the bridge loads are concentrated.

However, the facing elements are not affected because the facing does not support structural loads. There are many proprietary systems that are based on different design assumptions, but generic design procedures are recommended by Mitchell and Vinci and Christopher et al.

Because mechanically stabilized abutments can tolerate large deformations, they often are an economical alternative to deep foundations or treatment of soft foundation soils.

For example. in 1972 mechanically stabilized abutments were used for a bridge across the Moselle River at Thionville, France because large approach fills settlements were anticipated.

The abutment was surcharged until 12 in (0.3 m) of settlement occurred and then the superstructure was constructed. Six months after completion of the superstructure, the bridge seat was jacked 2.4 in (60 mm) to compensate for additional settlement.

Since the bridge was opened to traffic, less than 0.5 in. (12 mm) of settlement has been observed. Because the abutment and approach fill settle as one unit, a differential settlement between the bridge deck and the approach roadway is virtually eliminated.

The speed and case of construction have contributed to the wide-spread use of mechanically stabilized abutments in the United States. 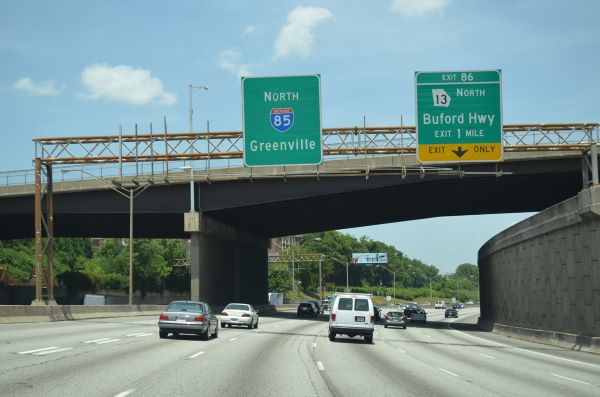 Abutments support the ends of the bridge and transfer the loads from the superstructure into the ground. The abutments also support the bearing devices and the backwalls. Abutments are usually constructed of concrete. There are various types of abutments including wall, stub, integral, and semi-integral.

How Are Bridge Supports Built in Water?

When bridges requiring piers are built over a body of water, foundations are made by sinking caissons into the riverbed and filling them with concrete. Next, the anchorages are built on both ends, usually of reinforced concrete with embedded steel eyebars to which the cables will be fastened.

1 thought on “What Is Bridge Abutment | 5 Types of Abutments”