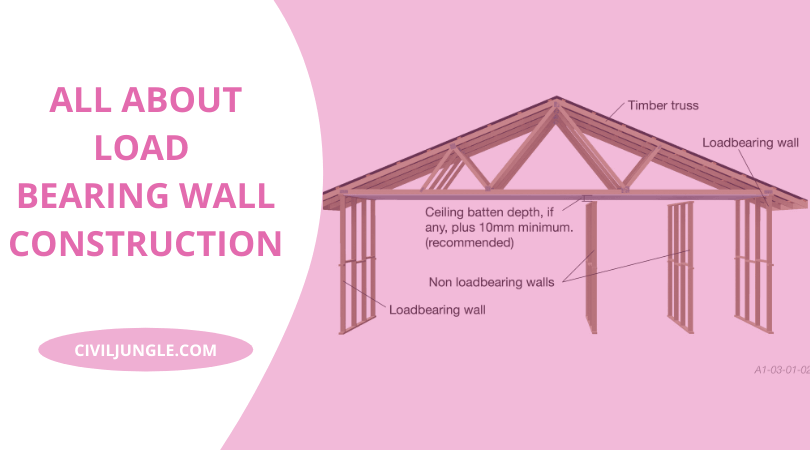 Load Bearing Wall Construction was most widely used form of construction for large buildings from the 1700’s to the mid 1900’s.

Load Bearing Wall Construction consists mainly of thick, heavy brick or stone walls that support the entire structure, including the horizontal floor slabs, which can be made of reinforced concrete, wood, or metal parts.

The key point about Load Bearing Wall Construction is that the entire wall acts as a load-bearing element.

In a Load Bearing Wall Construction, you can’t punch holes in the wall to connect two rooms or you could damage the building if you did.

The heavy weight of the walls actually helps to strengthen the structure and stabilize it against external forces such as wind and earthquakes.

In traditional European Load Bearing Wall Construction, the floor slabs were made of horizontal wooden beams, joists, and planks. A joist is a small wooden beam that rests on two large beams.

What Is Load Bearing Wall? A load-bearing wall is a wall that is an active functional structure of a building, which carries the weight of the building above it, then transfers the total weight to the foundation structure beneath it.

Load-bearing walls are one of the first methods of construction. The construction of the flying buttress in Gothic architecture allowed the buildings to keep the interior open, transferring more weight to the buttresses instead of the central walls.

The birth of the skyscraper era and the simultaneous growth of steel as a more suitable framing system, as well as the limitations of load-bearing construction on large buildings, led to a decline in the use of load-bearing walls in a large scale commercial structures.

A load-bearing wall is a functional structure of a building, which carries the weight of the material and structure above the said wall resting upon it by transferring its weight to the foundation structure.

The materials most commonly used to build load-bearing walls are concrete blocks or brick for large buildings.

In contrast, the curtain wall does not provide significant support for the structure beyond what is needed to carry its own materials or conduct such loads onto a load-bearing wall.

Also, Read: What Is Superstructures | Difference Between Load-Bearing and Framed Structures

How to Tell If a Wall Is Load Bearing? Also, Read: What Are Walls | Classified of Walls | Load-Bearing Vs Partition Walls A good way to make small or narrow rooms large is to remove the wall between the adjoining rooms. When you replace a load-bearing wall with a load-bearing beam, you create a larger, more usable floor area and give your home a more spacious feel.

Load-bearing walls cannot be removed without installing a building system, such as a Load Bearing beam, to replace an existing wall.

Loose walls do not carry a load (weight of the building) above them and can usually be removed without worrying about cracking or caving of the house.

Also, Read: 10 Different Types of Loads on Structures| What Are Structural Loads

How Wide of an Opening Can You Have on a Load Bearing Wall? Load-free or Non-Load Bearing walls are installed inside the house and do not support any building weight. Non-Load Bearing Wall does not bear the additional weight of a building structure; they can only bear their own weight.

Non-Load Bearing Wall is used primarily as room dividers and in particular, do not serve any other purpose.

One can quickly distinguish Non-Load Bearing Wall by simply looking at the beams on their roof or in the basement. When joists and beams run parallel to a wall, they are often considered non load-bearing walls.

One can remove Non-Load Bearing Wall without compromising the safety of the building as they are not responsible for the support of gravity of your property.

It is always a good idea to take professional advice and guidance before proceeding with these actions.

Aside from the variety of private gardens, the Non-Load Bearing Wall appears only when loads are carried by other members, such as on heavy logs and other skeleton frames.

Modern steel and reinforced concrete frames require only the outer walls of the shelter and sometimes carry them down to allow easy access.

Since the wall rests on the members of the frame, it becomes a screen and admits treatment in any weatherproof material.

Traditional materials are commonly used, but simple walls of glass, plastic, alloys, wood products, etc., can work equally well. This freedom of choice even extends to the walls and offers the greatest opportunity for artistic expression.

A wall that does not help the building to stand and hold itself is known as a Non-Load Bearing Wall Framing. This wall is also called the “curtain wall”.

A load-bearing wall does not support the roof loads on the floor above. Non-Load Bearing Wall Framing is not part of a building framework.

Most of the time, it is the interior walls whose purpose is to divide the floor into rooms. They are built to be simple to reduce the dead load of the building.

They are not responsible for supporting the gravitational pull of this asset. It costs effective.

The following are the types of load-free walls based on the unit of wall used:

How to Make a Load Bearing Beam? Also, Read: What Is SBC of Soil? | Safe Bearing Capacity of Soil

A load–bearing wall or bearing wall is a wall that is an active structural element of a building, which holds the weight of the elements above it, by conducting its weight to a foundation structure below it. Load–bearing walls are one of the earliest forms of construction.

On the other hand, non-load bearing walls are placed inside the house and do not support any structural weight of the building. They don’t bear any additional weight of the house’s structure other than their own. These walls are used primarily as room dividers and mostly serve no other purpose.

How to Identify a Load Bearing Wall?

Also, Read: Live Load Vs Dead Load | What Is Load in Civil

How to Tell If a Wall Is Load Bearing?

If a wall is marked as “S” in the blueprint, this means “structural,” thus showing it’s a load–bearing wall. Check your ceiling – Take a look at your ceiling to identify any load–bearing beams that run across the house. Any walls beneath these beams are probably also load bearing.

How to Determine If a Wall Is Load Bearing?

If a wall is marked as “S” in the blueprint, this means “structural,” thus showing it’s a load–bearing wall. Check your ceiling – Take a look at your ceiling to identify any load–bearing beams that run across the house. Any walls beneath these beams are probably also load bearing.

How Wide of an Opening Can You Have on a Load Bearing Wall?

Any opening that’s 6 feet or less can have just one 2×4 under the beam. This creates a bearing point 1.5 inches wide. Any opening wider than 6 feet should have a minimum of two 2x4s under each end of the beam.

There are two types of walls in your home: load–bearing and non-load bearing. A load–bearing wall is a structural element that helps to transfer weight from the roof down to the foundation.

A load-bearing wall or bearing wall is a wall that is an active structural element of a building, which holds the weight of the elements above it, by conducting its weight to a foundation structure below it. Load-bearing walls are one of the earliest forms of construction.

Automatically, builders know that a two-by-four header means either an interior, non-load-bearing wall (one that doesn’t support the roof and a second story, if applicable) or an opening 3 feet wide or less. A regular header, on the other hand, must be used for load-bearing walls, whether interior or exterior.